This "reverse" pattern can be plotted as a function of a triangle, read by rows:

The $T(n,k)$ here represents an "(alternating) transformation of Pascal's triangle": 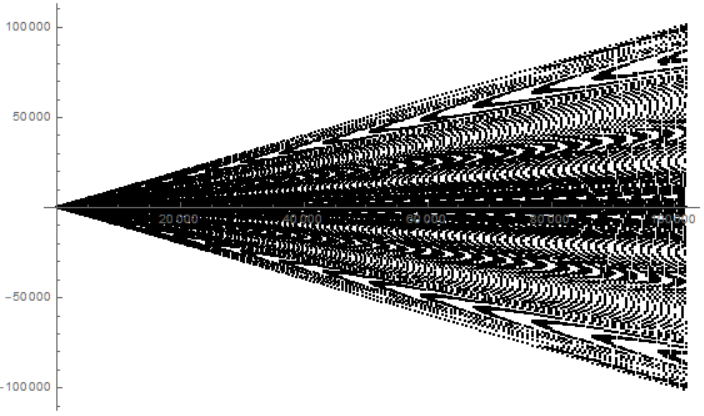 Or a similar example, but now $f(x)=\sqrt{x}$ (just the border changing example): 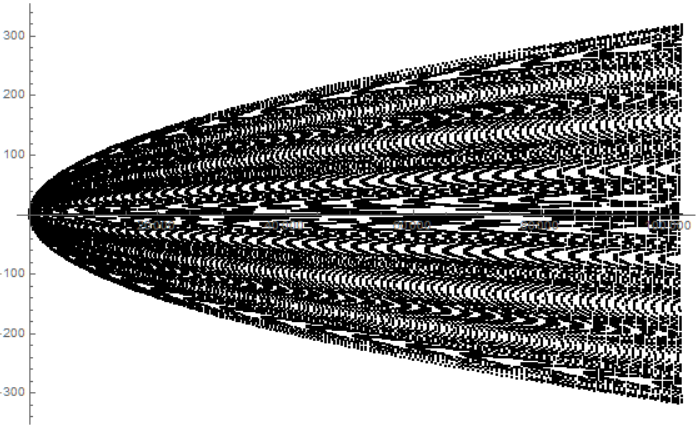 Question: How can we "explain" this pattern?

As of this update, my question boils down to: How can we describe these "arc" like, fractal like, patterns, in these plots of the "reverse/inverse" Pascal's pattern?

Can we relate them to similar structures, or "mathematically describe" and relate to some relevant results (theorems,...)?

Also, if we increase the base $b$, we get the "zooming in" effect. See gif at the end of the post.

For example, if the $F$ was the "normal Pascal's pattern (not reverse/inverse Pascal's pattern given above)", now given by taking the binomial coefficients modulo some prime number, then this pattern represents the Sierpiński triangle (also called Sierpiński gasket): 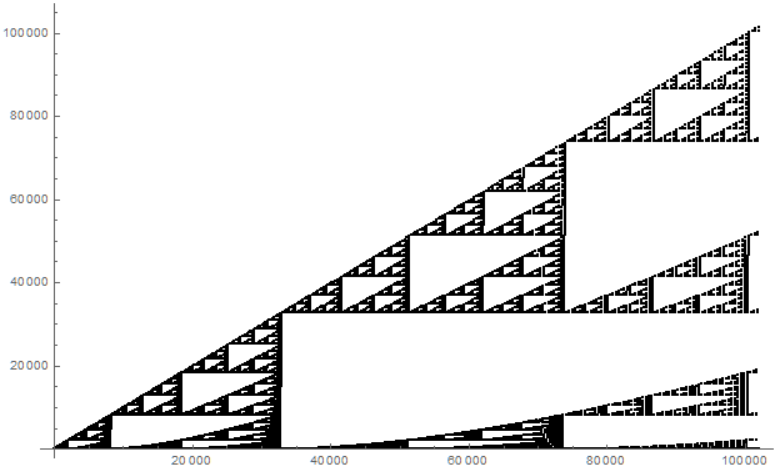 The answer to "explain this pattern" in this case, was given in a similar question regarding this pattern. - It was related to the Lucas' theorem.

In general, numbers in pascals triangle produce sierpinski-triangl-like fractals. Some examples can be seen in this answer and are explained in this answer.

If we take the last digit of numbers (binomial coefficients) in the pascals triangle, and color the $\ne0$ digits white, we get the following image shown below; (First $1024$ rows) 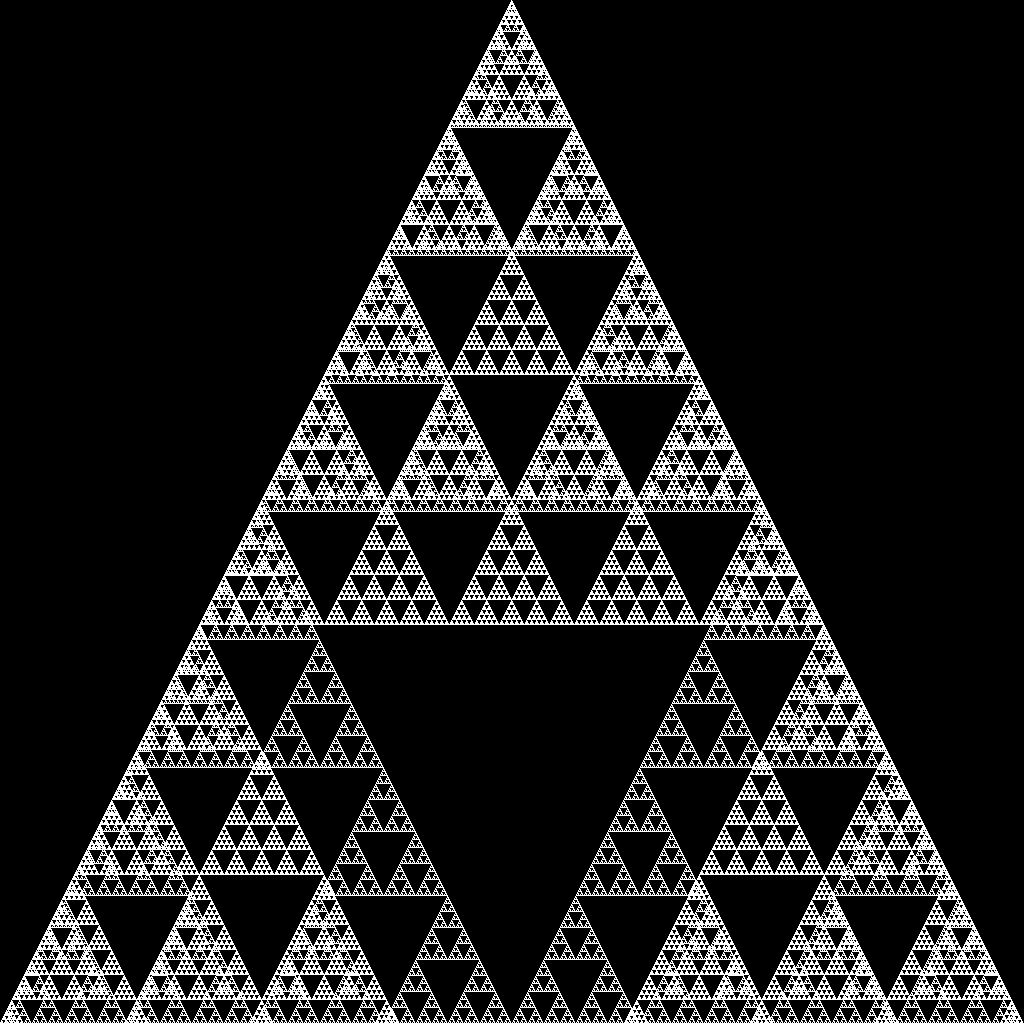 Note that multiple patterns seem to be overlapping in the picture above. This is discussed in the linked answers. Only prime numbers $m$ produce clean patterns, and composite numbers like $10$ above are a combination of multiple prime patterns.

The pattern below does not care if number base (in context of first/last digit) is prime or not. It seems that, that variable in the pattern below, is used as a "zooming" factor to the picture of the pattern. See the gif at the end of the post.

But what if we take the first digit, instead of the last one, in some number base?

For decimal case, we have the following image, for comparison to the above: ($b=10$) 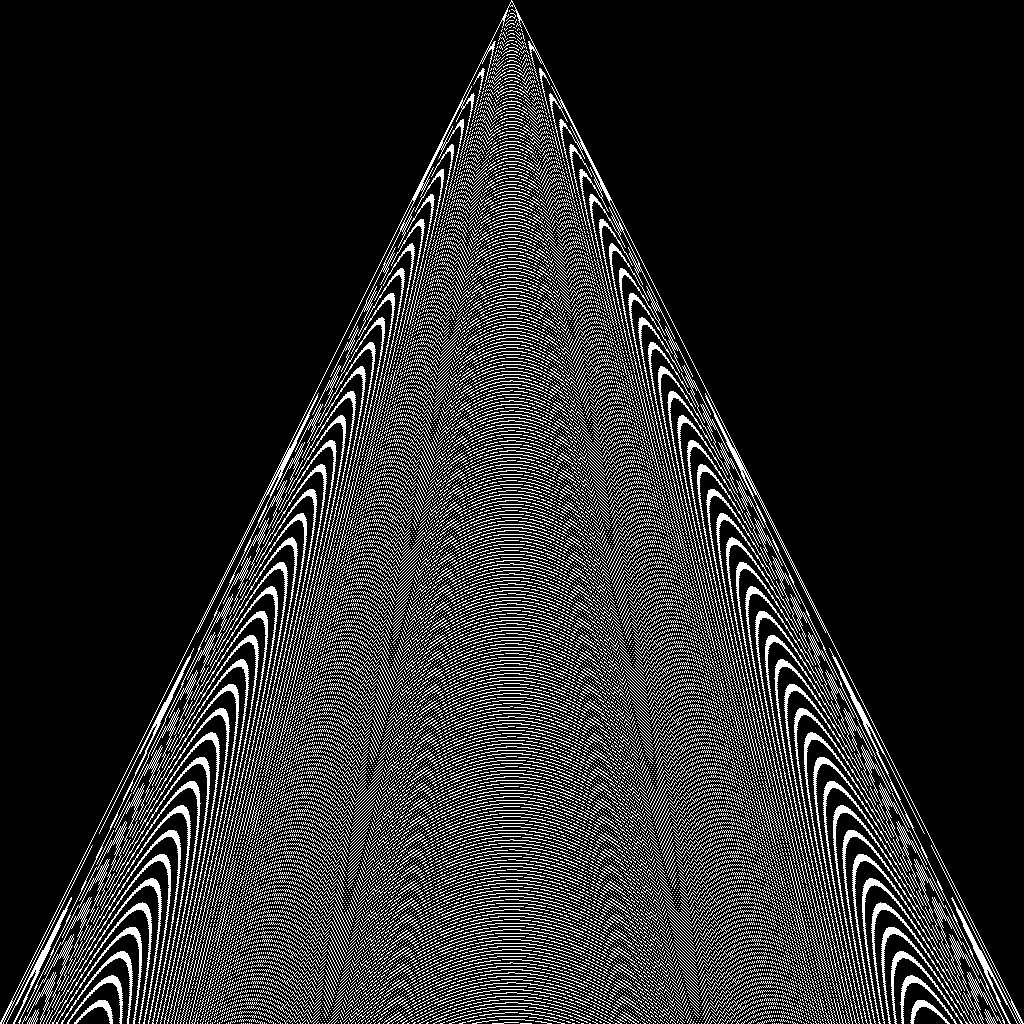 Where we colored the pixel if the first digit of the binomial coefficient is $"=1"$. (Since $0$ can't be the first digit) Similar pattern holds for any other single digit, in any other number base.

Why does this pattern appear in the pascals triangle, in all number bases?

Can it be somehow mathematically described or linked to any other things?

Like the first patterns links pascal triangle with sierpinski-triangle-like fractals, which can be explained for prime numbers by the Lucas' theorem (see linked answers) ?

When the number bases are increasing, it looks like its "zooming into the tip".