Prove that every convex function is continuous

I wonder whether any other version of this proof exists or not?

The pictorial version. (But it is the same as your inequality version, actually.) 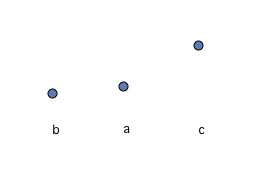 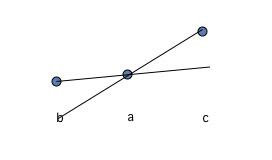 The graph lies inside the red region, 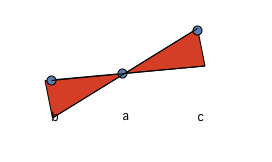 so obviously we have continuity at $a$.

This is an exercise in Rudin's Principles of Mathematical Analysis (Chapter 4 Problem 23 in the 3rd edition). The inequalities you quoted in "Usually it uses the fact ..." is a part of an exercise in the problem 23.

† There are three cases:

You can do a proof by contradiction.

We split our proof into 2 cases:

I would be careful to rephrase the query as:

Is there an alternative proof of the fact that a real-valued convex function defined on an open interval of the reals is continuous?

Since in general convex functions are not continuous nor are they necessarily continuous when defined on open sets in topological vector spaces.

An alternative might be to identify the point of discontinuity as x. Then there exists a point arbitrarily close to x, denoted x', whose value f(x') is bounded away by a constant from f(x). Depending on how you want your proof structured, you may think it sufficient to note that this implies the epigraph of the function is not closed and therefore the function is not lower semicontinuous. But every convex function on the reals is lower semicontinuous on the relative interior of its effective domain, which equals the domain of definition in this case.

A more general proof of this property is given in "Convexity and Optimization in Banach Spaces." The authors prove the proposition that every proper convex function defined on a finite-dimensional separated topological linear space is continuous on the interior of its effective domain. You can likely see the relevant proof using Amazon's or Google Book's look inside feature.

I think there's a neat proof, but maybe I made a mistake.

Although (its hardly mere I suppose) because the $(1)$ as defined in the question and $(2)$ below are, not, but are nonetheless "almost equivalent".

That is because under relatively mild conditions measurability, regularity conditions/boundedness conditions, midpoint convex function (in the sense of Jensen) are convex in the tradition .

Apparently a real valued midpoint convex function $(2)$ already satisfies the definition of convexity as above $(1)$, except for the restriction that $\sigma$ applies only to all rational numbers in the the unit interval (not just $2$, or dy-adics). That is before continuity is applied.

Its presumably a bit confusing the use the words 'in the sense of Jensen' for midpoint convexity.

This is because I believe that Jensen did, or helped develop the inequalities that any 'function' must satisfy, in order to be 'properly convex',as defined above in the question $(1)$.

Because Jensen well as the weaker notion of midpoint convexity $(2)$ which apparently is equivalent to $(1.a)$, at least if the domain is real valued, and which is named after Jensen (midpt convexity is often called jensen- convexity).

The best alternative proof (in my humble opinion) is a function is convex if and only if its epigraph is a convex set. If a function is NOT continuous then the epigraph can't be convex (obviously... draw a picture); but then by the above, the function can't be convex. This proof used the contrapositive.

Here is the picture of my proof

Here is a sort of dumb but hopefully straightforward approach.

Not the answer you're looking for? Browse other questions tagged real-analysis continuity convex-analysis or ask your own question.