Can a sphere be considered the limit of a regular polyhedron with infinite faces?

As for your first part of the question, since regular polyhedra, it is evident that one cannot talk about approximation proccedures. As for your second part, you can approximate the surface of a sphere with Goldberg Polyhedra but they are a little bit "out of context" if you are looking to mimic the "Method of Exhaustion" used in ancient times (for more about Goldberg Polyhedra, see here, for more about the "Method of Exhaustion" on two-dimensional shapes, see here).

It could be "better" to think as follows - with better I mean "historically more accurate":

Take a sphere and a maximal circle $C$ of it - this is a circle that occurs as the intersection of the sphere with a plane passing through its centre. Then consider two regular polygons $A_1A_2\dots A_n$ and $B_1B_2\dots B_n$ such that $A_1A_2\dots A_n$ is inscribed in $C$ and $B_1B_2\dots B_n$ is circumscribed to $C$, as follows (it is a regular dodecagon - 12-sided regular polygon): 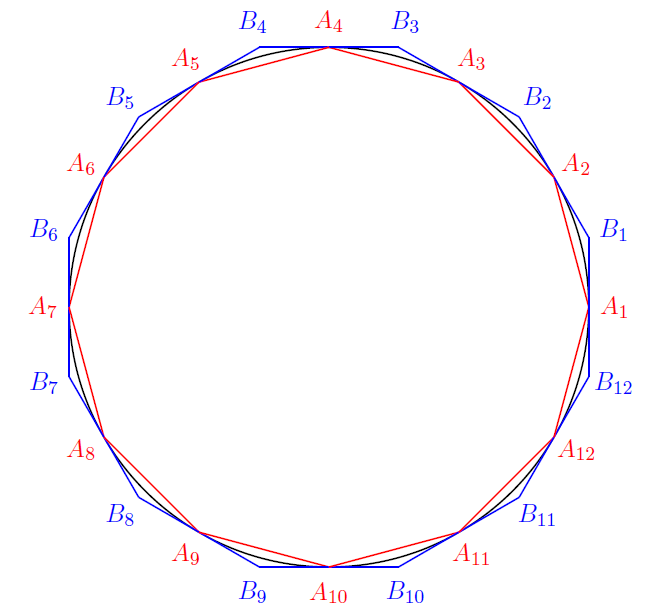 Here, the circle $C$ is in black and the two polygons are red and blue. Now, consider any diametre of the above circle, let $d=A_1A_7$, and rotate around $d$ this circle - this is a 3D rotation. So, the rotation of $C$ would give us the initial sphere and the rotation of the two polygons would give us two solids that are not, of course regular polyhedra, not even polyhedra, but they consist of parts of cones with generating line being each side of the initial polygon.

A theoretical solution could be this. One of the definitions of a polyhedra is that it is an intersection of half-spaces. Now, the sphere $S$ separable, so there is a sequence $(e_j)_{i=1}^{\infty} \subset S$ so that the points $e_j$ are dense in $S.$ Consider the unique half-spaces $H_j$ so that $e_j$ belongs to the boundary of $H_j$ and $S \subset H_j$. Consider the intersections $\bigcap_{j=1}^k H_j$ and let $k \to \infty$. Now, the boundaries of those polyhedra get closer and closer to sphere.

16
Why some functions are not integrable?

20
What property of certain regular polygons allows them to be faces of the Platonic Solids?
3
Is there a forumla to find out if n faces can be made into a 'regular polyhedron'?
10
Maximal volume for given surface area of an $n$-hedron
4
Surface area of platonic solids inscribed in unit sphere.
2
Can a polyhedron, made solely of regular pentagons and regular hexagons, be made with an arbitrarily large number of hexagons?
3
Existence of Platonic and Archimedean solids
2
Are all the Archimedean solids spherical/inscribed?
2
Archimedean Solids Definition: Is Uniformity Necessary?
9
How to show that if two Platonic solids have the same number of edges, vertices, and faces, then they are similar in $\mathbb{R}^{3}$?