In the paper that can be found in this link: https://arxiv.org/pdf/1712.00082.pdf
there is a definition of the geodesic curvature that I can't quite understand.
Here is how this article presents it:

Let $\vec{X}(s)$ be a curve on a 2D manifold in $R^3$ which is parametrized by the arc length $s$ as shown in the following figure.
Choose a vector function $\vec{V}(s)$ living in the tangent space at the position $\vec{X}(s)$ and is paralely transported along the curve. Then $k_g=\frac{d\theta}{ds}$, where $\theta$ is the angle between the velocity vector $\vec{T}=\frac{d\vec{X}(s)}{ds}$ and $\vec{V}(s)$, is defined as the geodesic curvature.
The paper states that the geodesic curvature $k_g$ reflects the deviation of the curve from the local geodesics. 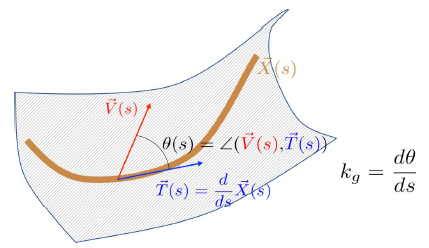 What I don't understand are the following:
$1)$ Since $\vec{T}=\frac{d\vec{X}(s)}{ds}$ and $\vec{V}(s)$ are both parallely transported along the curve(former is a velocity vector and later is given), then shouldn't the angle between them remain constant? In Riemannian geometry, when we parallel transport a vector along a curve, its angle with the velocity vector of the curve remain constant.
Is it that the author might not use an affine connection that is compatible with the metric, which is the property that an affine connection needs in order to preserve lengths of vectors and angles between vectors during parallel transport? (see for example Do Carmo's Riemannian geometry, p.53 on Riemannian connections)

$1)$ When we parallel transport a vector along a geodesic, its angle with the velocity vector remains constant. This is not true along an arbitrary curve $X:$ since the velocity $\dot X$ is not necessarily parallel, there's not much we can say about $\angle (\dot X, V).$ Think about simple examples in the Euclidean plane, where parallel just means constant.

One thing you should note from this is that the geodesic curvature $k_g$ of $X$ is zero if and only $X$ is a geodesic of the surface; so it is a sensible generalization of the curvature of a curve in Euclidean space, where curvature measures deviation from a straight line.

$2)$ The geodesic curvature can be defined for a curve in an arbitrary Riemannian manifold in exactly the same way, since parallel transport and angle measurements are intrinsic to the Riemannian structure. Alternatively, so long as $X$ is unit-speed we can simply define the geodesic curvature as the norm of the covariant acceleration of $X$.

Regarding the relationship to the Riemannian curvature, you shouldn't expect something direct: $k_g$ measures extrinsic curvature of a 1-dimensional object while $R$ measures intrinsic curvature of a higher-dimensional object. The closest link is probably the Gauss-Codazzi relations: for $M \subset N$ a Riemannian submanifold, the second fundamental form is just a way of packaging together the geodesic curvatures (with respect to $N$) of curves in $M$. The Gauss equation then tells us that the Riemannian curvature $R^M$ can be written in terms of $R^N$ and the second fundamental form of the inclusion.

7
Parallel transport along a 2-sphere.
0
Geodesic curvature and projection onto the tangent plane
15
Since the Curvature tensor depends on a connection (not metric), is it the relevant quantity to characterize the curvature of Riemannian manifolds?
4
Definition of parallel transport by M. Berry as a transport without twisting around normal vector
9
If all circles have constant geodesic curvature, does the surface have constant curvature?
0
characterization of curve on 3 dimensional manifolds
3
Derive the Jacobi equation from a specific geodesic variation