What are the effects of twists on a rectangular proportions?

Assuming we have a perfectly rigid rectangular cuboid object that cannot be stretched nor deformed in any way, but can be instantly reformed into a new arrangement so long as a specific set of criteria are met (think of this as its volume being melted down and perfectly recast into a new mould of the exact same volume), and this object is of: "X" thickness; "W" width; and "L" length (length in this instance is the measurement of the distance between the centers of both parrallel "WX" rectangular faces), and "V" volume. It must only be reformed into shapes that have the same exact volume as its original, and the same number of sides too.

If I recast the cuboid as a rectangular three dimensional strip [of "X" thickness and "W" width and "V" volume] that is twisted along its own central axis, by about 1/2tau radians [180 degrees] [a half rotation], so that the starting position and ending position of the two "WX" rectangular faces of the cuboid eclipse eachother when viewed "head on", what change in "L" will need to have been made to preserve the original volume?

ie: per unit of angle: for every rotation along it's length & around its central axis: how many units of distance between the two "XW" rectangular faces must be deducted to account for the surface alteration that was induced along the other four unnamed rectangular faces of the cuboid from the newly introduced threading form? 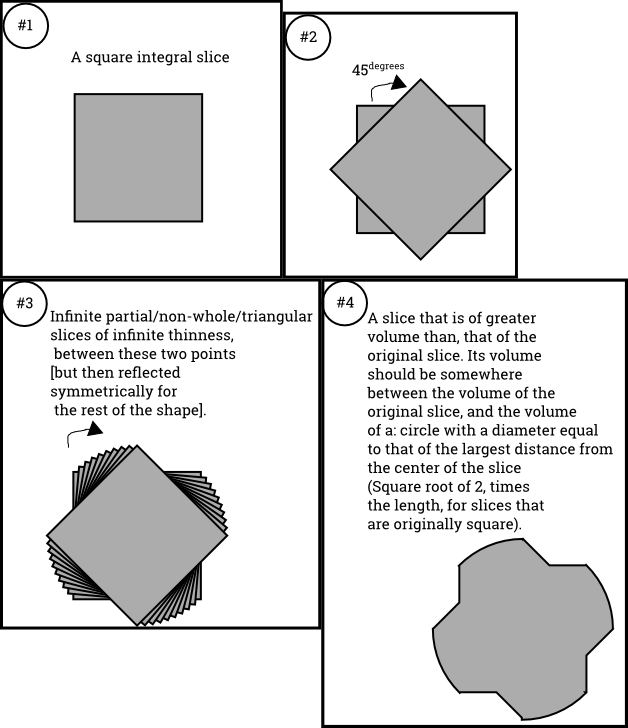 So, by "twisting" I did mean the conventional kind, like in the thread of a screw, but since twists have curvature related to that of a circle, rather than being totally straight diagonals; it is my my belief that there is some small change in the properties of the the length due to not all points neccessarily remaining parrallel once you have integrated them infinitely (made them perfectly smooth & or made them smooth-ish with randomized fractal granulation [if you wanna limit us to things that occur in nature]). The attached image is of a model of my reasoning; it is of a similar yet different scenario. I have explained it as a melt-able cube [who's density does not change when it changes phase] in a sculptable mould; if you melt the cube in an unaltered depression of itself: your melted cube's top-most surface remains at the same height as its unmelted self, because the cavity in the mould occupies the same volume as the orginal cube. If you were to twist the unmelted cube inside of the mould, the cavity of the mould would have to displace whatever sculptable material the mould was composed of (and for the sake of simplification: lets say that the mould's material displaceds upwards, and or: is just plain removed from existence once it has been displaced, so it will not fall back into the liquid cube and perform complicated deformation nor any other non-ideal shenanigans. It is an ideal mould) and, the internal cavity would change shape, to accommodate for the new circular shape, as it does in the attaches image. Now when you melt the cube: it's top-most surface, must decrease in height in-order for the cube to maintain the its original volume whilst simultaniously matching the 2D silhouette of the new mould cavity.

I may be wrong, but I imagine that if one were to twist the cube whilst simultaneously lifting it: it's mould would: again: begin to approximate a cylinder, a cylinder that is larger than the original cube, so, when you allow for it to be infinitely integrated and perfectly smooth: not all neccessarily have a parrallel slice that matches up to them perfectly [you know, due to sinewaves not behaving in straight lines], but... maybe I'm wrong, and also, now that I think about it: I just realized that I technically have 3 questions here, and not just 1 question, as I had originall thought. So I am going to go ask those 3 questions separately, so as to not be asking anything unclear.

But there was some of my reasoning, and some clarifications. Upon asking this, I was made aware of Cavaleiri's principal, but part of my gut it rebelling against that notion. It might just be a hard truth for me to swallow, or I may be about to realize something cool [like disproving it under certain circumstancez]. Either way. This question; I wpuld like it to be archived so that I can reference it in future questions related to it. If I am just a stubborn idiot: I would like to find a way to push myself through my mental blocks, "by force" if necessary [by which I mean, meticulous trying to prove the impossible to until I fail enough times to properly respect its impossibility]. But I clearly have one idea which is the opposite-ish thing to Cavaleiri's principal; but I may be confusing that with Cavaleiri's principal to create something of questionable worth.

In short: at present, I am of the mindset that once you make all the slices infinitely thin: Cavaleiri's principal no longer applies. It may be misguided, my "evidence" as some may try call it, is reasoning and not fact.

For the curious/helpful: my 3 new sub-questions are:

1) How much does the height of a polygonal prism decrease in height as it is used as a template to perform a rotational transform based alteration to a mould cavity before being melted down and poured back in as a volume which behaves like an ideal liquid with the same density it had as a solid? (this is not a physics question, I'm just using physical analogies, which aren't perfect, so I add constraints to simplify the ease of working with them).

-2) Are there a set of fixed guidlines for how to prove something mathematically, and if my first question provided examples that acted as unique proofs: could someone help walk me through the process of what I could do to prove them?-

-3) Is there a way that I could prove and/or disprove the notion that my first question provides evidence which shows an indication that infinitely smooth [continuous] curvature along a twisted object which used to be an un twisted shape: does tax that shape's volume's presence along the axis perpendicular to the plane of its twists, when those twists are perfectly smooth and not composed of any "stairs"? ("stairs" in this context is my word for the gap between the "slices" used by calculus to describe a given volume/body)-. 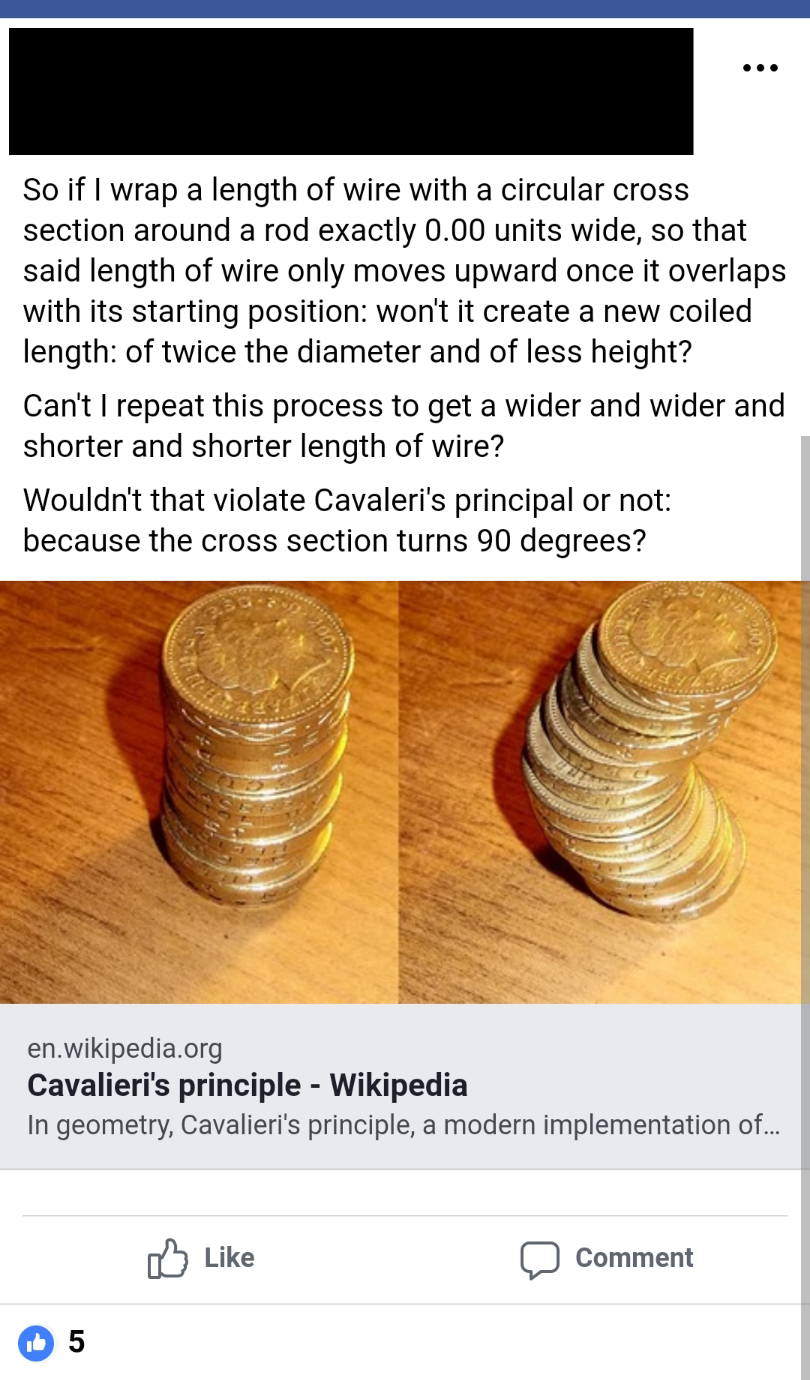 Edit: disregard questions "2)" & "3)" I made them as a result of observations which showed a decrease in height/length but that decrease was not wholly [nor likely at all] due to the "infinite smoothness and precision" of their curvature, it was instead likely due to the geometry of the materials I was using to test this theory; namely: thin rectangular strips of paper whose length did appear to change when twisting, but I think this was due to cross-sectional angles and such [rather than the "infinite smoothness and precision" as questions "2)" and "3)" assumed].

Addendum, while reviewing this, since the initial answers were correct yet did not sit well with me, I realized something. Mainly: that I was using rectangular strips of paper, and when twisted very tightly: the outer edges and corners: come inwards, meaning that they are effectively coiling around the centerline of the strip.

So; my question remains the same, but now I know which type of set of formula I was looking for initially, more details can be found in the text in the attached photo [a facebook post I made in a math group I'm a part of after the aforementioned epiphany which I'm not I sure I could ever word any better than I did there].

To clarify: I'm asking the same questions, but the new image should clarify what I mean by twisting, so the old answers are not technically invalid, however, they do/are incomplete because depending on how far & in what ways you "twist" the given length: there will be an effect which is between the two equations. The one I've been pointed to (cavalieri's principal), and the new one which reminds me of some old "do I have enough wire?" electromagnetic-coil equations I came up with forever ago (I will try to find those since they may be relevant), however it is not identical to those due to the range, I should also state that any angle greater than 45° for my coiling twists will by necessity result in: partial to full teleportation, by which I mean that coins coiled at 90° produce a stacked torroid meaning that when these coins are part of a series of coins and if these coins exceed the volume of the torroid than the first coin to precede the coin which meets with the starting coin must: by necessity jump to a wholly new location along the height axis of the coil: or else: increase the 'density' of the coins; & that: a uniform non-juttering nor 'density' altering path: can only be accomplished with an cross-sectional angle equal to or greater than 45° due to the fact that anything smaller than 45° will result in a self-intersecting path.

So: since this phenomenon obeys rules, and since it has surely already been observed: I am assuming [albeit there's a slight chance my assumptions could be wrong] that there are already a set of equations for this "coilage" and that they describe the resulting loss of height and resulting change in: 'density' & or 'smoothness' (see above about the 'teleporting' and 'change in density' for coils tighter than 45 degrees); what are they [these equations]? 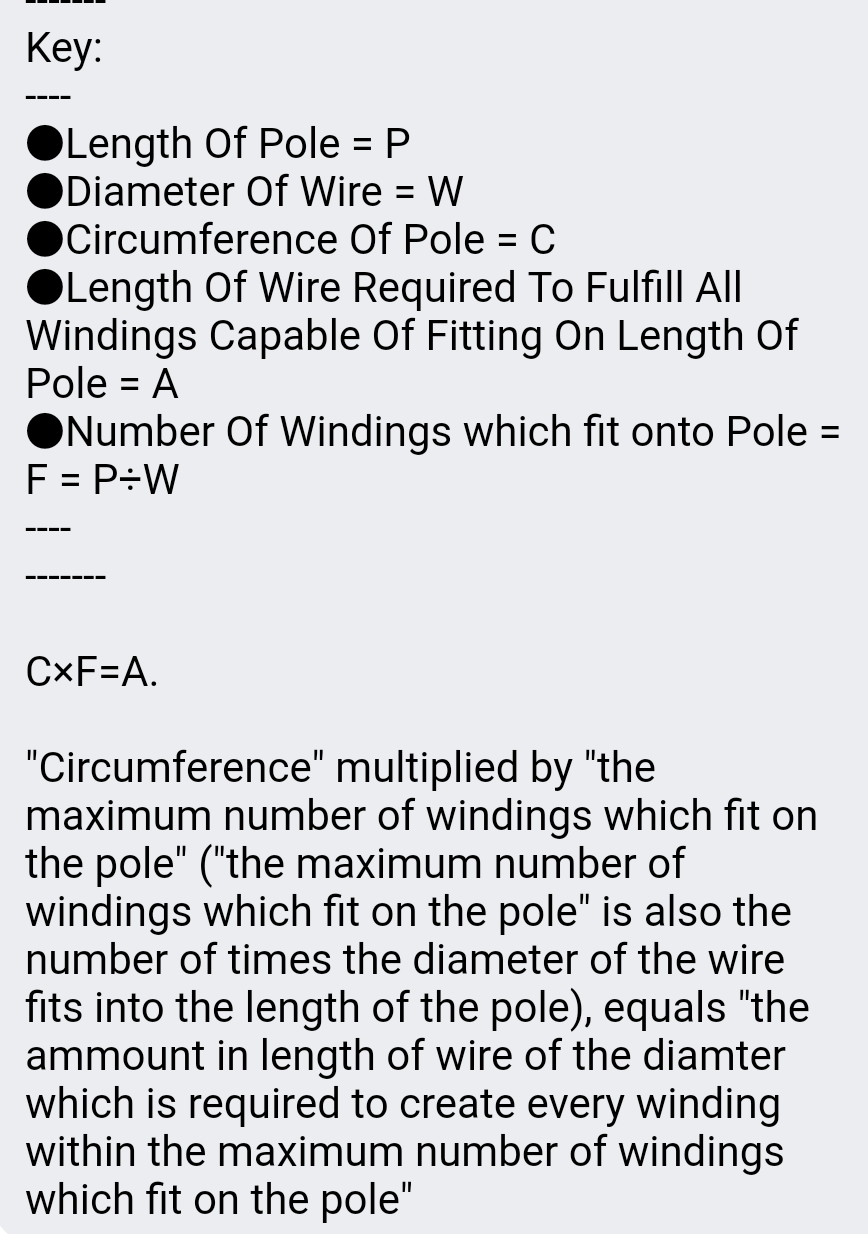 Believe or not, you don't need to shorten it at all. Look up Cavalieri's principle. As long as the area of every cross-section of your body is XW, it doesn't matter that those cross-sections are rotated (by an angle between 0 and $\pi$ or otherwise) - the volume will stay the same.

The intuition that the belt will shorten when you twist it probably comes from constraints of the material the belt is made of. This shortening actually either decreases the volume by compressing the material (which makes the material denser) or keeps the volume the same by slightly increasing the width, or both.

Not the answer you're looking for? Browse other questions tagged geometry volume angle or ask your own question.

1
Is it true that you need atleast 350 colors to color-in the boundries of a flat map where all the boundries are clearly defined?

1
Finding the derivative of an equation
0
Proving that cuboid of maximum volume in a sphere is a cube.
6
Is the volume of a cube the greatest among rectangular-faced shapes of the same perimeter?
0
Amy has a cuboid with volume at most 8
1
Determine the volume of the cuboid in cubic centimeters.
2
Volume of Pyramid.