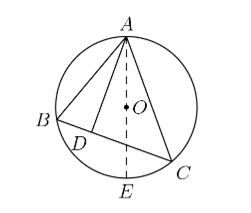 I managed to solve the problem above using my own method, but I'm having trouble understanding the "official" solution.

Most of this makes sense to me, but I don't understand why the solution states that $\angle AOC = 2*\angle ABC$.

I would really appreciate an explanation of how $\angle AOC$ is twice as large as $\angle ABC$.

Not the answer you're looking for? Browse other questions tagged geometry circles triangles angle or ask your own question.

3
Find an angle in a given triangle
1
Geometry: Measurements of right triangle inscribed in a circle
0
I want to determine the lenght of $x$ by making equations for each triangle ACD and ADB.
2
Angle bisectors and circumscribed circle
0
Find $\angle CAD$ in following figure.
1
If the bisector of an angle of a triangle also bisects the opposite side, prove that the triangle is isosceles.
0
Find angle CAD=x For triangle ABC ,D is a point inside triangle.
0
Problem on an isosceles right triangle, involving similarity and congruence
14
Find the missing angle in triangle