How is Lebesgue integration “partitioning the range”?

EDIT: I've added a clarification to the question below.

On Wikipedia, it says that Lebesgue integration corresponds to "partitioning the range".

Under the section, "Towards a formal definition," of this page, it shows how we can integrate a function $f$ by defining a new function $f^*$ from the range of $f$ to the measure of a subset of the domain of $f$. The integral is then the simple Riemann integral of $f^*$ (now over the range of $f$ instead of its domain).

However, in the book, "Measures, Integrals, and Martingales," the Lebesgue measure of $f$ is constructed using simple functions their supremum. (This also is done in the next part of the Wikipedia article.)

So what am I missing? And why does Wikipedia claim that Lebesgue integral partitions the range?

Edit: Just a maybe more clarifying formulation of the question: is the $f^*$ approach described in Wikipedia actually considered to be a "Lebesgue integral"? If so, how is it equivalent to the "supremum of simple function smaller than $f$" approach?

This definition of the Lebesgue integral (of a positive function) does not make any reference to a partition of the range:

EDIT: I don't really think the answers are satisfying. To show better what my question is: This is an example of a Lebesgue simple function approximation, which DOES NOT partition the range:

This in my view correctly describes the Lebesgue integral: 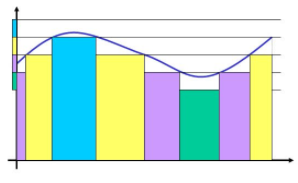 On the other hand, here is a picture of what supposedly Lebesgue integration is according to wikipedia: Supposedly, the Lebesgue integral partitions the range, and then sums the area of the horizontal rectangles in that range:

This in my view FALSELY describes the Lebesgue integral: (BLUE=Riemann, RED =Lebesgue, supposedly): 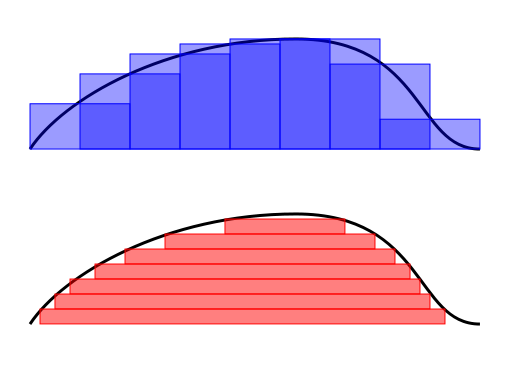 Riemann integration divides the domain into intervals, then each summand is the length of one of the intervals in the partition times a function value in that interval.

Lebesgue integration divides the range into intervals, then each summand is a number in one of the intervals in the partition times the measure of the preimage of that interval.

since every $s$ in $S(f)$ is also in some $S_n(f)$. But now that inner sup is given by a particular partition of the range of $f$ into $n$ subintervals.

Incidentally, the red image describes yet another equivalent definition of the Lebesgue integral of a nonnegative function:

where the integral on the right can be understood without any self-reference by taking it to be an improper Riemann integral. (Alternatively, one may understand it by separately defining the Lebesgue integral on the real line and then referring to that definition.) The point is that in a Riemann sum for this integral, a given point in the original domain is counted with a factor of $y_n$ if it is between $y_n$ and $y_{n+1}$, where the sequence $\{ y_n \}_{n=1}^N$ (with $y_N=\infty$) is a given partition of the range.

One choice of approximating simple functions clearly uses this 'picture'. Suppose $f≥0$ as usual. Then:

I have this silly graph I forced my computer to make,

I feel this picture is a little bit more representative of the procedure than your coloured bar chart because it is clear that the horizontal lines break up not only because there is a line above it, but also due to the rough geometry of the function itself.

Not the answer you're looking for? Browse other questions tagged lebesgue-integral lebesgue-measure riemann-integration or ask your own question.