Homology groups of a Pokeball

I tried to discover the singular homology groups of a simplex, but I found some dificulties and want to know if someone knows what I've got wrong. The simplex is the following (0-cells are in blue, 1-cells in red and 2-cells in yellow): 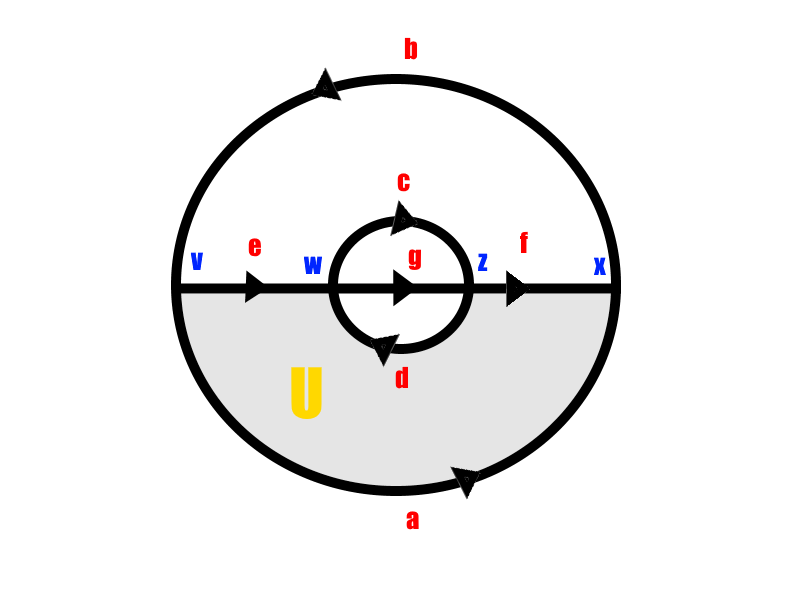 As it looks like a Pokeball, I called this space $PB$. First, I drew the following chain complex:

as there are one 2-cell, seven 1-cells and four 0-cells. After it, I concluded the following about the boundary operator $\partial_1$:

After it, I tried to analyse the boundary operator $\partial_2$. Here, however, I found some dificulties. First, how to even define $U$? Would it be equal to $[vwzx]$? I tried to calculate it as if $U=[vwzxv]$, which gave me:

which sounded somehow correct to me. However, after it, how could I even compute the kernel of $\partial_2$? Maybe I'm wrong in some definition or I'm using improper concepts. Boundary operators of 2-cells became a huge problem on many of my computations. Thank you for all your answers.

First of all, you have an error in your computation of $H_0$: The image of $\partial_1$ isn't all of $\mathbb Z^4$; it is only the elements where the sum of the coefficients is zero. Note that this is true of the image of every one-simplex, thus of the entire image. In general, $H_0$ contains a copy of $\mathbb Z$ for every path-connected component of the space. Here, thus $H_0(PB)\cong \mathbb Z$

To figure out the boundary of a $2$-cell, you just traverse the boundary clockwise*, and count how many times you cross each edge, plus one if the edge is oriented clockwise and minus one if it is oriented the other ways. So, in this case, you get $f-a+e-d$. (I think you might be confused on definitions here - it looks like maybe you're trying to treat PB as if it were a simplicial complex - which it is not unless you subdivide the square $U$ into two triangles. You need to treat it as a CW-complex if you include a square)

(*It doesn't really matter which way you go, if there are no $3$-cells; if there are cells of higher dimension, you just have to be consistent about how each cell is oriented)

You might also note that your space is homotopy equivalent to a wedge of three circles, since you can collapse the region $U$ onto the edges $e$ and $d$ and $f$ by a deformation retract. This geometric reasoning makes computing the homology groups way easier.

In general, the way you compute the boundary of an $n$-cell $A$ in a CW-complex $X$ is to consider that it's boundary is identified with $S^{n-1}$. For any $(n-1)$-cell $B$, we can consider a quotient map $q:X\rightarrow X/(X\setminus \operatorname{int}(B))$ - that is, the map collapsing everything outside of $Y$ to a point - which is also identified with $S^{n-1}$. Then, you get a map $S^{n-1}\rightarrow S^{n-1}$ by composing the inclusion of the boundary of $A$ into $X$ with the quotient $q$. The degree of this map tells you the coefficient of $B$ in $\partial_n(A)$. In two dimensions, this is basically the definition I gave earlier, but in higher dimensions, it clarifies what is meant by "orientation".

Not the answer you're looking for? Browse other questions tagged homology-cohomology or ask your own question.

4
Homology of hexagon
0
Do my relative Homology computations look correct?
6
Homology group in Hatcher
0
Bounding the number of cells of CW decomposition using known homology groups
2
Boundary operator of $n$-chain composed with itself is zero
0
Which ring in 2-chain is compatible with a compact 2d manifold?
3
Computing (Simplicial) Homology of 2 holed torus