In particular, I'm looking for conditions that formalize the idea that most bounds eventually hold when $B$ is sufficiently close to the points $A_i$ w.r.t the distance among the $A_i$'s. 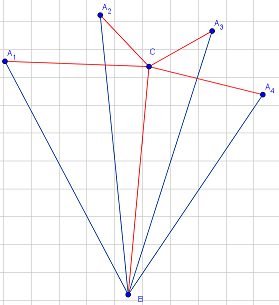 I would already be happy with conditions for the bound of $c=\frac{1}{2}$ for $n=3$ as a special case. I attempted to approach this case using the law of cosines, but I failed to distill any simple conditions from them. Additionally, I've experimentally seen that any bound can be satisfied as long as $B$ is 'close enough' to the $A_i$'s, w.r.t. the distance among the $A_i$'s, but I'm unable to formalize these conditions such that some inequality independent of $n$ holds.

Well, one pretty obvious sufficient condition is that $B=C$, that is,

Not the answer you're looking for? Browse other questions tagged geometry euclidean-geometry geometric-inequalities or ask your own question.

1
Is the "smallest" connected graph with $n+k$ edges a trivial generalization of the "smallest" connected graph with $n-1+k$ edges?
0
Modelling the difference between intersections of two lines on the circumference of a circle
3
How to work with triangle inequality using rational coordinates and squared distance?
1
Proving an inequality involving taxicab distances
2
Bounding the distance to the mean given the sum of squares distances
1
Formal theorems of ancient optimization problems (minimum distance from point to line; and maximum area of rectangle with a given perimeter)