So today I had a square paper with McDonalds coupons on it from which you had to cut out one coupon to use it. That got me wondering, how could I cut this square paper with coupons in least number of cuts by folding the paper over such that I cut every coupon out.

So here are the rules I made.

Assume there is a $NxN$ square made out of $1x1$ squares. What is the least number of cuts you have to make to cut every $1x1$ square "out" of the bigger $NxN$ square. You can fold the square in any way you like that is physically possible in the real world. 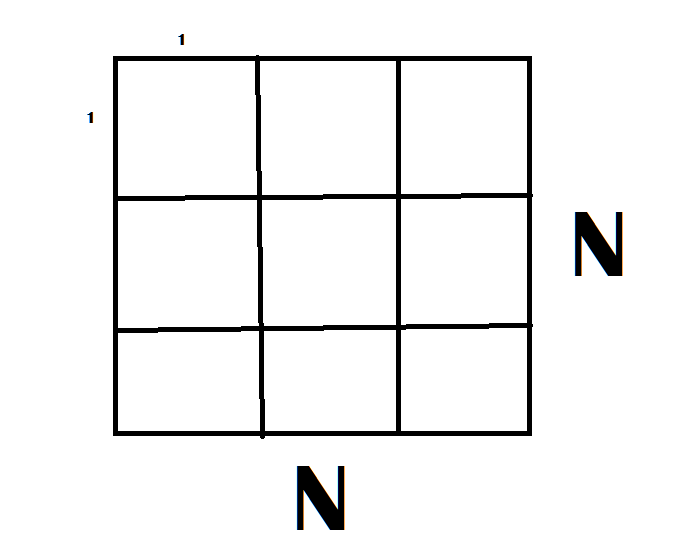 For clarity, in this picture the square paper is $3x3$ or $N=3$ and you want to cut out the 9 little squares out. If I wasn't clear enough, please ask me to clarify more.

So the real question is can we do it in one cut? We can! Make all of the horizontal and vertical accordion folds as above so that you have one horizontal and one vertical cut to make, as shown below in red. By making two diagonal folds, we can make those lines lie on top of each other and make them both with one cut.

Of course in reality the paper might get way too thick to make so many folds and cut through them, but at least in theory it is possible to cut out all of your coupons with a single cut. Note this doesn't even rely on your coupon page being $N \times N$. It could be $N \times M$ instead, and the coupons might have varying heights and widths, as long as all the cuts to be made are vertical and horizontal going across the entire page.

If you are allowed to fold the coupons, fold vertically concertina style so that all the vertical separations are lined up and then do the same horizontally for two cuts total.

With the example you have fold it in half vertically, which lines up the cut lines to separate the three columns of coupons.

Not the answer you're looking for? Browse other questions tagged puzzle applications or ask your own question.

17
Cutting a unit square into smaller squares
5
Spivak Chapter 2, problems 27 (and 28)
90
The Right Triangle Game
1
Math Competition Question Hong Kong 2
3
Mathematics of paper fold-cutting
1
Board game - winning strategy
8
Transforming a 8x8, 4x4 and 1x1 square into a 9x9 square
2
Nine squares puzzle : is it possible to move from any configuration to a winning one?
2
How to find the total number of auras possible for a tile of a given tier?