My gut feelings of what the solution may look like:

Some pictures I drew to wrap my head around the issue: 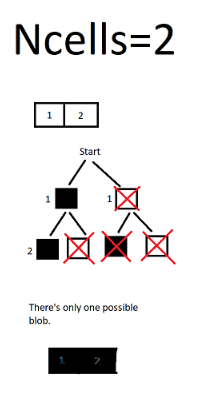 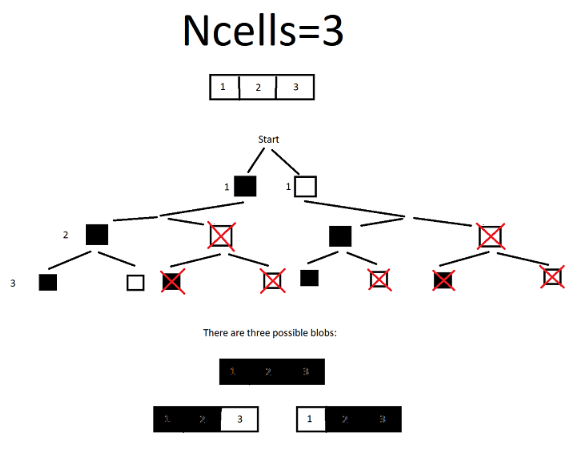 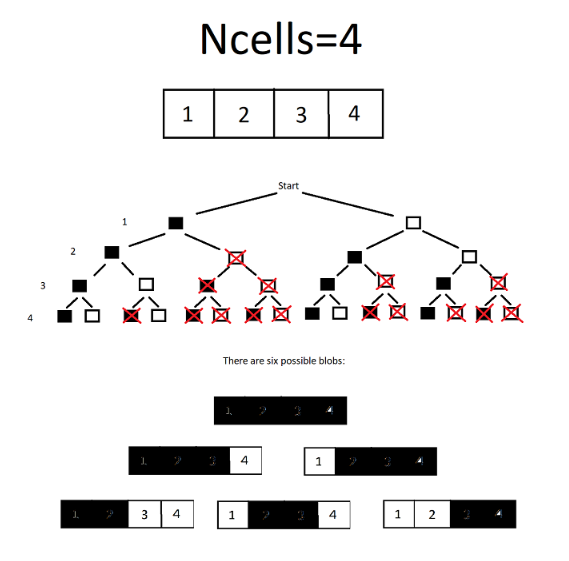 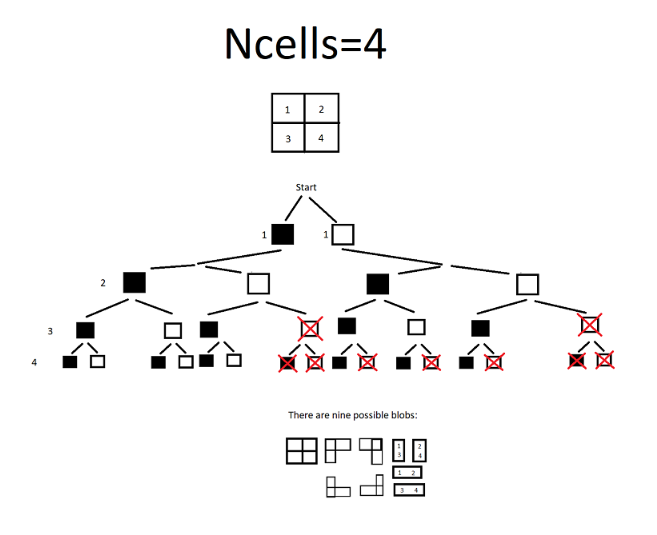 Some clarifications of Misha's answer:

Q: Why do you say "this method is definitely biased"?

A: Because we already know that the unbiased method works exactly the same way except you only accept the outcome of the random selection when the rules for a blob are applied "strictly" (i.e. you only have a blob when there's a single connected group of occupied spaces), and so if you instead just pick an occupied space and use its connected occupied spaces as the blob, you'll at the very least be biased towards smaller blobs.

Q: What do the vertical bars represent?

A: They represent size / cardinality. So $B$ is the blob itself, and $|B|$ is how many cells it contains.

A: In topology it refers to the boundary of a subset of a space.

Q: How did you figure out the probability for the biased method?

A: Well, $\frac{|B|}{100}$ is just the probability that you choose one of the cells of the blob, assuming it exists. So presumably the other part is the probability that it was created. To make it easier to understand, note that in the first formula you see that the odds of getting the strict blob you want (strict because you're not tolerating occupied cells not part of your blob) on any particular attempt is $2^{-100}$, because you need all 100 of those coin-flips to go exactly the way you want them. So in this less-strict situation, you need the coin-flips for your desired occupied spaces to go the way you want, and you also need the coin-flips for the unoccupied neighboring spaces to go the way you want, so that there's no chance you'll have a neighbor end up occupied and change the blob to a different one.

Q: How did you figure out the lower bound?

Q: If the goal of multiplying by the acceptance probability is to get rid of the $p(B)$ term, why use $p^*$ in the numerator? Why not use "1"?

A definitely correct but inefficient method is to

Step 1 is equally likely to generate each blob (as well as all the non-blobs), so the result (once a blob finally is generated) is equally likely to be any blob. More precisely, let $f$ be the probability that we get something that isn't a blob. Then the probability of generating your favorite blob $B$ on the $k^{\text{th}}$ trial is $f^{k-1} \cdot \frac{1}{2^{100}}$: we failed to get a blob $k-1$ times, and then finally got all the cells in $B$ and no others. So the overall probability of getting blob $B$ with this method is $\frac{2^{-100}}{1-f}$, which doesn't depend on $B$, and therefore all blobs are equally likely.

Unfortunately, it will probably take a very long time to generate a blob with this method, since a random subset of the cells usually doesn't form a connected blob.

Next, here is an actually feasible method.

First, consider the following sampling method, which is not uniform:

Now modify the method above to make the following method:

First, one method that immediately comes to mind is to randomly assigning all 100 cells to be occupied or non-occupied, and then just keep doing this until you get a pattern that is an actual blob.

Unfortunately, this will bias things towards blobs of a size proportional to the percentage with which you make the cells black or white. For example, if you turn a square black or white with a chance of $50$%, then of course, you'd get almost all blobs with a size of around $50$.

EDIT: Not true. By setting the percentage of turning a cell to black or white to $50$%, the likelihood of each specific blob being the outcome of this process is the same as for any other specific blob.

So, you really want to avoid that bias ... and note that the method described in the post has a very similar bias, in how the size of the resulting blobs very much depends on the percentage your algorithm uses.

So ... I think you'll have to do a more statistical method. So, for example, you could try to get some kind of estimation for how many blobs there are of various sizes by doing the following:

There's a "fast" algorithm for generating all blobs with equal probability, but it has a long startup time, and requires a lot of memory:

This isn't even slightly practical, of course, but I write it down to show that one cannot prove that there's no "fast" algorithm for blob generation.

Not the answer you're looking for? Browse other questions tagged probability combinatorics algorithms computational-mathematics or ask your own question.

74
What is the term for a factorial type operation, but with summation instead of products?

4
Grid-constrained probability question
0
Calculate Binomial Probability of number 75 out of total 100 rows and each row containing 3 random numbers
2
Choosing Balls Randomly
3
Given a grid populated randomly with a subset of numbers, what is the chance that at least one whole row or column contains exactly one unique number?
0
Find the probability that the balls will fall into neighboring cells