I'm having trouble understanding the definition of a universal arrow in Maclane's CWM. In particular, what are the fixed arguments?

I know at least the functor is fixed, but I can't tell if $c$ is also.

And, by the way, what good are universal arrows for? What do they tell us?

I shall use CWM's notation very closely. We will use an example "as simple as possible , but not any simpler", as Einstein used to say.

Let $\mathcal C$ and $\mathcal D$ be the following categories 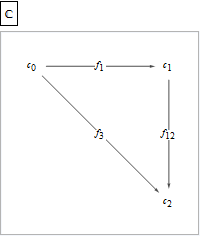 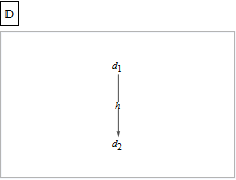 We can display the 2 categories side by side as CWM does. Note that the domain category $\mathcal D$ is on the right. More on this later. 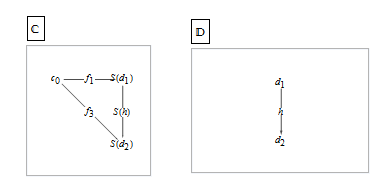 In CWM's definition of adjunction, you will see a diagram. CWM's $X$ is our $\mathcal C$, $A$ is our $\mathcal D$, $F$ is our $F$, and $G$ is our $S$. Now you see why CWM's and my diagrams above show $\mathcal D$ on the right side. That is because these $S$ functors are often/hopefully right adjoints.

You may also look at the definition of universal arrow as the initial object in the comma category of "objects S-under c". Modern terminology calls this a slice category. It is very simple in this case 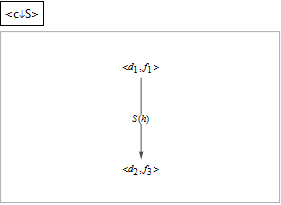 Now a medieval metaphor to "visualize" universal arrows: imagine the S-image is a castle. $c$ is a point outside the castle. If there is any way for you to go from $c$ outside to a point $S(d)$ inside, then surely you must go first to the main gate $S(r)$ via path $u$, then go to $S(d)$ via a unique path $S(f')$ inside the castle.

I don't have Cat for the Working Mat with me, but wiki has a good explanation about the definition of universal arrows.

As per why they are useful, they are useful because they allow us to discuss universal characterizations. These are arrow theoretic characterizations of objects in a category that specify them up to unique isomorphism. This idea is perhaps one of the most powerful notions in the entirety of category theory. We live in a very categorical, arrow-obsessed world. Most of the modern definitions of things involve and become simpler when we are able to phrase them entirely in terms of category theory. In fact, most proofs become trivial when viewed in this purely arrow-theoretically defined way.

Suppose that you have an abelian group $A$, a collection of abelian groups $B_n$, and $\displaystyle B=\prod_n B_n$. It is a theorem, probably known to you, that as groups

Now, if you defined $\displaystyle \prod_n B_n$ to be "the set of all tuples..." then this is non-obvious. But, one could have used the following universal characterization of a product:

You can quickly check that our usual definition of $X=\displaystyle \prod_n X_n$ along with the canonical projection maps $\text{proj}_n:X\to X_n$ satisfy these definitions. Then, this theorem really just becomes a tautological restatement of the definition of a product!

Yes, you may argue that I have pulled the old French trick of turning a theorem into a definition, but let me give you another example.

I assume you are aware of the tensor product $M\otimes_R N$ of two $R$-modules ($R$ is commutative and unital for convenience sake). I doubt that you could find any modern user of mathematics that would tell you that the tensor product is not an indispensable tool.

This horribly mentioned construction then becomes necessary to mention, only once!, so that we know tensor products always exist. You see, the operative part about a tensor product's definition is that they allow you to trade in bilinear maps for linear maps--they turn multilinear algebra into linear algebra.

So, in the extremely important example of tensor products, one sees that universal constructions aren't just a convenient rephrasing of a definition but the only sensible one

Not the answer you're looking for? Browse other questions tagged category-theory self-learning or ask your own question.

3
Universal properties (again)
6
Large categories? How is a set of objects/arrows not a set?
1
Adjunctions via Universal Arrows: Understanding a Proof.
8
Identify the universal property of kernels
2
Understanding a Fact About Universal Arrows from Comma Categories
0
Find generators for the ideal of relations between the generating arrows of $\mathbb{Z}[\Delta]$
1
Contravariant Functor as covariant $F: C^{op} \rightarrow D$
1
Correct Definition of a Universal 2-Arrow In a 2-Category?
22
Purely categorical definition of Hausdorff space