Axes of rotation in 4D

Sorry for my lack of 4D imagination. I would appreciate your help with pointing out what the correct way of thinking is regarding rotations in 4D.

So none of the suggestions 1-3 hold: there are two orthogonal planes, each rotating independently, and causing the volume of vectors in between them to rotate with them. The projections of a body onto the planes rotate with the planes.

Add: A rotating 3-D sphere does have an axis, and there is only one way to extend the rotation to 4-D, namely by fixing the fourth dimension; this is the case $\phi=0$ in the above matrix.

If you are rotating with the sphere and look up at the sky, and you have 4-D vision, then the sky would not look like a dome but a volume (a 3-sphere). There would be a whole plane (appearing like a great circle) of fixed 'polar' stars, and all other stars rotate about this plane along with the 'equator'.

If you find it hard to imagine stars rotating about a plane, think of the flatman A. Square: all his stars rotate about his circular Earth and it might be inconceivable for him to imagine a fixed polar star.

Add2: Represent the 3-sphere using three angles $(\theta,\phi,\psi)$. Here is a plot of three random stars as they move in this space: 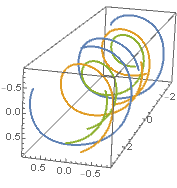 In general they are seen as moving in a direction (the one you would have moved if you weren't stationary) but rotating about that direction. The two rotations could of course have different rates.

Not the answer you're looking for? Browse other questions tagged rotations or ask your own question.

6
Aren't asteroids contradicting Euler's rotation theorem?
3
How can I break down a rotation of known amount around a known axis into two rotations of unknown amounts around known axes?
3
Nullify (zero out, cancel) rotation in an arbitrary axis in a Quaternion
2
Sphere rotating in several directions simultaneously?
3
Euler Angles - Gimbal lock, why non-orthogonal axes?
2
Composition of rotations around nonintersecting axes
1
Composition of plane rotations around different axes