What are "sets that don't contain itself" in Russell's paradox?

What are "sets that don't contain itself" in Russell's paradox?

Since I think that for a set having to contain itself is intuitive and if a set doesn't contain itself, then the cardinality ought to be less than.

However, I don't understand how sets of different sizes could even be considered to be equal? Thus, isn't a set that doesn't contain itself an impossibility?

The issue here is the interpretation of the verb "contain". "Contain" here means contain as an element, not as a subset. By this interpretation, almost no natural sets one would think of contain themselves, and thus it's far from an impossibility. For instance, the empty set does not contain itself. It doesn't contain anything. Also the set $\{3\}$ does not contain itself. Its only element is $3.$ $\{3\}$ is not an element of it.

Note: In the Russell paradox containing does not mean that a set is a subset of itself. The set contains itself as an element (and not as a subset.) Having this is mind let's step forward.

To consider infinite sets the problem is a little more complicated but is essentially similar.

As far as a set containing itself as an element: 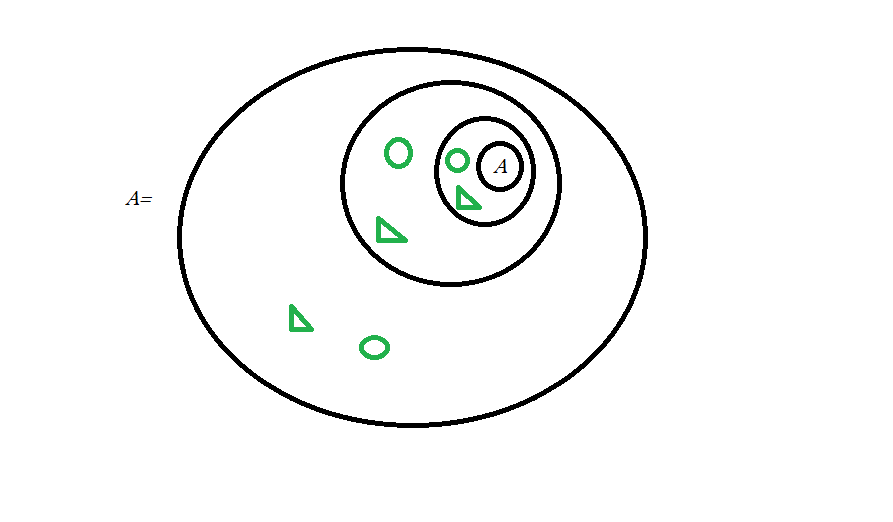 The problem is not that with $A$... You can sense the problem if you try to depict $A$ like I did and stopped at the $3^d$ level.

Not the answer you're looking for? Browse other questions tagged paradoxes or ask your own question.