Intuitive definitions of the Orbit and the Stabilizer

I don't fully understand the definition of an Orbit. Mathematically, it is given by

where $G$ is a group and $x \in X$, a set that is acted upon by the group $G$, but what does this actually mean? Is it the set of all elements $x$ after having been acted upon by some element $g$?

The orbit of $x$ is "everything that can be reached from $x$ by an action of something in $G$."

Those already seem pretty intuitive... what else can be said?

I guess you might want to look at orbits and stabilizers for particular actions. For example, if a group is acting on itself by conjugation, then the orbit of an element is that element's conjugacy class. One element stabilizes another in this action exactly when they commute.

Some examples may illuminate these definitions.

Here's an example with more interesting stabilizers. Let $G$ now be the dihedral group of order 8, 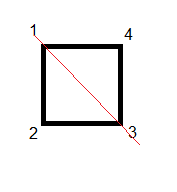 with $\rho$ acting by rotation counterclockwise by $\frac \pi 4$ radians and $\tau$ acting by reflection through the red line. In this way, the elements of $G$ consist of four rotations (through $0, \frac\pi 4, \frac\pi 2$, and $\frac{3\pi} 4$ radians) and four reflections (horizontally, vertically and through each of the two diagonals). Note that each vertex can be sent to any other given vertex by an appropriate rotation, and so the orbit of each vertex is $\{1,2,3,4\}$. What is the stabilizer of, say, $3$? None of the nontrivial rotations fix $3$, and the only reflection that fixes $3$ is $\tau$, and so the stabilizer of $3$ is $\{e,\tau\}$.

A bit about group actions:

In algebra and geometry, a group action is a description of symmetries of objects using groups. The essential elements of the object are described by a set, and the symmetries of the object are described by the symmetry group of this set, which consists of bijective transformations of the set. In this case, the group is also called a permutation group (especially if the set is finite or not a vector space) or transformation group (especially if the set is a vector space and the group acts like linear transformations of the set).

A group action is an extension to the definition of a symmetry group in which every element of the group "acts" like a bijective transformation (or "symmetry") of some set, without being identified with that transformation. This allows for a more comprehensive description of the symmetries of an object, such as a polyhedron, by allowing the same group to act on several different sets of features, such as the set of vertices, the set of edges and the set of faces of the polyhedron.

If $G$ is a group and $X$ is a set then a group action may be defined as a group homomorphism $h$ from $G$ to the symmetric group of $X$. The action assigns a permutation of $X$ to each element of the group in such a way that the permutation of X assigned to the identity element of $G$ is the identity (do-nothing) transformation of $X$; a product gh of two elements of $G$ is the composition of the permutations assigned to $g$ and $h$.

The defining properties of a group guarantee that the set of orbits of (points x in) $X$ under the action of $G$ form a partition of X. The associated equivalence relation is defined by saying $x \sim y$ if and only if there exists a $g \in G$ with $gx = y.$ The orbits are then the equivalence classes under this relation; two elements $x$ and $y$ are equivalent if and only if their orbits are the same; i.e., $Gx = Gy$.

If you have the spare time, you might find this You Tube video, Orbits of group action helpful.

$G_x$ is a subgroup of $G$, though typically not a normal one.

Also, Wikipedia discusses orbits and stabilizers and how they relate, in its "Group Action" entry.

See also Gowers's follow-up blog entry for a "down to earth" discussion on group actions, orbits, and stabilizers:

Consider a sphere $S \subset \mathbb{R^3}$ and a group $G$ of (all) rotations along the OZ axis (north-south pole, as Earth). 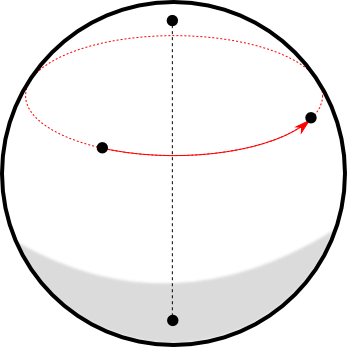 Stabilizers are subgroups that won't disturb your points. In our sphere example, we have two kind of points: poles and non-poles. Does any rotation moves a pole? No, so $G_{\text{pole}} = G$. However, every other point would be disturbed by any non-zero rotation, hence the stabilizer of a non-pole point is a trivial group, $G_{\text{non-pole}} = \{1\}$.

In conclusion: stabilizer of $x$ is the biggest subgroup that won't disturb your $x$.

I hope it explained something ;-)

If you think of an action of a group $G$ on a set $X$ as a assigning to each $g \in G$ a mapping of $X$ to itself, that is to say for each $g \in G$ we have a function $g: X \rightarrow X$ then the orbits and stabilisers take on an intuitive meaning.

The orbit of $x\in X$, $Orb(x)$ is the subset of $X$ obtained by taking a given $x$, and acting on it by each element of $G$. It is not the set of all elements $x$ after being acted on by some element $g$, that would be the image of $g$ when considered as a mapping, written $Im(g)$ or $g(X)$. It is different for each $x$, and can be thought of as the set of all points that you could possibly send $x$ to if you are allowed to act on $x$ by any element of $G$.

Considering an element $ p \in X$ , those group elements which preserve $p$ through the group action are the stabilizers of $p$. This is what is shown in the left picture. Note that stabilizer is a subset of the group set.

On the right, we have the orbit of the same point $p \in X$. These are all the points which $p$ can be shot into other than itself in $X$ by the action of the group elements. Note that orbit is a subset of the set X.

A few points to 'develop' interest

*:(...with some reasonable conditions on how the group acts on X)

Ok so a group action on a set is basically a way of assigning for each element of the group a way to "mix up" the elements of the set.

For example when you take the group to be symmetries of a shape and the set to be "corners" of the shape then after performing each symmetry you jumble up the corners (and this is done in a consistent way).

The stabilizer of a specific thing in the set are the elements of the group that fix that object under the corresponding "mixing up".

The orbit of something in the set are the possible things the group "mixes it up" to.

Not the answer you're looking for? Browse other questions tagged abstract-algebra group-theory group-actions or ask your own question.