When does a space admit a flat metric?

Once upon a time I was told that the torus is flat. This was supposed to be surprising, since the ordinary picture of a torus we have in our heads looks inherently curved. However, thinking instead of a torus as a square in the plane with opposite points identified, it becomes 'clear' that the torus at least admits a flat metric, because the plane admits a flat metric.

However, a two-holed torus can also be obtained in this way: it is an octagon in the plane with appropriate pairs of edges identified. However, by the Gauss-Bonnet theorem, this surface does not admit a flat metric.

Thus, something about the way we make the identifications for the 1-torus is compatible with the flat metric structure on the plane, and this is not so for the 2-torus. I am hence lead to ask:

Given a smooth manifold $M$ obtained from $\mathbb{R}^n$ by appropriate identifications, is there some general criterion for determining whether the flat metric on $\mathbb{R}^n$ descends to $M$? Or is the $n$-dimensional torus particularly special in its ability to inherit a metric from the plane? If so, what is special about it?

The octagon with edges identified appears to be different because you cannot tile the entire flat (Euclidean) plane with octagons in such a way that everything is OK when you cross the "border" and move to the adjacent octagon.

If $(M, g)$ is flat, and $g$ is complete, then its universal cover is isometric to $\mathbb{R}^n$ with its standard metric, so every complete flat manifold is a quotient of $\mathbb{R}^n$ with its standard metric by a discrete group of isometries which acts freely; note, every discrete group of isometries of $\mathbb{R}^n$ acts properly discontinuously. If in addition $M$ is compact, then the group action is cocompact; a discrete group of isometries which acts cocompactly is called a crystallographic group, if it also acts freely, it is called a Bieberbach group; note, a Bieberbach group can equivalently be defined as a torsion-free crystallographic group (this is the usual definition). Bieberbach showed that an $n$-dimensional crystallographic group has a finite index subgroup isomorphic to $\mathbb{Z}^n$, from which it follows that every compact flat manifold is finitely covered by a torus.

You can use this idea to put a flat metric (in a sense) on any surface obtained by identifying the edges of a polygon in pairs. But the metric won't be smooth unless whenever you have a set of vertices being identified, the angles at those vertices add up to exactly $360^\circ$. It works for the square because you have four $90^\circ$ angles meeting at a point. To see what goes wrong, cut a regular octagon out of a piece of paper, then tear off eight pieces containing the eight vertices and try to tape them all together so that all the vertices meet at a point. You can do it, but you'll get a shape that can't be flattened out without a lot of creasing.

Here's an example of a hexagon that works: 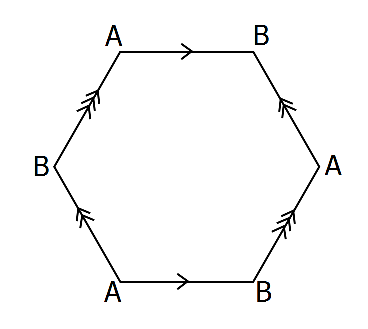 The vertices labeled A are all identified with each other, as are the vertices labeled B. Since the angles all measure $120^\circ$, each set of three angles fits together to make a smooth flat surface. (The resulting surface is homeomorphic to the torus, as it must be because it has a flat metric. It's an interesting exercise to prove this directly by cutting and pasting.)

The reason you can put a smooth hyperbolic metric on a surface of genus $n=2$ or more is that as long as $n\ge 2$, it's possible to find a regular $4n$-sided geodesic polygon in the hyperbolic plane whose angles are all exactly $360^\circ/4n$, so they all fit together to make a smooth surface with a hyperbolic metric.

If the manifold is closed, it is finitely covered by the $n$-flat torus.

Not the answer you're looking for? Browse other questions tagged differential-geometry differential-topology riemannian-geometry surfaces or ask your own question.

3
Do all parallelizable manifolds admit a flat metric?
3
Isometric embedding of Riemannian manifolds into Minkowski space
4
Why does the Gauss-Bonnet theorem seem to work for some square boundary identifications but not others?
6
Codimension one foliations induced by a map to the circle.
8
Does every manifold admit a *flat* Riemannian metric?
2
Does every manifold with boundary admit a flat metric?