I am working through Paul Lockhart's Measurements. It's one of the most engaging and insightful introductions to elementary mathematics I've read. In the opening pages, he presents a simple challenge: Prove that the three medians of a triangle intersect at a point (screenshot below). He doesn't provide any answers, which I think is the whole point of the book. I've come up with an argument, but I'm not sure if it holds water. Can you please review this proof, or point out the flaw in it? Thanks!

I spent some time thinking about why exactly the three corners would trace the median, and not some other line. The reason (I think) lies in the side opposite to the corner. As that side contracts, both ends of the side uniformly reduce in size but the midpoint of that side still lies on the median.

Well, since you've asked for criticism, here some is! (Both positive and negative).

Firstly, nice try. It seems you've got something of the right idea. Intuitively it does indeed seem that if you do as you say and "contract" the triangle down to a point, the corners trace the medians, and eventually meet at a single point, or something like that.

Now time for the bad news; unfortunately, intuition does not a mathematical proof make. The problem with your proof is that you don't actually define anything that you've said. What does it mean to "Slowly scale (contract) the triangle down to a point."? Intuitively we do understand, but mathematically, we do not.

You follow this up by asserting something about the corners tracing the three medians of the triangle. This is unfortunately tantamount to stating what you're trying to prove - and is a no no!

I won't provide you with a proof, that would ruin all your fun, but the main thing is to ask yourself "If I say this to somebody, do they have any other choice than to agree with me?". The answer to that question, for a proper proof, is no. You can not disagree with a proof. However, in your example above, almost anyone could, because it's not quite watertight enough. Hope this helps :-)

I think you had a valid intuition, and that is important, but the precise details needed some work. I hope my version helps.

Please don't take this harshly -- I think it's a very nice idea. But others have not been honest enough: the idea of this proof is not correct. I think it cleverly hides this, and seems to be possibly correct, but if you try to write down the details, you will not get anywhere with it.

The main problem is that you say to "Slowly scale (contract) the triangle down to a point." But what point? Scaling a triangle requires that you pick a point to scale it down to, and move the vertices towards that point at a uniform rate.

The only reasonable answer to "what point" is "scale it down to the centroid of the triangle." But then, the proof is circular: in order to give the scaling argument, you already have to know that the three lines all go through the centroid.

Q: Can't I just say to scale down the figure, and not specify what point I'm scaling it down to?

You could, but then it would not be clear what it means for the three corners of the triangle to "trace out" lines during this scaling. In order for them to trace out lines, they must move towards a specified point.

Q: OK. Then can I just pick an arbitrary point to scale it down to?

Q: What if I define the centroid first (say, the average of the three vertices' coordinates), and then scale down to that point?

This will work, but the next step (after defining the centroid) will be to prove that all three medians go through the centroid. And once you have proven that, the scaling argument becomes unnecessary, because you already know that the three medians intersect in a point. The proof is already done.

Q: How could I have seen, before going into this detail, that this proof would not work?

The best "heuristic" reason is that it is not clear, from reading the proof, what facts it uses about the median lines. It seems like the proof could be understood by someone who does not even know what a "median" is. Thus, the proof must be wrong.

In a rigorous way, you may prove that

By describing axis, heights and angle bisectors as loci you may easily devise similar proofs for the existence and unicity of the circumcenter, orthocenter and incenter. Here it is an extended implementation of this trick:

Here $[PQR]$ stands for the area of $PQR$ and $d$ for the Euclidean distance, of course.

You hit the nail on the head: in your proof attempt, it is difficult to justify why the lines that you have drawn are the medians.

So all the arguments that you have made work for every point $P$ inside the triangle; you are not using any property which is specific of the medians. And you are just proving that the the segments $PA, PB, PC$ intersect in $P$ (which is obvious), but nothing there says that those lines are the medians (and indeed for general $P$ they won't).

Note that you can't get out of this by saying "I take $P=G$, then these are the medians", because the existence of $G$ is what you are trying to prove.

So you need to bring into the picture an additional property of the medians, otherwise your argument is not going to work.

You are using the conclusion in your demonstration: you assume that the three lines meet at one point (when you "contract the triangle in a single point"). To see what I mean, imagine that the medians intersection forms a triangle instead of one point: 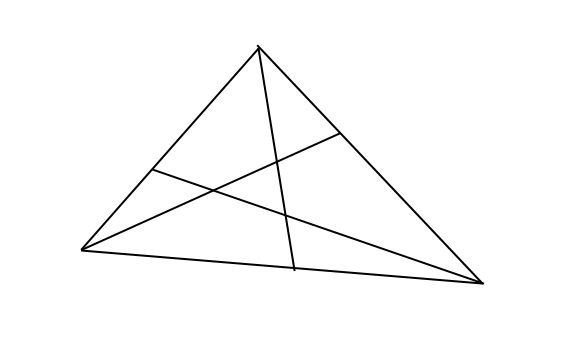 Then your argument won't work. You would have to prove first that two of the medians meet and that the third one meets in exactly same point.

I am surprised that nobody gave the following counter to your proof:

If you consider all three such lines, clearly they do not intersect into the same point. However, if you slowly contract the triangle as you suggested, then they eventually do meet!

Therefore, your proof will work for invalid assumptions as well.

In conclusion, the fact that the triangle scales down to a point is a consequence of your construction independent of the point you choose to scale it down. And the vertices will always follow the lines that are concurrent to the center of the scaling transformation.

Not the answer you're looking for? Browse other questions tagged geometry proof-verification triangles or ask your own question.

2
Geometry/ Similar Triangles Problem
4
Proving that the medians of a triangle are concurrent
0
medians in a triangle
1
Median of triangle
1
How to find equations of triangle sides, given equations of two medians and one point of triangle?
4
How to divide a spherical triangle into three equal-area spherical triangles?
3
“Physical” proof that the medians are concurrent
1
Three sides of a regular triangle is bicolored, are there three points with the same color forming a rectangular triangle?
4
Medians of ABC, when extended, intersect its circumcircle in points L,M,N. Prove that if $LM=LN$ then $LM=BC$
1
How to find the remaining area of equilateral triangle if 3 circle sectors of radius R1, R2, R3 are given.