How can I introduce complex numbers to precalculus students?

I teach a precalculus course almost every semester, and over these semesters I've found various things that work quite well. For example, when talking about polynomials and rational functions, in particular "zeroes" and "vertical asymptotes", I introduce them as the same thing, only the asymptotes are "points at infinity". This (projective plane) model helps the students in understanding what multiplicity of a zero/asymptote really means. I later use the same projective plane model to show how all conic sections (circle, ellipse, parabola, hyperbola, lines) are related. I get very nice feedback on this, and the students seem to really enjoy it.

I have not, however, been able to find similar motivating examples for introducing complex numbers. I know there must be similar (pictorial!) arguments to engage the students and pique their curiosity, but I haven't found it yet. Simply saying "all polynomials have a zero over the complex numbers" doesn't really do it for them (again, the more pictures involved, the better).

Are there "neat" and "cool" ways of talking about complex numbers for the first time, that are understandable by beginning precalculus students, but also interesting enough to capture their attention and provoke thought?

Edan Maor provides an answer on this post, which gives a nice explanation:

A way to solve polynomials

Finally, we asked, "wait, what about $x^2 = -1$?" This is the only question that was left, so we decided to invent the complex numbers, in particular "imaginary" numbers, to solve it. All the other numbers, at some point, didn't exist and didn't seem "real", but now they're fine. Now that we have complex numbers, we can solve every polynomial, so it makes sense that that's the last place to stop.

This explanation goes the route of redefinition. Tell the listener to forget everything he knows about imaginary numbers. You're defining a new number system, only now there are always pairs of numbers. Why? For fun. Then go through explaining how addition/multiplication work. Try and find a good "realistic" use of pairs of numbers (many exist).

Explain the history of the imaginary numbers. Showing that mathematicians also fought against them for a long time helps people understand the mathematical process, i.e., that it's all definitions in the end.

I'm a little rusty, but I think there were certain equations that kept having parts of them which used $\sqrt{-1}$, and the mathematicians kept throwing out the equations since there is no such thing.

Then, one mathematician decided to just "roll with it", and kept working, and found out that all those square roots cancelled each other out.

Amazingly, the answer that was left was the correct answer (he was working on finding roots of polynomials, I think). Which lead him to think that there was a valid reason to use $\sqrt{-1}$, even if it took a long time to understand it.

Another idea comes from Byron Schmuland answer on this Math Overflow thread:

Use complex numbers to explain Ptolemy's Theorem. For a cyclic quadrilateral with vertices $A,B,C,D$ we have $$|AC|\cdot|BD| = |AB|\cdot|CD|+|BC|\cdot|AD|$$

I really liked the explanation given by the site BetterExplained. Basically, you think of multiplication of real numbers as a geometric transformation.

Thinking about multiplication this way, if you start with $1$ and multiply twice by $-1$, you reflect twice and therefore you get back to where you started. This makes sense, since $(-1)^2 = 1$. Now, is there an operation that, applied twice to $1$, gives $-1$? It's clear that no real number will do. But what if you escape the real line for a bit and rotate $1$ twice by $90^\circ$? You get $-1$. So now it turns out that the reflections that negative numbers were responsible for were just rotations by $180^\circ$, but we couldn't tell because we were restricted to just a line.

The last step is realizing that now we have the whole plane to work with. We can use what we know about vectors and say that any arrow starting at $0$ and ending somewhere in the plane can be represented as a linear combination of $1$ and $i$.

Thinking this way, De Moivre's formula becomes a definition, which makes it clear what complex number multiplication really is (absolute values are multiplied while angles are added), because that's how we started! We wanted $i$ to represent a rotation by $90^\circ$, not some abstract solution of $x^2 = -1$.

I have taught complex numbers several times and I do agree with you that it can be hard to motivate. While I agree that pictures often can be helpful in motivating and understanding a problems, I also don't think that one has to be afraid of staying abstract.

Obviously this way of introducing complex numbers will take some time and there is some "hard" algebra involved, but usually I get the feeling that it does get the point across. I like the method because the final example is easy to understand. You can get the calculator involved (or you can do the algebra if you would like) in the last step where you find the value of $x$. There is some history also. Just the basic sub-problem of finding two numbers is $4$ and whose product is $125$ can be interesting in itself.

You want something neat and visual? Try showing solutions to $x^5=3$ on the complex plane:

Not a very mathematical answer (sorry), but if you're looking for something visually interesting to introduce complex numbers, M. C. Escher has got you covered. I won't try to explain it, because I'll do a bad job. I'll let the real mathematicians do that:

Here's a visual way to explain multiplication of complex numbers:

The document appears to be still at the following URL:

I would say this is a good motivation, though without advanced knowledge it seems artificial.

Unfortunately all the "cool" stuff connected with complex numbers is probably over the students' heads right now.

It's nice that you can find the roots of any polynomial and all, but all the "real action" is elsewhere.

Here is something that may be easy to explain. Because complex numbers are two-dimensional, a function with a complex domain and range has a geometric interpretation: it maps some two-dimensional space to another. So it can represent a geometric mapping, which morphs one space to another. That has not only obvious applications in computer-based visualization, but in problem solving: e.g. translating some problem with boundaries that are some oddly-shaped space into one over a rectangle.

Here is another. Because complex numbers are two dimensional, a complex-valued function can map each point in a two-dimensional space to a vector. In other words, complex functions can represent 2D fields. Properties of field, such as "fluxless" and "irrotational" can be connected to certain properties of the underlying functions which are nicely expressed using complex numbers.

While targeted at web developers, this presentation is mostly about how to present abstract maths in an easy way for students to understand.

Links to the tools he uses to create the animated graphs and the slides itself are included in the video.

Thought it was pretty cool.

This is like Javier and Izkata's answers combined. Go to this site that plots complex function graphs and type in $$f(z)=z^2+1$$ then look at the top view. You will see the solutions are not along the horizontal center line. You could produce several of these graphs and ask students in groups to find out how they relate to the roots of the function. 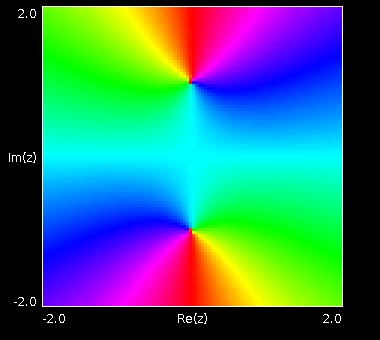 i know i am going to get a lot flack for this but why would take time off in pre cal to introduce complex numbers? the whole point of pre cal is to prepare the students for a two semester long calculus sequence. you hardly use any complex numbers at all in the two semesters of calculus. is not the time better spent getting them ready to do well in calculus.

$x^2+1=0$ has complex roots. LHS only eq. $0$ if $x$ is complex. So now mathematicians consider complex plane for $X$. This leads to fundamental theorem of algebra.

Similar to Thomas's answer, there are problems that can be solved without complex numbers, but if you solve for $x$ it is complex.

(You can see $x$ is actually complex here, and WolframAlpha also shows the solution here, but I've forgotten the non-complex working :-( )

One. Use Euler's formula for conversions between polar and rectangular coordinates in 2 dimentions. You can also use it for rotations. This method needs less handwriting and thiking than using sin, Cos, and tan. Notation is more compact.

$t$ is angle in radians. This goes with the vector approach. Multiply above equation by $R$ and then you get $(R,t)$ are polar coordinates on the left side. Then on the RHS the real and imaginary parts are the rectangular coordinates.

A rotation is evident by multiplying by e^(if) or adding if in the exponent, where f is the rotation angle, phi, in radians. (2π is the full distance around a circle of radius 1.)

Google or hit the library. It might even be in your book.

Modern scientific calculators and math software handle complex numbers seamlessly. This makes use even easier. Ie if you entered sqare root of -1 it would give you 0+i or (0,1) in complex retangular coordinares. Trig, exponentioal, and log functions for sure. You can ask your class to test their calculators to find the good ones.

This shows relations between e, trig fuctions, ln, pathagorean therom, and π. Trig functions can be derived from the equation. Taylor series expansions of the equation also work.

Note all functions above work with complex inputs and can provide complex outputs.

This kind of thing is used to describe rotating machine parts and oscilations.

I also teach precalculus, and I think it depends on the skill level of the students and how much time you have.

If it’s just something you want them to be able to work with and then move on from, it’s sufficient to treat the subject mechanically. But if you want something cool, here’s how I introduce it to my more advanced precalc class:

They already know the quadratic formula. In the renaissance, a cubic forumula was discovered. It’s intuitive that any cubic will have at least one real root, because the range is all real numbers. However, when you evaluate the cubic formula, sometimes you get a square root of -1 in an intermediate step. If you just keep working the problem through and don’t panic eventually it will cancel out, but you have to go through the complex plane to find your real root sometimes. This was the historical motivation for first working with imaginary numbers. It’s a very concrete, tangible way to introduce the subject. You can set up or find some mostly simplified cubics where they’ll have to intuitively start working with complex numbers. And the history is very colorful, including dueling mathematicians encoding the cubic formula in poetry, stealing formulas, etc.

1
What is the best way to introduce for students the new mathematical definition : ‎$i^2=-1 ‎$?
495
Do complex numbers really exist?
497
What are imaginary numbers?
6
Comparing real and complex numbers
4
Explain complex numbers
2
Motivating complex structure on $\mathbb{R}^2$
0
What exactly is the complex plane, and how is it useful?

9
I want to study mathematics ahead of high school, but I found that I'm rusty on the elementary stuff
30
I'm teaching a college geometry course. What should I cover?
2
Turning an ellipse into a parabola
0
Precalculus - Complex numbers/Roots of Unity/Exponential Form
17
High school algebra textbooks for gifted students
1
Discrete Math Textbook Request
0
Sketching a complex function $f(\Omega) = \{ f(z) : z \in \Omega\}$