My attempt: I was googling it, but I didn't find the correct answer, as I didn't understand the explanation why a circle is not a convex set as defined here: 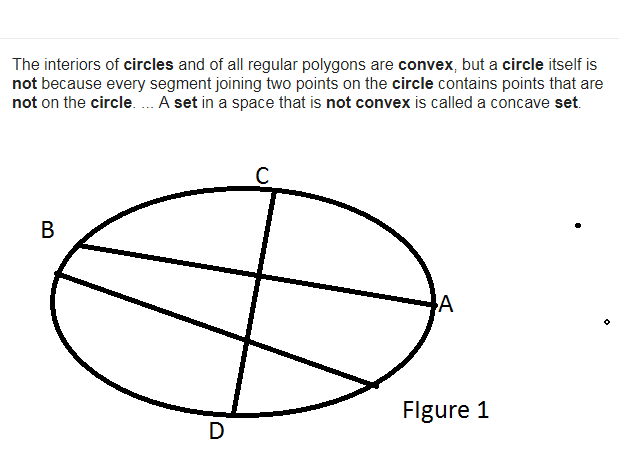 As shown in diagram 1, points A and B and points C and D lie inside the circle, thus I think the circle must be a convex set, as clearly shown in figure 1.

Why isn't the circle a convex set?

They mean just the edge of the circle, without the interior. That is not a convex set.

On the other hand, if a circle is defined as the set of points in the boundary plus those on the interior, it is a convex set.

The sentence in your book is misleading since it did not define what a circle is, and it seems to be using both interchangeably, adding more confusion.

The circle is given by the black curved line. Note that the white interior is not part of the circle.

This is a confusion caused by people using language differently. When doing mathematics, we must be quite precise in assigning meanings to different terms, which is why we take so much trouble to define them. And the point of a definition is, once we've understood what somebody means by a term, we won't make the mistake of thinking they mean something else!

So here's how we use certain common English words in ordinary ("Euclidean") geometry:

Note that a disk does not necessarily include the circle itself! (When studying topology - which is rather like geometry would be if distances weren't fixed or important - we distinguish between a closed disk, which includes the boundary or outside edge, and an open disk, which doesn't. And we often call a disk a ball - think of a squishy rubber ball.)

We also define a convex set to be one that includes every point that lies on a line segment joining any two of its points. So you can see that the inside (or interior) of a disk is a convex set, since even in a squishy rubber ball, any one point that lies between two others of the interior must be in the interior, no matter how much we squish it. But the outside (or boundary) of a disk is not a convex set, since there are points between any two points on the circle that don't also lie on the boundary, that is, they lie inside the circle, in the interior of the open disk. For example, as pointed out in the answer by celtschk, the intersection of those two chords AB and CD in your diagram is such an interior point that lies between points of the circle.

(*) Now I haven't defined what I mean by point, inside or a line segment. But in the case of a circle in Euclidean geometry, the ordinary notion of "inside" and "outside" works well enough; a point is as small a dot as we can possibly draw in a picture; and a line segment is that part of a straight line that connects two points. More generally, we can't define everything! Even in mathematics, where we try to be as precise as we can, we sometimes have to say "Enough!" and just accept certain ideas as basic, undefinable notions. We usually take a geometric point as one of those basic notions.

Because the chord is not placed on the circle.

Not the answer you're looking for? Browse other questions tagged geometry convex-analysis or ask your own question.

-2
Is the numerical range of Identity operator convex?

5
What is the relation between convex metric spaces and convex sets?
2
Why doesn't the definition of the interior of a set depend on the dimension of the set
5
Integral of an increasing function is convex?
5
Convex Set with Empty Interior Lies in an Affine Set
3
why are convex functions defined as functions who's epigraph is a convex set?
0
Is this set always convex?
0
Inscribed circle in general case