What is the original source of “fiber” in mathematics?

Maybe this question is not relevant to mathematics, but I am very curious. I am studying Abstract Algebra these days.

And the definition of normal fiber in Wikipedia states:

Fiber or fibre (from the Latin fibra) is a natural or synthetic substance that is significantly longer than it is wide. Fibers are often used in the manufacture of other materials.

Does fiber in mathematics have any relationship with the normal defintion? Or are they somewhat alike? Why do they define the inverse image with fibre?

Can anyone help me out?

My guess would be that it came from a geometric picture like the following one (picture taken from Wikipedia): 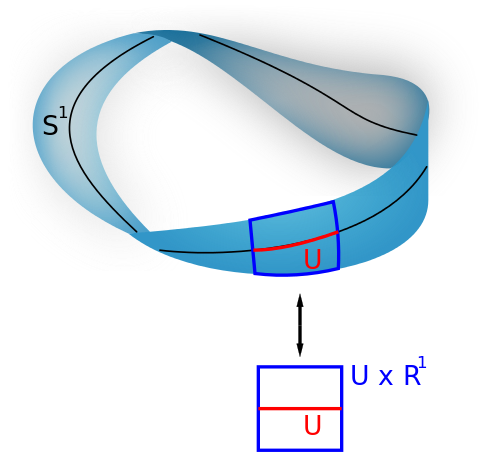 What you're looking at is an example of a vector bundle (specifically, a line bundle) which is a particular type of fiber bundle. The idea is that if we let $M$ be the Mobius strip and $S^1$ the black line (really a circle) pictured, then there is a map $M\to S^1$ by projecting down vertically onto $S^1$.

The fiber over a point $P$ of $S^1$, say we take $P$ lying on the portion highlighted red, is then just the vertical line on $M$ running perpendicular to the red line, crossing through $P$. In this sense it is some "thin strand" lying over our point, which intuitively seems to match the definition of "fiber" you quoted.

I would guess that fiber really comes from the geometric/topological definition of a fiber bundle which has been transported into algebraic language.

In particular, used in the sense that it is a "thread" or "string" to build larger things out of (fiber of a textile, or fiber muscle.)

So the equivalence classes $[x]:=x+ \ker\phi$ are thought of as being your space built up from the "thinner" pieces that can be identified with preimages of $y \in Y$.

If you care for a more general approach (this is certainly not where it comes from), there is the categorical notion of the fibered product which is essentially a ``pullback diagram."

I think the term fiber comes from projection like maps $f:X\to Y$ where $X$ looks somehow like $Y\times[0,1]$ (a cylinder over $Y$, or more general a fiber bundle). Look at this picture: 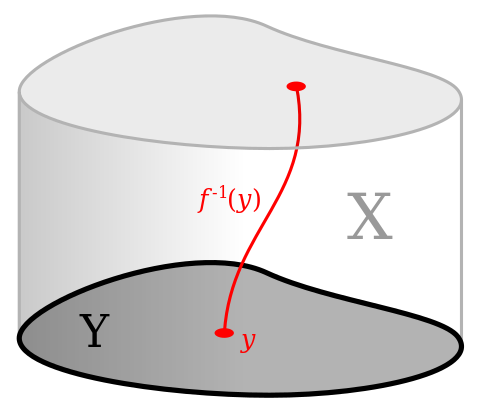 When we ask for $f^{-1}(y)$, we find such a "line" over $y$. If you look at many such points $y$ and their preimages simultaneously, then you can get the impression that $X$ is a thick bundle of these lines, or fibers, tightly packed together (e.g. like a rope).

FIBER, FIBER BUNDLE, and FIBER SPACE. According to J. Dieudonné A History of Algebraic and Differential Topology 1900-1960 p. 387, the terms “fiber” (German “Faser”) and “fiber space” (“gefaserter Raum”) probably first appeared in Herbert Seifert “Topologie dreidimensionaler gefaserter, Räume,” Acta Mathematica, 60, (1932), 147-238. However, Dieudonné adds that Seifert’s definitions “are limited to a very special case and his point of view is rather different from the modern concepts.” The modern concepts appear in the 1940s principally in the work of Hassler Whitney. Whitney defines a fibre-bundle in “On the Theory of Sphere-Bundles”, Proceedings of the National Academy of Sciences of the United States of America, 26, No. 2 (Feb. 15, 1940), p. 148. Within a few years the related terms bundle, fibre and fibre space appeared: see N. Steenrod The Topology of Fibre Bundles (1951). In recent years the spelling fiber has become usual, conforming to common US usage.

Wikipedia adds that Seifert's definition didn't include the base space, and that Whitney first considered only spherical fibers.

Interestingly, the Hopf Fibration was named after Heinz Hopf. His original work, Über die Abbildungen der dreidimensionalen Sphäre auf die Kugelfäche from 1931 describes a surjective map $S^3\to S^2$ that is not nullhomotopic. I cannot find a reference, but I would not be surprised if Whitney put it into the language of $S^1$ bundles.

In modern terminology, a fiber bundle is a map $p:E\to B$ with some additional properties, and each fiber is the inverse image of a point in the base space $B$. It is not too big of a leap to say that the fibers of an arbitrary map are the inverse images of points.

For groups, a map $p:G\to H$ gives a decomposition of $G$ into fibers, each of which is a coset of $\ker p$. If $G,H$ are topological groups, this indeed decomposes $G$ as a fiber space.

Another example is $p:SL(2,\mathbb{R})\to\mathbb{R}^2-\{(0,0)\}$ defined by $p(A)=Ae_1$. The fibers of this map are cosets of the stabilizer of the vector $e_1$, and one can check these fibers are 1-dimensional. This decomposes $SL(2,\mathbb{R})$ as a fiber space, and furthermore shows that the group is homeomorphic to a solid torus.

Not the answer you're looking for? Browse other questions tagged abstract-algebra terminology education math-history or ask your own question.

9
Original source for a quote by Lobachevsky
4
original source for the Borel-Kolmogorov paradox
1
Source for original article by Euler
4
Etymology of the word “function” in mathematics
1
What is the oldest math source that we know of?
0
What is a good source of questions on primitive roots and order?
2
Original source of the persistence algorithm?
2
Use of the symbol $G/N$ for the quotient group
0
Original Source for Norbert Wiener quote “A pattern is essentially an arrangement…” ?