How to determine if point lies on the edge of ellipse, given nonzero edge thickness.

The title is pretty self explanatory - I trying to implement an algorithm that determines whether a point lies on the edge of an ellipse, given a nontrivial edge thickness.

Reference this question to see the motivation:

See this diagram made with my mad MS Paint skills: 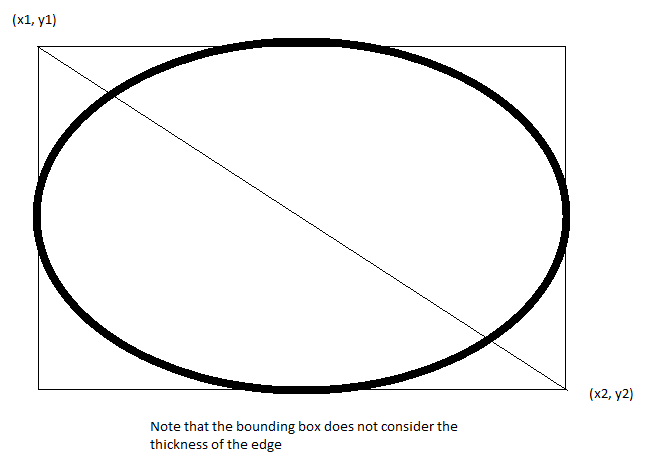 I have an existing algorithm at my disposal to determine whether a point is inside an ellipse, so one thought I had was to create two new ellipses, slightly larger and slightly smaller, and determine if the point lies in one but not the other. I think this would work, but I would have to work out where to position the new ellipses to ensure that they are centered on top of each other.

I'm wondering if that is the simplest approach, or if there is some simpler closed form solution.

Note that the thickness extends in either direction from the center of the edge, both to the inside of the ellipse and to the outside equally.

An acceptable solution could be an algorithm that determines the distance to the nearest edge (meaning the centerline of the edge) of the ellipse in terms of the given variables; calculating the rest would be trivial then I think.

To do an accurate job you should:

The hard part is 2. because the distance must be computed numerically: see here for some methods.

1
Ellipse and rectangle
0
Test if a point is within 2 parametric "cut-off" ellipses
0
Find coordinates of bounding box corners of rotated rectangle
8
Interesting property of triangle and ellipses formed on its edges
2
Representing transformed ellipse
1
Mapping points in a rectangle inside an ellipse
1
How to determine the envelope of some curves, that is a curve tangent to many ellipses
0
Determining an ellipse inscribed in a rectangle given its tangent point at one of the sides