What I know so far: 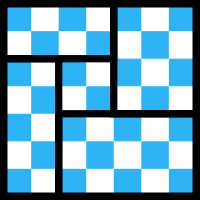 It also looks like for the case of two rectangles, one of $p_i$ needs to divide $m$ or one of $q_i$ needs to divide $n$. (The argument is roughly that if it doesn't, there is no path from one border of the big rectangle to the opposite border with only one type of rectangle. This is only possible if the two types of rectangles form regions that make some checker board pattern, in which case the regions are all of the form $p_1p_2c \times q_1q_2d$.)

I did quite a bit of searching, but could not find an answer.

(Some context: I was looking into prime rectangles of polyominoes. I thought knowing the prime rectangles will give a complete description of all rectangles that can be tiled by the polyomino... but then I realized I did not in fact know which rectangles can be made from another set.)

(Update: I took these initial findings and asked a question on Math Overflow. There are some more answers there.)

It seems the problem is much trickier than I thought. After some more investigation, I have gathered the following, which only provides a partial answer.

For two rectangles that do not satisfy the conditions of Theorem 1, we can divide the sides of the two rectangles and the corresponding side of the big rectangle by the common factor and then test with Theorem 1.

How to find such a $C$ is given in [3]. Unfortunately, this $C$ can be quite large, and is not generally tight (there is a smaller $C$ that also works). So there is a whole bunch of rectangles for which it says nothing.

In addition, it says nothing about rectangles that do not satisfy the conditions. For example, it is hard to know much about which rectangles can be tiled by a set with a $6\times 6, 10\times 10$ and $15 \times 15$. In this example, pairs of squares share a common factor, but we cannot reduce the tiling problem because there is not a common factor among all tiles.

Theorem 4 For every finite set of rectangular tiles, the tileability problem of an $m\times n$ rectangle can be decided in $O(\log mn)$ time.

This result is mentioned in [4] (and some others), but unfortunately it references a mysterious unpublished manuscript, and there is no details available. This is frustrating because it answers my question exactly if they also gives the algorithm.

Not the answer you're looking for? Browse other questions tagged rectangles tiling or ask your own question.

20
How many colors are necessary for a rectangle to never cover a color more than once?
6
Are the only polyominoes that can tile triangles right trominoes?
1
Algorithm to get the ideal size of EXACTLY n squares, to fit them into a x by y rectangle

5
Squaring rectangles
7
Is it known whether strips cannot be tiled aperiodically with a single tile?
15
Is every “even” polyomino with one hole tileable by dominoes?
9
Can continued fraction of $\pi$ tile the plane?
1
Prove that a list of smaller rectangles form a cover of a rectangle as long as they satisfy two simple conditions
6
Are the only polyominoes that can tile triangles right trominoes?
7
Can every polyomino of even size be tiled by $L$-trominoes when scaled up by a factor of $3$?
5
What is the minimum size of a region that can be tiled by every polyomino on up to $4$ cells?