calculating dividing lines of a quadrangle, with perspective.

I am writing a simple piece of software to draw a grid on top of a quadrangle (e.g. 3D depiction of a chess board).

A chess board consist of 8x8 squares or 9x9 lines. So, basically it's a square with 7 dividing lines in each direction (horizontal and vertical). 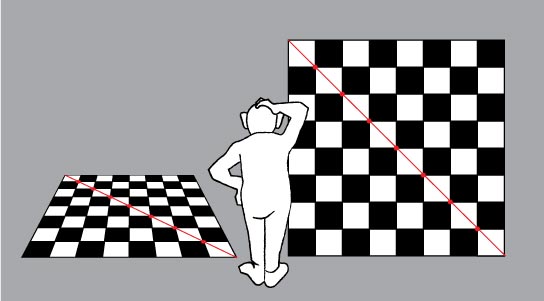 The challenge is to draw the 7 lines on top of this quadrangle. Of course it's not just a matter of dividing the length of each side by 7, because there is a 3D perspective that needs to be taken in account.

I will use this for a computer program. So, I am actually taking a picture of a grid with a smart phone., and I want to create an "augmented reality" by drawing the dividing lines on top of the quadrangle.

So, basically I'm looking for the maths to solve this problem:

What would be the easiest way to do this?

One way to do this is to compute the homography (planar perspective transformation) that maps the square board onto the detected quadrangle in the image, then use that transformation to map grid line endpoints onto the image. There are some advantages to this method. First, this computation is available as a library function in many graphics APIs, so you can do it with basically no work on your part. Second, it allows you to map any point in the plane of the board onto the image, which can be handy depending on what else you’re going to be doing. Third, it might allow you to blast the grid out as a texture with suitable alpha for transparency. If this function isn’t available in the APIs that you’re using, you can do this computation yourself. You can find a description of the process here. For this application, computing the homography is particularly simple: you can use the unit square for the board, in which case you don’t have to compute a second intermediate matrix when using the linked method—the homography is simply $A^{-1}$.

Since you’ve computed the vanishing points of the board edges, another way to go is to use cross-ratios to compute the grid line endpoints: if $A$, $B$, $C$, $D$ are distinct colinear points, then the ratio $$(A,B;C,D) = {AC \cdot BD \over AB \cdot CD}$$ is invariant under projective transformations. If you have three fixed pairs of corresponding points on a line and its image, you can use the equality of the cross-ratios to find the image of any other point on the line.

If a pair of edges is parallel, or nearly so, with the vanishing point far away from the image of the board, then you can just subdivide them evenly instead of going through the above mapping. (In this case, $P_\infty=[x_1-x_0:y_1-y_0:0]$, and if you work through the cross-ratio computation, you end up with $1/\mu$, i.e., $\mu=\lambda$.)

78
Finding the Transform matrix from 4 projected points (with Javascript)

7
Rigid-body matching algorithm and clustering algorithm with groups of lines in 3D
3
Math and equations for external tangent lines between two dissimilar circles?
2
Algorithm to cut a 2D closed shape into roughly equally sized areas in a single path?
1
Intersecting lines from the vertices of a square with an arbitrary interior point.
0
Spacing of perspective points
4
the area that a part of an ellipse consumes in a square of a discrete grid
1
How to find all squares over which a line passes in a finite squared tessellation of the cartesian plane?