How to solve Lyapunov equation via Matlab/Octave [closed]

Let's say that I have my Lyapunov equation for finding the controllbility gramian $P$.

Can I use the command fzero or fsolve to find $P $ ?

Since $P$ only appears linearly in the equation you can solve it as a system of linear equations. But Matlab and Octave are only good at solving this when the unknown is in vector form. By reshaping $P$, and eventually the rest of the equation as well, by stacking each column of $P$ on top of each other it is possible to transform the initial equation into a form that is easily solvable by Octave and Matlab.

then the vector form of $P$ will defined as

In the case of the discrete Lyapunov equation, which is the slightly more general case of your infinite time controllability Gramian

the matrices $X$ and $Y$ are the each others transpose. Using this property then $\tilde{X}\,\tilde{Y}$ can also be written as follows

In order to obtain $P$ you just have to reshape $\vec{p}$ into a square matrix again. One example of an implementation of this might look like:

When comparing this against the Matlab function dlyap() it usually achieves the same accuracy or sometimes a little better for small $n$ (the accuracy is measured my taking the 2-norm of the left hand side of $(5)$ using the $P$ value obtained from each function). However my function is slower to calculate when $n$ is big. Namely my function is around 5 times slower when $n = 10$, but is around 17 times slower when $n = 20$. For more details look at the first figure below. Above $n = 10$ Matlab sometimes also complains when running my function that the matrix M is close the singular. However when comparing the accuracy of my function to that of dlyap() then mine is much better above $n = 13$ as can be seen in the second figure below. I think I would prefer accuracy over computation time, especially if you do not have any control over how accurate the result is going to be. 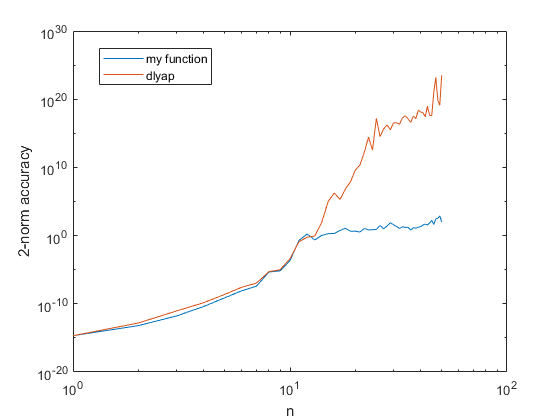 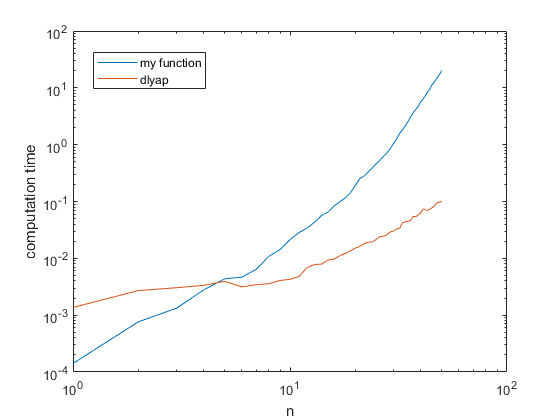 When looking into the description of dlyap() I looked up one of the references, which mentions the use of Bartel-Stewart's algorithm, which is also mentioned here which states: "...which consists of transforming A and B into Schur form by a QR algorithm, and then solving the resulting triangular system via back-substitution. This algorithm, whose computational cost is $\mathcal{O}(n^3)$ arithmetical operations". So that might also be a place to look into if you would like to know how Matlab potentially does it. However this would go way to deep into numerical methods for the scope of this question, so I will leave it as this. Also this method might give results which have really poor accuracy at large $n$.

Not the answer you're looking for? Browse other questions tagged matlab control-theory optimal-control linear-control or ask your own question.