So why is that?

This observation is the departure point for any and all applications of group actions. What you have is actually a bijection between $G/G_m$ and $G.m$, $aG_m \mapsto am$. This to me is one of the most remarkable expedients of group actions. When someone says a group is acting on a set, it immediately tells us a whole bunch of things about the group and the set. (When I read about group actions for the first time, I thought that one could, without much effort, define an action between any group and any set. This is NOT TRUE.)

The orbits of a group action are equivalence classes for the relation $x \sim x'$ if $x' = gx$ for some $g \in G$. The orbits partition the set, i.e. the set can be expressed as a disjoint union of orbits.

This image is what you must keep in mind when you know a group is acting on a set. 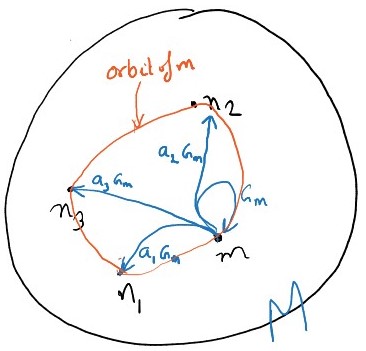 Not the answer you're looking for? Browse other questions tagged group-theory group-actions or ask your own question.