From the topos theory perspective it is a general motto that sheaves are continuously variable sets. The internal logic of sheaf toposes justifies this motto, but I would like an additional "local" justification from the bundle picture.

Intuitively, I feel a continuously variable set might just be a continuous open map (see below) with discrete fibers (to ensure they are sets and not cohesive spaces). As this answer points out, these properties do not imply local homeomorphy since e.g $z\mapsto z^2$ as a function $\mathbb C\to \mathbb C$ satisfies them all but is not homeomorphic about zero. In addition to continuity and openness, local injectivity is needed (it implies discreteness of fibers).

As a simpler example, the function $\mathbb R\to [0,\infty)$ defined by $x\mapsto x^2$ is continuous and open with discrete fibers, and the variation of fibers seems continuous to me. I would like to understand why the "collapse of fibers" at zero should be viewed as pathological/discontinuous. Before comparing the variation of fibers at zero with that of a local homeo to $[0,\infty)$, here's my intuition for the properties involved.

So a function $f:X\to Y$ is a local homeomorphism iff it's a continuous open local injection.

For a concrete comparison of local homeomorphism vs continuous open map with discrete fibers consider:

I have tried to draw the variation of fibers below.

Question. Why should I think of the upper drawing, where the double fibers "collapse" into a point" as "discontinuous variation"? 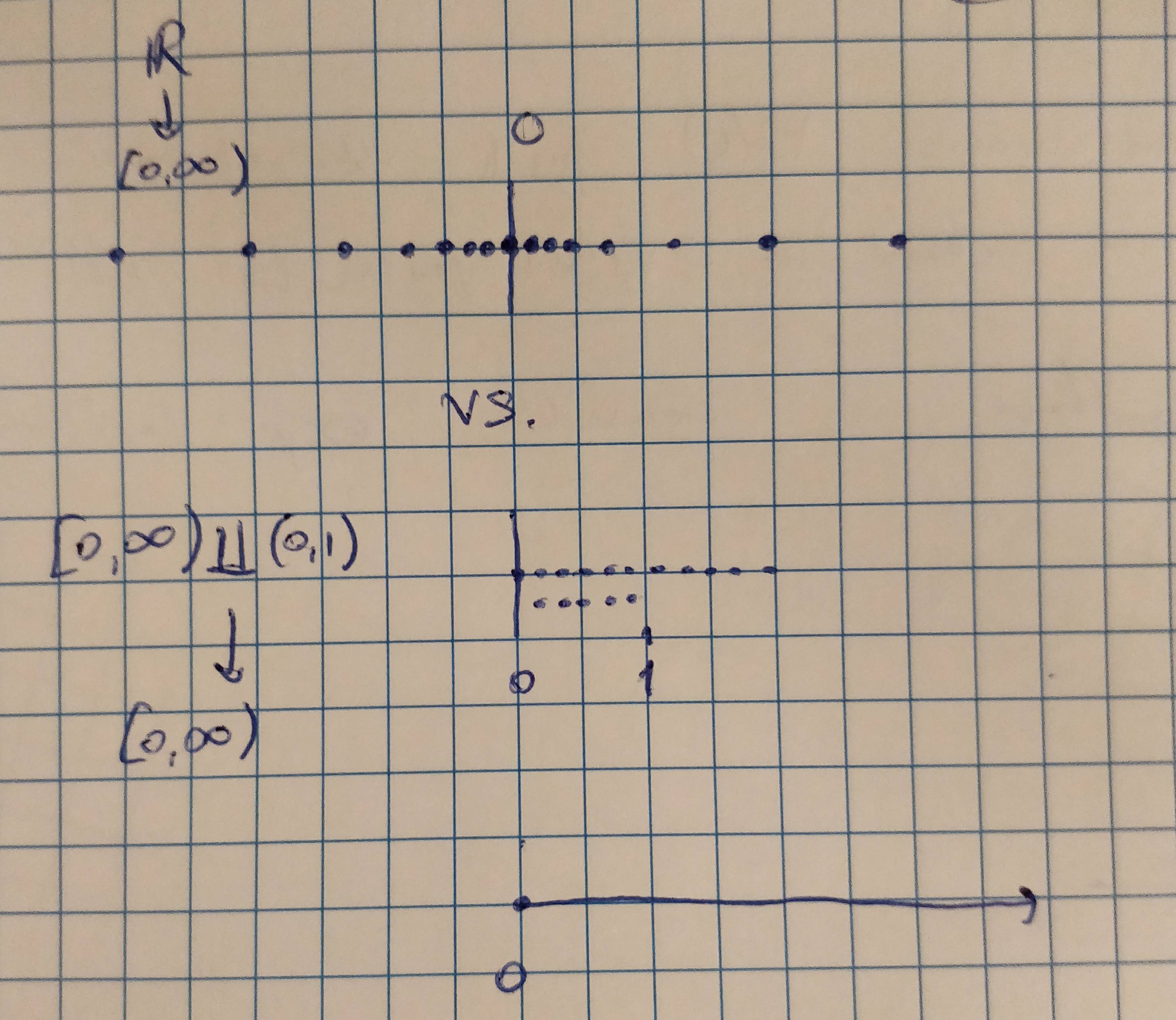 Perhaps the "justification" is to simply avoid duplicate copies of the same variable set, where one copy is the unramified version and the other is the ramified version.

I think presheaves correspond to bundles with covering local sections, whose total space topology is generated by its sections. If so, then the second picture in the question has topologically distinct representation of the same fibers: ramify the two branches to have them both converge at the endpoints.

4
Formalizing continuously indexed spaces in fiber bundles?
5
Sheaf morphisms, images, cokernels and stalks
1
Is either $\sigma=\tau$ or $\sigma$ is the is the discrete topology ? (True/false)
2
Local homeomorphism iff discrete fibers and open and [?]
2
Is a local homeomorphism with homeomorphic fibers a covering map?
2
Inducing a sheaf on an open subset, or any subset?
3
Section's local behaviour of locally constant sheaves
1
local trivialisation of $G$-torsor
1
Every local homeomorphism is an open map (Goldblatt's Topoi)
1
Characterisation isomorphisms of ringed spaces: $(f,f^\flat)$ iso iff $(f,f^\sharp)$ iso?