Why is does this vector field have zero-curl everywhere? Plus, broad questions about curl. 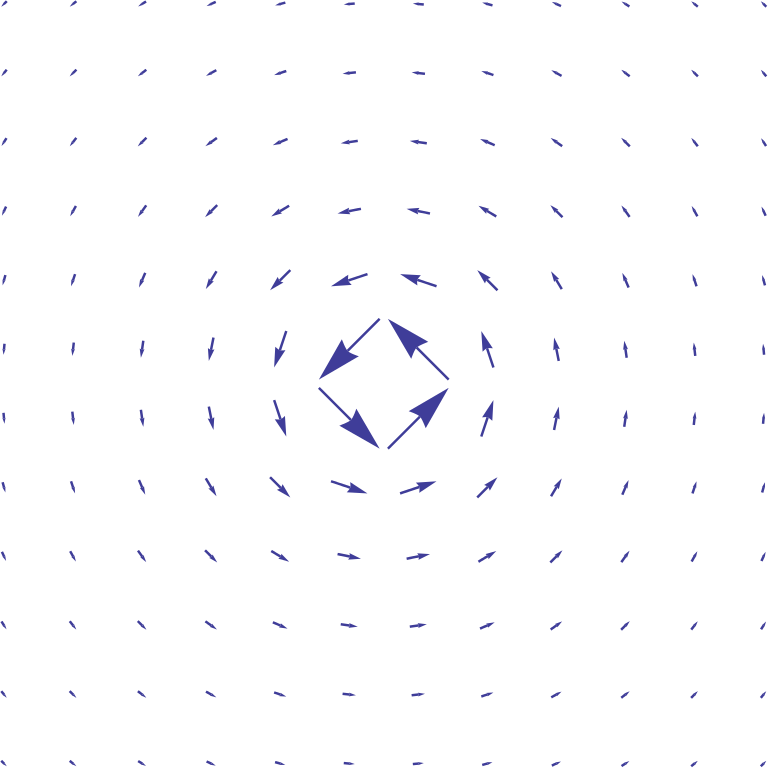 Can anyone provide an intuitive explanation for why this field has no curl? The article says it's due to it not being "simply connected" (recall that there is a line in the direction of the z axis passing through $x=0, y=0$ for which the field is not defined)...but this is not intuitively satisfying, and they don't really elaborate.

My admittedly limited understanding of curl is as follows: Take some closed shape, and at every point along that shape integrate the magnitude of the vector field in the direction of travel along that shape. The curl at a point is the limit of that integral as your shape shrinks to just that point.

More broadly, can there be vector fields where you can draw a closed line for which the integral above is positive but for which the curl is zero at every point? I mean, that appears to be true given the claims the Wikipedia article is making. If it is true, can someone explain why this doesn't violate the "spirit" of what curl is trying to capture?

The curl is a local property at a point. (Your description above captures this: "The curl at a point is the limit of that integral as your shape shrinks to just that point.") The overall rotation you see in the picture is a global property.

When the curl is nonzero at a point, you can detect the rotation locally around that point. In the vector field you have shown, you cannot detect the rotation locally at any point of $U$. If you were standing at any point $u \in U$ and subject to forces described by that vector field, you would not experience a rotation around $u$. So it makes sense that the curl is 0 on all of $U$.

That wasn't very precise but I hope it helped somewhat.

Too often curl is described as point-wise rotation of vector field. That is problematic. A vector field does not rotate the way a solid-body does.

I'll use the term gradient of the vector field for simplicity.

Short Answer: The gradient of the vector field is a matrix. The symmetric part of the matrix has no curl and the asymmetric part is the curl.

Extra details: Assume gradient of the vector field, the concatenation of $[d\vec{F}/dx, d\vec{F}/dy, d\vec{F}/dz]$, is symmetric. To visualize this, for any given point in three dimensional space, consider an infinitesimal ball. Symmetric gradient of the vector field describes this ball stretching to an ellipsoid at certain axes. The axes are the eigenvectors and the magnitudes are the eigenvalues.

But in general the gradient matrix is not symmetric. Any matrix is sum of an asymmetric and a symmetric matrix. The asymmetric part acting on the infinitesimal ball, flattens it to a circle, as it has determinant of zero. And also, it rotates this circle!

The direction perpendicular to flattening is the direction of the curl. The magnitude of curl is the size of the three components describing the asymmetric matrix.

As for path integral definition of curl, it is maximized when it is taken on this flattened circle.

I think you have misunderstood the wiki article. The vector field is curl free in $U$ because it can be shown by direct calculation that it is zero everywhere for $z \ne 0$, not because $U$ is not simply connected.

The point of the article is that although it is curl-free in $U$, but because $U$ is not simply connected, therefore one cannot define a potential.

I know this post is old and Ted already explains the intuition very well so some of this will be a retread of his post. Nonetheless, for the benefit of the visually-include I thought it may be helpful to focus on the scenario from the visual perspective afforded by the diagram.

But, as previously stated, $Z$ is not within the domain of $F$, so clipping out that one section, we have $U$ as defined by your original post. But $U$ does not contain the section with curl, hence $U$ is curl-free.

Not the answer you're looking for? Browse other questions tagged vector-analysis vector-fields or ask your own question.