intuition behind discrepancy in expected number of coin tosses

Yesterday evening I read a very interesting article on prime numbers which contained the following paragraph on coin tosses:

I immediately tried to look into this question. Using the formula provided by André Nicolas, it can be shown that the expected number of coin tosses we need before getting $n$ consecutive heads is given by:

However, the expected number of coin tosses required to get the $HT$ pattern is 4 not 6. I still find this quite counter-intuitive. In fact, I ran a simulation using the following python code:

And I noticed that their distributions behaved very differently: 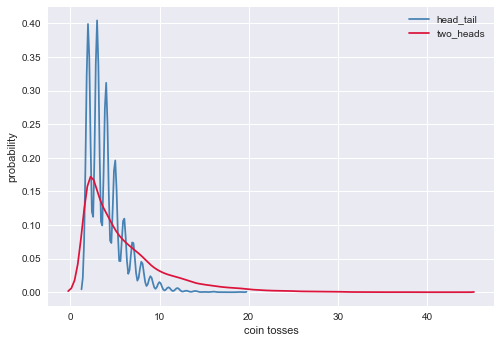 It's by no means intuitive to me that the behaviour of these two distributions should be very different and yet they are remarkably different. Is there an intuitive reason why this must be the case?

Alice and Bob toss their coins until they see their first head.   The expected tosses until this happens is the same for each.   Then things are different.

Alice just needs to continue until she finally sees a tail.

However, if Bob doesn't immediately see a head on the next throw, he needs to start over from the beginning.