What is the relation between min-vertex cover and min-cut in a bipartite graph?

In a bipartite graph, the size of a maximum matching equals the size of the minimum vertex cover.

I want to prove above theorem using max-flow-min-cut theorem. So I am trying to find the relationship between min-cut and min vertex cover, do you think |min-cut| = |min-vertex-cover|? If so, any proof for it?

I think your confusion lies in the correspondence between flows in a bipartite graph and maximum matchings. To find a maximum matching, consider the bipartite graph $G=(L,R,E)$ where $L$ is the set of vertices on the left side of the bipartition and $R$ is the set on the right side. Now, add a new vertex $s$ and a directed edge $(s,\ell)$ for each $\ell \in L$. Also, add a new vertex $t$ and a directed edge $(r,t)$ for each $r\in R$. Orient all of the edges in $E$ towards $T$ and set every edge in your new graph to have capacity 1. Below is an example of the resulting graph: 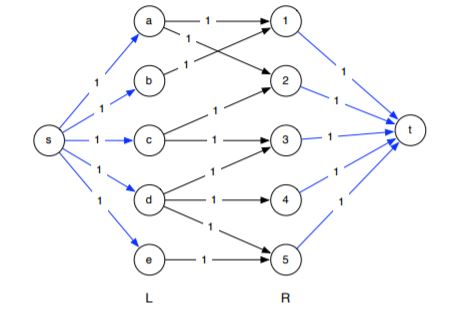 Solve for max flow on this graph with $s$ as your source and $t$ as your terminal. The saturated edges (which were originally in $E$) in a max flow for this graph correspond to the edges in a maximum matching, and the flow value is the size of said matching (convince yourself! i.e. assume you have a max matching that is bigger/ smaller than the flow value and see what that implies).

Now, the flow value also corresponds to the size of a minimum vertex cover, but NOT NECESSARILY the size of a minimum cut. This is because we added a source and a sink node, and the edges from $s$ to $L$ and from $R$ to $t$ which could now be part of our min cut in this new graph. Hope this clears up some confusion.

Contrary to the suggestions of the other users, I believe this can be proved (the counterexample provided does not address the OP's problem as OP clarified it in the comments).

If I'm interpreting your question and comment correctly, you mean a minimum set of edges such that their deletion would make the graph disconnected. Consider the path with $4$ vertices, which is bipartite. You'll need at least two vertices to hit every edge, but deleting any edge will make the graph disconnected, so $|\mathrm{min\;cut}|\neq|\mathrm{min\;vertex\;cover}|$.