Elementary trigonometry and the right-angled triangle. 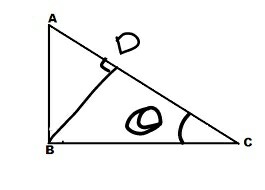 Statement: Hypotenuse doesn't change when changing the observation side. Now when $\angle BCD$ is $\theta$, so $BC$ the base and $AD$ the perpendicular such that the area of $\triangle ABC$ can be written as $S = \frac {BC \cdot BD}{2}$.

Is the statement true?

There are two separate statements here!

"Hypotenuse doesn't change when changing the observation side". I am not familiar with the term "observation side" but I presume that has to do with which side is the "near side" and which is the "opposite side". The hypotenuse is the unique side opposite the right angle so this statement is true.

Another way to see this is to imagine the right triangle "duplicated" on the other side of the hypotenuse. That is, imagine a new point, D, such that AD is parallel to BC and the same length as BC. Then CD is also parallel to AB and the same length as AB. "ABCD" is a rectangle with side lengths AB and BC. It's area is $AB\cdot BC$. The original triangle, ABC, is half of that rectangle so its area is $\frac{AB\cdot BC}{2}$.

Observation side or base $BC$

Observation side or base $AC$

It does not matter which is the base or observation side. The base and altitude should be always perpendicular. Also

Not the answer you're looking for? Browse other questions tagged geometry trigonometry area or ask your own question.

0
The area of a right Triangle.