So recently I was watching some videos on complex numbers. I was surprised to learn the uses of $i$ in different problems. For example, I never thought it would make sense that $x^2 + 1 = 0$ has any solutions at all. But apparently it does when you consider that this equation actually has two solutions that aren't visible by graphing this equation on your calculator.

However, my question is somewhat related yet somewhat different. What if we had the following equation:

I noticed when I tried to solve this problem I came across two main issues:

How would the solutions, if any, differ from this problem and the first problem?

Keep in mind, I'm not a mathematics genius or anything, so I hope you won't be disappointed with me for suggesting a problem like this because I'm simply just curious. This is not meant to stump anyone, nor is it meant to waste your time. Any responses would be greatly appreciated.

You can define a new (extended) number system with the property that there is a solution to $0x=1$, and call that solution (or one of the solutions if there are more) $k$. You just have to be willing to accept the consequences. For instance, if you still want the property $0+0=0$, and the property of multiplication distributing over parentheses, then you get $$ 1=0k=(0+0)k=0k+0k=1+1=2 $$ so suddenly $1=2$ in this new number system. That's probably not desirable. Therefore you have to give up at least one of the three assumptions I've made above. I prefer to give up the existence of $k$.

One of the properties of both $\mathbb{R}$ and $\mathbb{C}$ is that the number $0$, which is in both sets, returns $0$ when multiplied by any other number.

$0/0$ is also undefined, simply because you can't divide by zero (by definition) in $\mathbb{R}$ or $\mathbb{C}$. You can define your own number set, as Arthur mentioned, where division by zero is possible, but it will have very different properties from the reals that we know and love.

One of the problems with high school and some undergraduate math courses is that they teach you that the Complex numbers were just "made up" to solve a problem, which really isn't true. If we want to discover a new number set, we have to make sure it has nice properties, like the Complex numbers do.

So TL;DR, while $x^2+1=0$ has solutions in the Complex numbers, $x*0=1$ still has no solutions in any number set that is really used for anything.

You can literally alter your definition of multiplication if you'd like to, but then you've got to accept the consequences of actually doing that.

Note 1. First of all, this is a very nice question, congratulations! You're very right to question those "weirdnesses" that arise from complex numbers, and not just accept them as magical. Keep it up!

[...] solutions that aren't visible by graphing this equation on your calculator

I would like to start this answer with a surprise: it is possible to see it graphically!! Your calculator plotted a 2D graph, right? Your calculator was thinking in real numbers only. The "complete" graph, taking into account complex numbers, would have to be 4D! If it was possible to plot a 4D graph, it would be possible to see the two solutions! Since 4D graphs are clearly impossible, though, there is a "hack" using two 3D graphs: 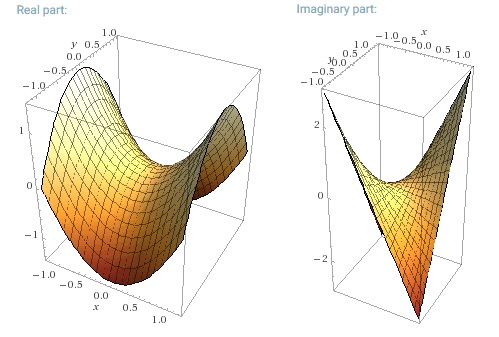 I won't be very detailed, because this is only a motivation for the actual answer, but basically you must visualize, in each 3D graph, a horizontal plane (on zero) intersecting the plotted surfaces. Then, you must look for a point that lies in both intersections. And only the points $(0,1)$ and $(0,-1)$ will satisfy this condition (these points are precisely $i$ and $-i$, respectively)!

[...] create your own solutions to this problem

Some teachers introduce the concept of complex numbers by saying something on the lines of "until now we believed that there is no solution to $x^2 = -1$, but let's define a number, and call it $i$, such that $i^2 = -1$", and see what happens".

This makes it look like "the problem has no solutions, but we will create a solution nevertheless". You are totally right to seek a similar thing: can we create a solution to $x \times 0 = 1$, and call it $k$? This is why I don't like this approach, it is very misleading.

But there is a problem. A more "correct" approach would require a lot more abstract, mathematical thinking, which is inappropriate for several audiences. Not inappropriate for you, though! I will try to give you a start. If you feel motivated, you are very welcome to post further questions in this site and continue learning.

You are used to manipulate real numbers. We have the numbers, and some operations we can do to them, especially adding and multiplying. Also, there operations have some nice properties. For example, both are commutative, right? It would be weird if addition and multiplication weren't commutative. In algebra, we work with other objects, that are not the real numbers, but "behave similarly", in the sense that we can also do things similar to adding and multiplying them. When we have a set of objects like this, we call this set a field. So the real numbers, alongside the usual addition and multiplication operations, are an example of field. The rational numbers are also a field.

Now, if we take any set of objects whatsoever, and manage to define two operations with them that behave similarly to the addition and multiplication of real numbers, we have a field! I think this is the best way of thinking about complex numbers. What we do is:

And with these definitions, it turns out that we also have a field!! That's why most of the behavior of complex numbers are very similar to the real numbers: both are fields.

Now, something amazing happened: what happens if I multiply the complex $(0,1)$ by itself? The result, according to the rules already defined above, is $(-1,0)$.

Now we can define a new notation. Instead of writing $(a,b)$ to represent this pair of real numbers, we will write $a+bi$ instead. Then, we suddenly realize that, from what was said above, it is a fact, not a definition, that $i^2 = -1$.

Now addressing your specific question about $x \times 0 = 1$: No, it is not possible. As I said above, the sets of rational numbers, real numbers and complex numbers are all fields. And it is a mathematical fact (that I won't prove here for brevity) that in any field whatsoever, anything times zero is equal to zero. If you want to define a solution to $x \times 0 = 1$, your extended set of numbers can't be a field. And this is very bad: you technically can do it, but you won't be able to manipulate the numbers as you're used to. It will break almost all arithmetic rules you learned since you was a kid.

In many aspects of life, it is good to use your mind. In some aspects, using one's mind becomes a problem [like when trying to understand quantum stuff :)]! Let's discuss your questions:

what is $0$/$0$? The result of the above is undefined value. In Mathematics, we can't divide any quantity by zero and get a finite defined quantity. However, we could discuss what value an algebraic expression could assume as it goes closer to a certain value, using the concept of Limits, which is discussed in Calculus. For example we could find the value $1/x$ tends to get close to when $x$ goes very very close to zero. Using Calculus, The limit in this case is undefined.

Does $0$/$0$ "cancel out?" No, because we are not allowed to use the division by zero in the first place.

isn't $1/0$ undefined? Correct. It is illegal to attempt to perform the operation too!

if I have another problem like this one, What is the solution of $x*0=5$

There is no value for $x$ that could satisfy the right hand side. This is the same case for $x * 0=1$. However, notice that while both result in an undefined value, this does not mean that we can say that the undefined values are equal.

Sometimes you need to resolve the denominator before cancelling expressions. For example, if you have this equation:

You can't cancel out the expression $(x * 0)$ from the left hand side and get $t=1$. You need to simplify the expression in denominator to get $0/0$=$t$, which leads to the result that $t$ is undefined.

Also, you can't convert the above expression to:

Think of the above as rules one need to follow to get consistent results.

The way I see it your question is this:

Okay. The idea of "making up" a new kind of number is called "extending" a number system, and it's allowed as long as the results are consistent.

And there are some not so basic rules. $1$ is the smallest number. Every number has a number that comes immediately after it. Etc. Those are interesting rules but they are not fundamental.

This is consistent with our idea that all numbers are distinct and that we can add any two numbers together.

The next extension: Can we solve $x + a = 0$. We "make up" negative numbers. They are consistent with our most important rules. But we no longer have the rule that there is a smallest number.

The next extension: Can we solve $nk = m$. We have to make up the rationals. We no longer have the rules that every number has a number that comes immediately after it. But the must important one is that numbers are distinct. We have to make an exception that $0k = m$ has not solution. As that would mean $m=0*k = 0+0+0... = 0$ and we have two different numbers equaling the same.

Upshot. Allowing $x^2 + 1 =0$ by "making up" $i^2 = -1$ makes things weird BUT consistent. We still have multiplication and addition are close operations. (We always add or multiply any two numbers together) and numbers are distinct.

We lose some basic rules. The most strange is we can no longer say numbers are bigger or smaller than each other! $i \not < 0; i\ne 0$ and $i \not > 0$. $i$ simply... goes off at a right a right angle. We just can't say that one complex number is bigger than another!

But otherwise things are consistent.

But $x\time 0 = 1$ is simply not consistent and can't happen in any extension, on which we have basic rules of arithmetic.

2
How can I solve for a single variable which occurs in multiple trigonometric functions in an equation?
1
Solving graph of trigonometric function and rational function
5
$P(P(\cdots(P(x))))$ and its integer solutions
3
How to solve the trigonometric equation $\cos (\pi\theta/\beta) - \cos(2\pi\theta/\beta)=0$?
0
Least value of n that makes the nth derivative of the function non zero at $x=0$
0
Graphing logarithmic functions
3
“Extraneous solution” solves original equation
0
Number of roots to given equation?