I need help with a high school geometry proof. I think I've figured out why the prompt is true, but the proof attempt I've come up with seems very inelegant. Is there an easier method I'm missing?

Consider two circles with the second internally tangent to the first at point $A$ and also passing through the center of the first. Show that every chord of the first circle which has $A$ as an endpoint is bisected by the second circle. 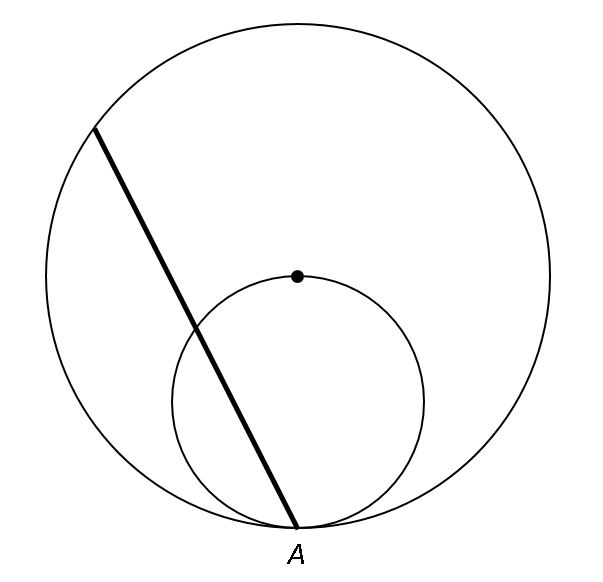 Let there be any chord of the first circle which has $A$ as an endpoint. Let the other endpoint of the chord be called $B$.

Then let the following line segments be drawn:

Segments $AC$ and $BC$ are the same length because they both represent the radius of the first circle.

Thanks in advance for your help.

Another proof is to take the center of the circles being $C$ (the bigger), $D$ the smaller, the intersection point $I$ for the bigger circle and $J$ for the smaller.

We have that the triangles $ADJ$ and $ACI$ are similar since they have congruent angles (which is because they are isosceles and sharing an angle (of the leg). Also we have that $AD$ is half of $AC$ which implies that $AJ$ is half of $AI$. 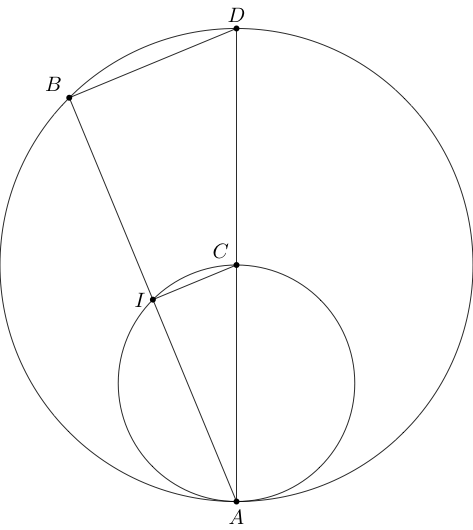 From the tangency point $A$, blow up the small circle such that $$\text{The small circle} \rightarrow ^{\text{gets mapped to}} \text{The circle twice as big}$$

Since the dilation is of factor two, QED.

Though what I've said is a mere restatement of what others said before, the idea of dilation, called Homothety in general is an useful tool for Eucledian Geometry (check eg. the proof of the existence of Nine Point circle)

I think next two facts give some hints.

This immediately gives you $2AI=AB$, since those are chords on the arcs of the same angle in circles with radius ratio of $1:2$.

One can use a trick that works rather often in 2D geometry, i.e., viewing it at as a 3D issue (see figure below).

Consider the big circle as being in a certain base plane. Let $A$ be the point of tangency of the two circles. Then consider the whole figure as the projection of a certain cone that is described in this way:

As projections preserve the ratio of aligned points, we will still have $AM''=M''M$ ($M''$ denoting the vertical projection of $M'$). 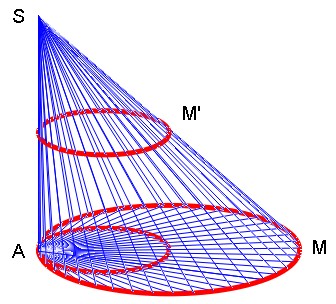 0
intersection of three chords
1
math contest geometry proof problem
0
Ptolemy Trig/Geometry Help Please
1
Angle θ Providing Maximum Ratio
0
How do I Find The Chord From Only The Arc Length?
1
Longest Chord in a circle?
1
Geometry: Find the radius of a circle given parallel secants
0
Arc segment of length 1, segment's Y-coordinate & circle's center Y-coordinate: return arc segment's X-coordinate
0
How to get the point at which a line passes through another line perpendicular to it