and then comparing the result to the visual field limits.

I thought it should be equivalent, but after seeing some visualizations I'm convinced they are not.

I realize this should be relatively trivial, but I just can't wrap my head around it and I've been stuck on this for the last few hours. I've also looked for this in google as I thought it would be a rather common problem, but I can't find exactly what I'm looking for.

How do I get the vertical angle between these two vectors?

Here are a few graphs:

In this site z is up, so please don't get confused.

First here is the 3D plot 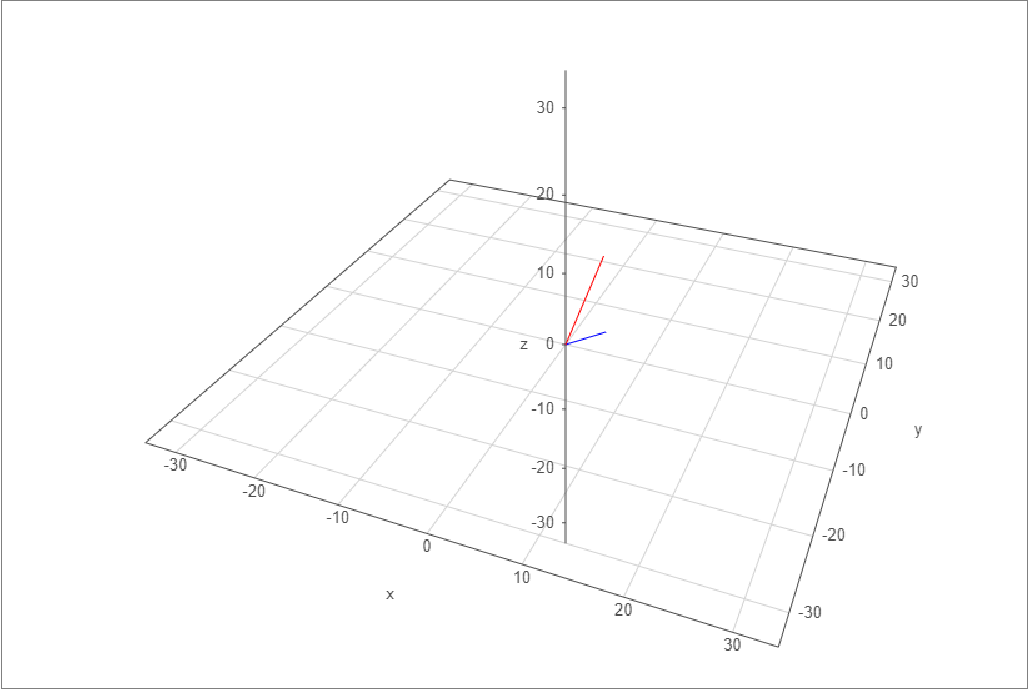 Then we can project it to a top down view (equivalent to ignoring the y or in this case z component and look at the angle $\theta$). This way we get the horizontal angle between the vectors 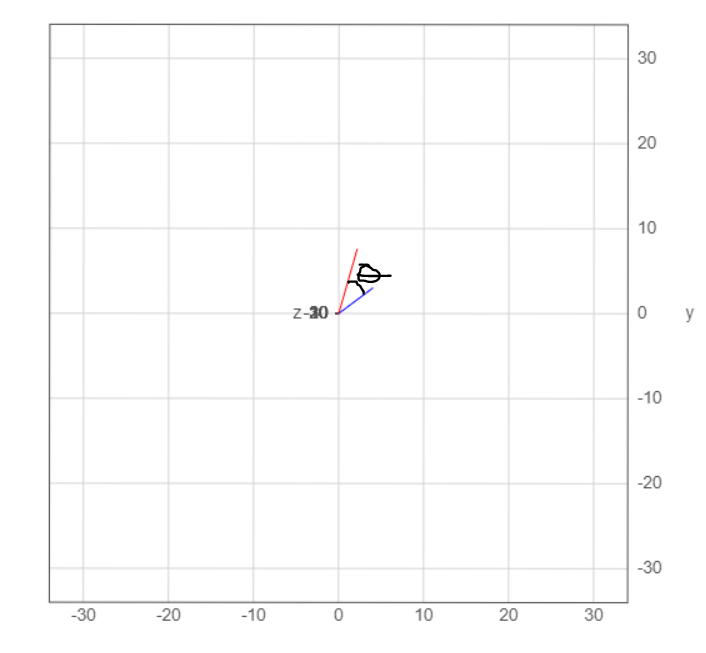 If we then try to do the same for the vertical angle, we look at the side and front views and we can see that $\beta \neq \gamma $ 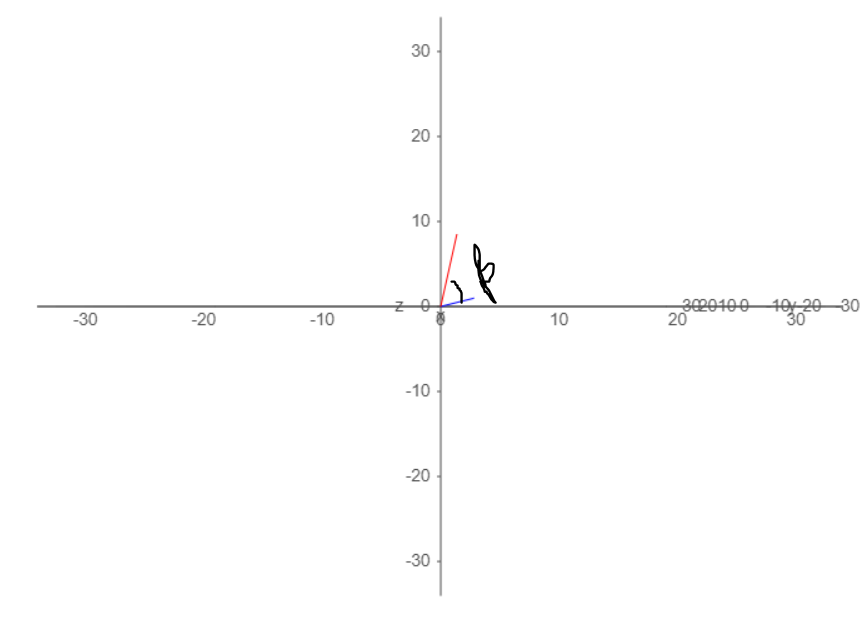 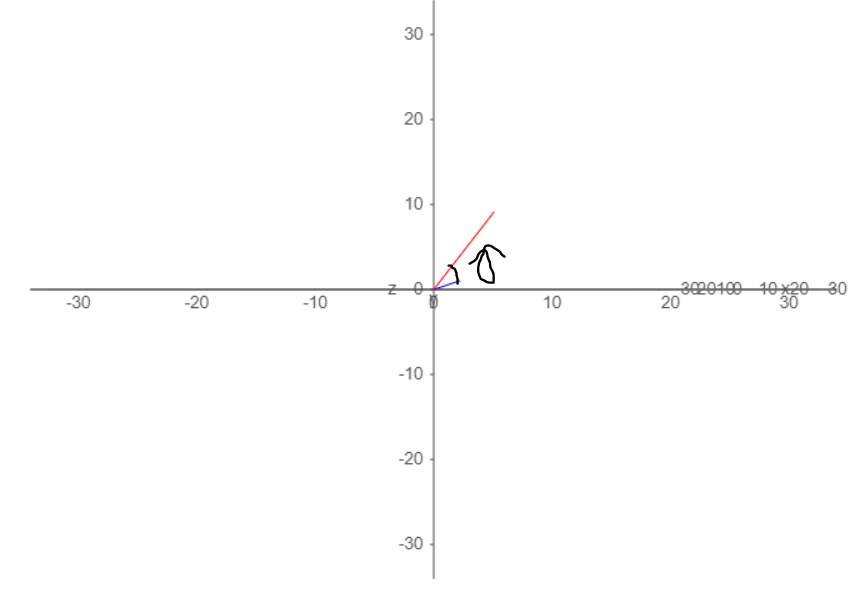 You can’t really measure the “vertical” angle between the vectors via orthogonal projection because that distorts the angle. The underlying reason that projecting onto the $x$-$y$ plane (in the second coordinate system in the question) works for the horizontal angles but in general there’s no orthogonal projection that will get the vertical angles right is that all of the yaw rotations use the same rotation axis, but pitch rotations don’t.

You can, however, project the vectors/points onto the unit sphere, i.e., convert to spherical coordinates: $$\theta=\arccos{z\over\sqrt{x^2+y^2+z^2}} \\ \varphi = \arctan\frac yx.$$ (We don’t care about $\rho$, the distance from the origin, here.) You need to select the correct quadrant for the arc tangent, but math packages have a built-in variant of this function that takes care of this for you. Note, too, that $\theta$ increases downwards from the $z$-axis. Since there’s no camera roll, the horizontal visual angular separation is just the difference between the azimuths $\varphi$ and the vertical visual angular separation the difference in inclination $\theta$.

Using your example of $a=(4,3,1)$ and $b=(2,7,9)$, we have $\varphi_a=\arctan\frac34\approx36.870°$ and $\varphi_b=\arctan\frac72\approx74.055°$, for a difference of approximately $37.185°$, well within the field of vision. This matches the angle obtained from the projections onto the $x$-$y$ plane. It’s probably less computationally expensive to use the latter method since you can compare directly against $\cos 80°$ instead of computing an arc cosine, but this really only works because the visual field is horizontally symmetric. If you had different angles to the left and right, using the arc tangent is better since cosine doesn’t distinguish between different directions.

It’s also possible to compare the vertical angles by rotating $b$ so that it lies in the same vertical plane as $a$, but that seems like more work than just converting to spherical coordinates.

If you have to check a lot of points for visibility, computing all of those inverse trigonometric functions could get expensive. The field of view is bounded by four planes through the origin, so an alternative approach is to compute the equations $ax+by+cz=0$ ($\mathbf n\cdot\mathbf x=0$ in vector form) of these planes that make up the sides of this pyramid. The sign of dot product of the normal to the plane $\mathbf n$ with an arbitrary point tells you on which side of the plane the point lies: if positive, then the point lies in the direction of $\mathbf n$ from the plane; if negative, it’s on the opposite side; if zero, the point, of course, lies on the plane. You can arrange for all of the normals to be inward-pointing, so that a point is visible iff all four of these test values are non-negative.

Indeed, setting $a_x=b_x=0$ (looking down the x-axis) is not the same as setting $a_z=b_z=0$ (). The "vertical angle between two vectors" is not unambiguously defined in an obvious way.

Consider the plane P that contains the two vectors $\mathbf{a}$ and $\mathbf{b}$. The angle between the vectors in that plane is well-defined. That is what we get by using between two 3-d vectors the cosine formula you have written down.

You can choose to make your own definition for "vertical angle". For example, let $\theta_a$ be the angle between the vector $\mathbf{a}$ and the xy plane. Let $\theta_b$ be the angle between the the vector $\mathbf{b}$ and the xy plane. You may choose to define the vertical angle as $|\theta_a-\theta_b|$. In the example I gave, this angle is zero.

A case where it is unambiguous is when the plane P is perpendicular to the xy plane. In that case, $|\theta_a-\theta_b|$ is the same as the result from the cosine formula. But please note that in general, that is still going to be different from what you get by looking down the x axis (setting $a_x=b_x=0$) or the y axis.

Not the answer you're looking for? Browse other questions tagged trigonometry vectors angle or ask your own question.

0
Measuring angle of diagonal from vertical
1
How to count angle between vector and horizontally oriented vector?
0
Without using angle measure, how do I prove that vertical angles are congruent?
0
How do I get the exit angle of a body?
0
Why is the angle between vectors restricted?
8
Angle Between Two Vectors Facing A Point