Number of paths of length $n$ starting from the origin in the $X-Y$ plane.

Also step $R$ is not followed by $L$ and vice-versa. 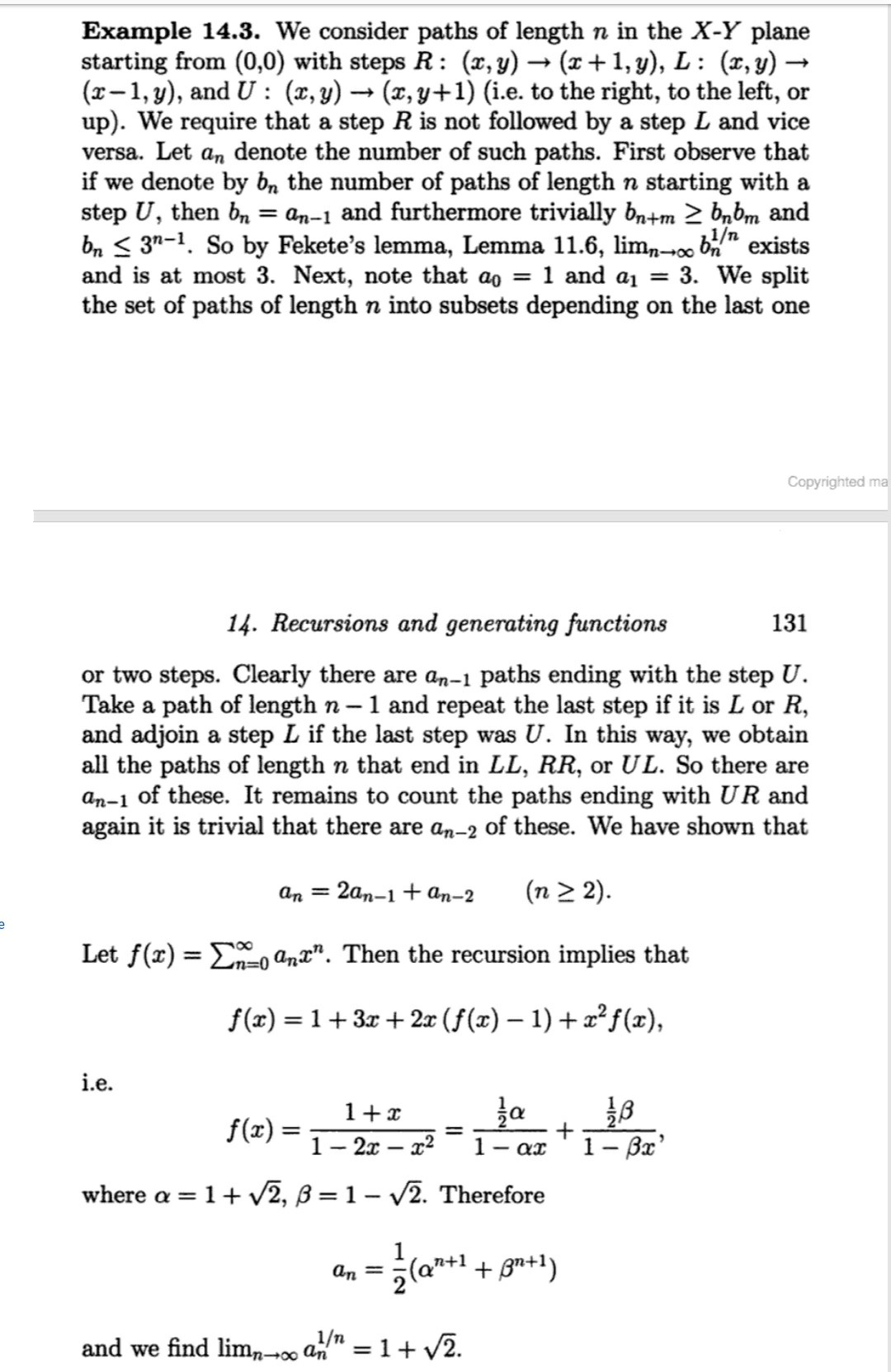 I have some problem understanding it.

Any help will be very helpful.( If any other way of understanding is possible please let me know) Thank you.

To count $a_n$, the number of paths of length $n$, the author is splitting the set of such paths into the disjoint union of three subsets:

Note that the latter two cases combine to count all of the paths ending in L or R, as LR and RL are not permitted.

@Jihoon Kang addressed your first concern. For the remaining two, both points are addressed by counting the three subsets above individually.

First, any path ending in U may be preceded by any legal path of length $n-1$, so there are $a_{n-1}$ paths in the first subset.

Second, given any path of length $n-1$, there is a unique way to complete it such that the path ends with one of LL, RR, or UL. You are correct that it is legal to follow a U with an R, but that would create a path that is not in the second subset, so it is not counted here. The number of paths in this subset is $a_{n-1}$.

Finally, a path ending in UR can be obtained by adding UR to any path of length $n-2$, so there are $a_{n-2}$ paths in this subset.

Since the set of paths of length $n$ is the disjoint union of these three subsets, we get the recurrence $a_n = 2a_{n-1} + a_{n-2}$ by simply summing the sizes of the three subsets.

2
Proof of recursive formula for Catalan numbers, and their interpretation as the number of paths
0
Recursion Relation Problem: Counting Database Identifiers Recursively
1
Question about a proof of “Graph $G$ has no odd cycles $\implies$ $G$ is bipartite”
1
Number of Paths on Complete 2-Digraph with Loops
3
Number of paths in a grid moving E, NE, SE only and ending in the top right
1
Linear recurrence for number of n-step paths in finite graph
3
number of paths in the Cartesian plane which don't intersect the line $y = x+1/2$