How Should One Define the South-Western-Most Point of a Two-dimensional Figure?

Suppose we are given a (connected and compact) two-dimensional figure $X$.

How should one best define the south-western-most point (SWMP) of $X$ mathematically, so that it agrees with one's intuition?

I know this question is a bit vague, so I will include some examples to explain what I mean.

I think for any rectangle (with sides parallel to the axes), the SWMP should be the bottom-left-hand corner as indicated below:

For a rhombus, though, the SWMP isn't maybe as obvious. Here are some options:

Finally, for a non-convex shape, a notion of SWMP is counter-intuitive; maybe it would be something like this: 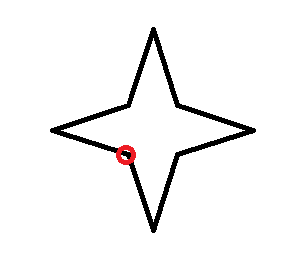 Making the center of mass the origin of the Cartesian plane, we consider all possible line segments in the third quadrant contained within $X$ andemanating from origin. We select one with the longest length and call its intersection with $X$ a SWMP.

This seems to make sense for the rectangle's SWMP, but not intuitively for some of the other shapes in general. For instance, the non-convex shape's SWMP according to this definition would either be the most western point or the most southern point, which seems intuitively false.

P.S. This question is motivated by the fact that the Cape of Good Hope claims to be the SWMP of Africa.

Given a (bounded plane) set $S$, to find the extremest point in direction $D$ I suggest forming the convex hull of $S$, then the intersection of $S$ with the supporting line perpendicular to $D$. If that intersection has more than one point you have to live with the ambiguity.

This is essentially @kimchilover 's solution in a comment.

The construction works in higher dimensions.

Whether it gives the answer for the southwesternmost point of Africa might depend on the projection ...

Not the answer you're looking for? Browse other questions tagged geometry definition recreational-mathematics or ask your own question.

3
If neither of two planar shapes are strictly convex, is it ever the case that they can only ever touch at one point?
0
Intersection of a 2-Dimensional body and a Line given west-most point and south-most point
11
Is there a way to relate convexity to Gaussian curvature?
3
How Does A Precessing Sphere Precess?
0
A kind of planar figures
2
How to find the original coordinates of a point inside an irregular rectangle?
3
Is a shape 'polarizable'?