Equation of a "tilted" sine

I would like to know what's the equation of a "tilted" sine, that looks like this (no idea how to show it better). 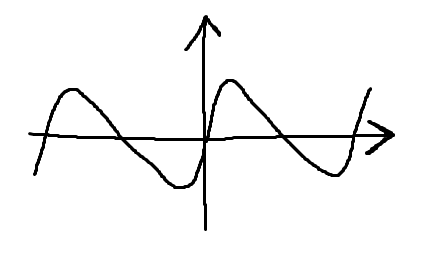 I remember first seeing this waveform in some kind of sound synthesizer, where one of the knobs for controlling shape of the sine was doing just what im looking for - gradually turning sine to sawtooth and vice versa.

I tried using fourier series on a sawtooth wave, and getting a couple of first sines together, but the result doesn't have that smoothness.

You can try this : 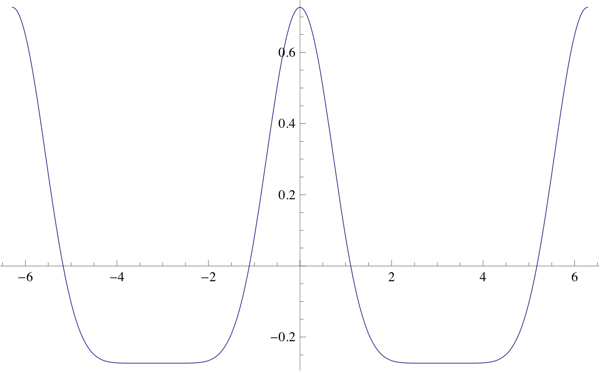 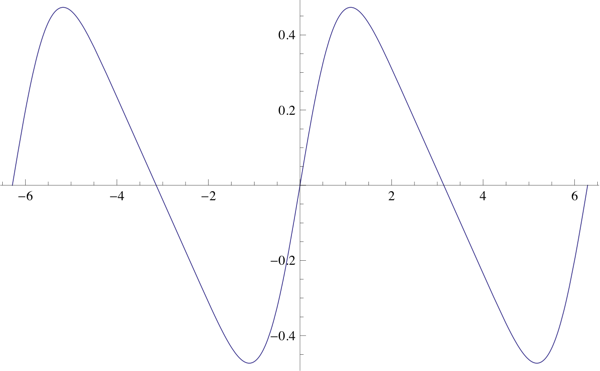 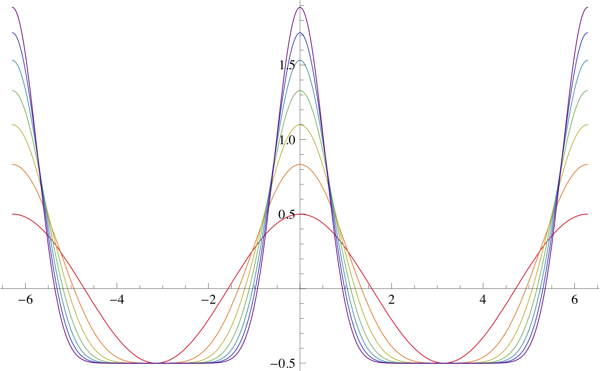 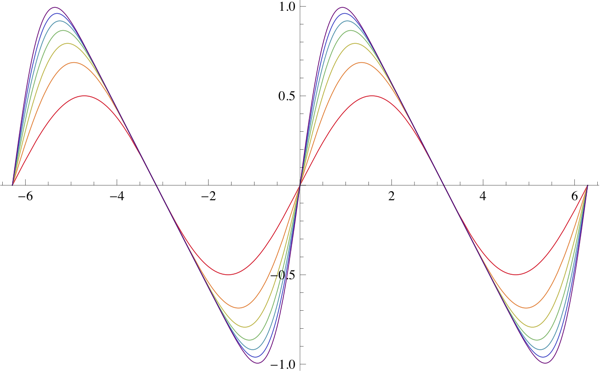 In the old signal generators, the section devoted to produce square and sawtooth waves, was commonly realized starting from a pulse train generator, in which the frequency and the pulse duration (duty cycle) were tunable.
From that, by (analogic) integration, and clipping a series of triangular and trapezoidal waves could be obtained.

The knob of your synthetizer was probably acting on a filter applied to a sawtooth wave. A low-pass (e.g. RC, or higher degree) filter should do the job.

The output of a simple RC filter

When the input is a discontinuous function, and since we are interested in the long term component of the output (the particular solution to the ODE above), it is not practical to apply the differential equation above directly, and we have better go by expressing the $v(t)$'s through a formal series, in practice the Fourier series. 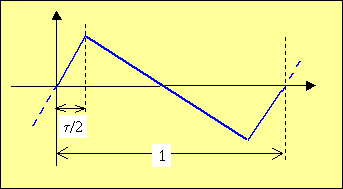 Finally, a comment on why the OP did not get a smooth result by taking the first few components of a sawtooth.
Doing that corresponds to apply an ideal low-pass filter, which is not a physically realizable device.
The RC filter is instead a physical device which, in spite of not being perfect, but introducing some attenuation and shift of phase in the frequency domain, provides the "smoothness" of the output signal.
The plot below shows the sum of the first $3$ harmonics from a sawtooth, and the corresponding first $3$ harmonics from the RC filter output.

with $-1\leq t\leq+1$ where the two extreme values of $t$ give sawtooths in opposite directions, and $t=0$ is simply a sinusoid. Intermediate values of t give nice smooth functions that do indeed look like "sheared sinusoids".

(When $t=0$ exactly, taking the formula literally gives you 0/0. The limit as $t\rightarrow0$ is $\sin x$, and for values of $t$ very close to 0, it may be numerically better to take a few terms of the series you'll find below under the heading "Motivation".) 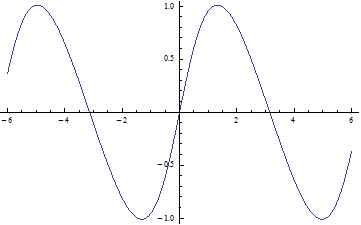 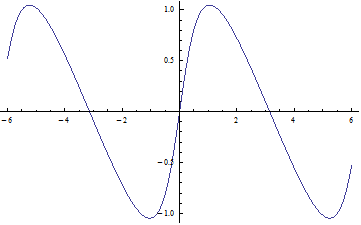 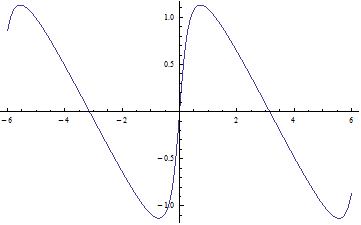 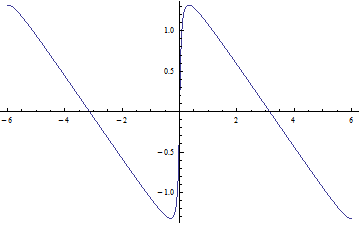 Relationship to some other answers:

Our function is obtained from a sawtooth by multiplying the terms of its Fourier series by $(\dots,t^2,t^1,t^0,?,t^0,t^1,t^2,\dots)$. (The series is two-sided; the $\sin nx$ term is a combination of $e^{inx}$ and $e^{-inx}$, which both need to be multiplied by $t^{n-1}$; we can replace the "?" with anything we like because the constant term in the Fourier series we're working with is zero.) Pointwise multiplication of Fourier series equals convolution of functions. One choice of that "?" makes the function we're convolving with equal $2\frac{\cos x-t}{1+t^2-2t\cos x}$; note that when $t=0$ this is just a sinusoid and that as $t->\pm1$ it approaches a delta function. So we can, indeed, think of this as starting with a sawtooth function and applying a linear filter that varies smoothly between doing nothing (convolving with a delta function) and smoothing everything into perfect sinusoids (convolving with a sinusoid).

This time you have to plot the graph to see what happens. Let's try with $\sin(x) + 0.3\sin(2x)$. OK, we're getting the tilt we want, but on the way down the graph has this weird wavey thing. Back to the drawing board.

Now sketch the graph you had together with the graph you want. At least when I did this, the graphs crossed one another a number of times. $6$ to be exact, alternating which one is largest and which is smallest. Thus the difference has three maxes and three mins in this period, kindof like $\sin(3x)$. So we try to add that.

Now, with $\sin(x) + 0.3\sin(2x) + 0.65\sin(3x)$ it's starting to look good. You can probably tweak the coefficients here a bit to get something even better. Just keep going until you're happy. You can also add higher frequency terms if you want, which will give you more tilt. But it will get more difficult to gauge exactly how to compensate out the high frequency waving.

Alternatively, you could try to sketch the derivative you want, and do the same with that, only with cosines. Higher frequency waves will be more prominent then, and hopefully easier to correct for.

You can look into the Clausen function which is a class of functions with this form and which has been implicitly described by another answer.

I think G Cab's answer is the best. Wouter's comment is also good because it invokes phase distortion and modulation, which are common techniques used in synthesizers.

As for my contribution, a professional developer of software synthesizers (who isn't me) shared an interesting idea on the forums over at KVR Audio.

Go to https://www.desmos.com/calculator. Copy and paste the following equation.*

Click on the "all" button next to "add slider".

Now you can fiddle with the kinds of waveforms this scheme generates.

* This technique is inspired by a geometric construct. The equation in human-readable form is

As G Cab said, a synthesizer generates such a waveform by low-pass filtering a sawtooth signal. 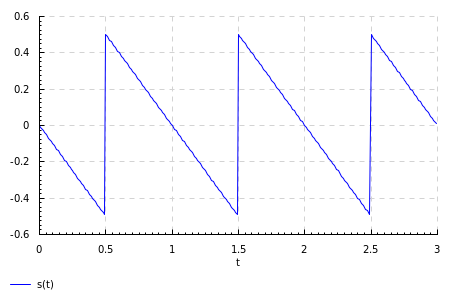 The low-pass filter is typically a kind of state variable filter. These are named so because there is a “state variable” that's governed by an ordinary differential equation dependent on the incoming signal. The simplest form, that can be build with just a resistor and a capacitor, can be written (I'm using PDE-convention notation for derivatives, i.e. $r_t = \frac{\partial r}{\partial t}$) $$ r_t(r,t) = \eta \cdot (s(t) - r(t)) $$ Because $r_t$ depends Lipschitz-continuously on $r$, the Picard-Lindelöf theorem tells us that the solution $r : \mathbb{R}\to\mathbb{R}$ is uniquely determined by this differential equation, in other words, the above equation for $r_t$ also defines $r(t)$.

But how does it actually look? Well, we can use numerical techniques to calculate an arbitrarily good approximation to the exact solution. A common method is the fourth-order† Runge-Kutta solver. Implemented in Haskell:

If we evaluate this for the above filter $r$ with a couple of different values for $\eta$, we get this result: 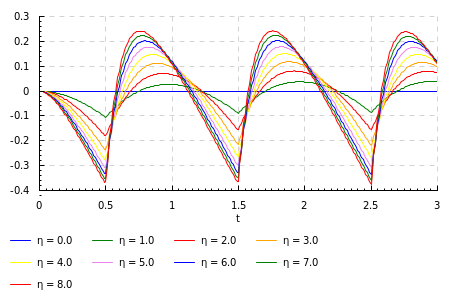 Well, this does appear to behave broadly related to the function you've described, but it's hardly the same thing. In particular, the result you get for low $\eta$ doesn't actually look much like a sine, it's still pretty spiky on the negative side, but already has a strongly attenuated amplitude.

And indeed that's also the case for a real analogue synthesizer: those never generate exact sine signals, only approximations‡. Im my example the deviation is extreme because I've used a very simple filter, which has only order 1. I.e., when I make $\eta$ small enough to get rid of the transient high-frequency components (the “edges”), then I must also sacrifice a lot of the base sinusoidial part.

With a suitable second-order filter, we can get a better result. That requires an additional variable $u$ to be solved: 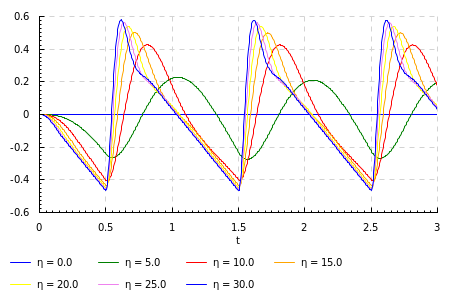 Still not perfect, but a really well-designed filter can get you very close to a real sine. Filter design used to be a big research topic. Nowadays it tends to be more practical to use digitally sampled signals, then you can just perform a Fourier transform, take whichever frequency components you want, and zero out or attenuate the rest to any amplitude you like.

†RK4 is arguably a bit overkill here. Because this filter is linear, a discretised form can actually be calculated much more efficiently and accurately as an IIR, using linear filter theory.

‡If the goal is really only to generate a sine, then you can actually get much more out of a simple 2nd-order filter than in my example, by using high resonance peak: you start out with only a very weak rectangular signal that's feeding a resonant LC circuit at the right frequency so the the output has a much higher amplitude. But this requires that the filter and oscillator are exactly in tune – in practice, they're generally back-coupled to a phase-locked loop, i.e. the oscillator is actually part of the filter resonance.

Not the answer you're looking for? Browse other questions tagged trigonometry graphing-functions or ask your own question.