What is the likelihood of two line segments crossing?

Randomly connect two sets of two to each other with line segments.

What is the chance of the line segments intersecting?

(I will maybe try and solve this with a little Monte-Carlo simulation but would be very interested in an analytic solution.)

Let's be perfectly clear about the assumptions. I assume that "randomly selecting 4 points" A,B,C,D in the unit square means selecting uniformly and independently at random their coordinates $x_A,y_A,x_B...$ in the $[0,1]$ range; and that one of the 6 possible pairings between points to form the segments is also chosen uniformly and independently at random -- so the problem is equivalent to asking what is the probability that, e.g. AC and BD intersect.

It's easy to see that the solution is $\frac{25}{108}$, or about $23\%$, if one is willing to take as a given the solution for Sylvester's four-point problem for the square -- the probability that the convex hull of four points chosen uniformly and independently at random in a square is a quadrilateral, which is $\frac{25}{36}$. It is immediate to see that two segments chosen by a random pairing of four points intersect if, and only if, the convex hull of the four points is indeed a quadrilateral, and the two segments are its diagonals. If the former condition is satisfied, the latter happens with probability $\frac{1}{3}$ (the probability that a given point is paired with "middle one" of the remaining three), yielding a solution of $\frac{25}{36}\cdot\frac{1}{3}=\frac{25}{108}$ for the original problem.

Sylvester's four-point problems allows one to obtain the answer in exactly the same way even if the points are chosen uniformly at random in another convex region, simply by multiplication by $\frac{1}{3}$. The general formula for Sylvester's four-point problem in a convex region $R$, as given in the above link, equals $1-4\frac{\bar{A_R}}{A(R)}$ where $A(R)$ is the area of the region (in the case of the unit square, $1$) and $\bar{A}_R$ equals the expected area of a triangle obtained from $3$ points chosen uniformly at random within it. The formula is easily obtained noting that probability that one given point lies within the triangle formed by the other $3$ is $\frac{\bar{A_R}}{A(R)}$, and since the events of this happening for different points are mutually exclusive, the probability that no point lies within the triangle formed by the other three is indeed $1-4\frac{\bar{A}_R}{A(R)}$.

So, in general, the probability of intersection of $2$ segments, each made by $2$ points chosen uniformly and independently at random from a regular $n$-agon or any of its affine transformations (such as a rectangle or parallelogram) is:

First let's select 4 points inside a square. Let $P_c$ be a probability that these 4 points form a convex figure (none of the selected points is inside the triangle formed by the other three).

If this is the case, the probability that two line segments intersect is 1/3.

Otherwise the probability is 0.

So, the probability we are looking for is:

Probability that any point is inside of triangle formed by other 3 is $P_1+P_2+P_3+P_4$ because no more than 1 of these outcomes can happened simultaneously.

And now we only need to find $S_{234}$ - expected area of a triangle formed by randomly selected 3 points inside a square.

This is in a good agreement with my experiments.

This is my approach:

Consider a line $y=mx+c$ that divides the unit square into two trapeziums. Let us call the left trapezoid $a$, and the right trapezoid $b$. 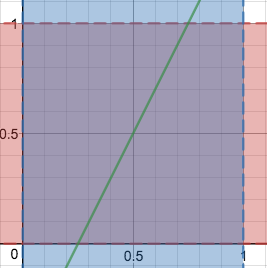 $$\color{red}{\text{if quadrilateral is convex}}$$ Lines segments drawn must be either sides or diagonals.

Only diagonals intersect.$$$$ $$\color{red}{\text{if quadrilateral is concave}}$$ No intersection

Not the answer you're looking for? Browse other questions tagged probability geometry or ask your own question.