So what I want to prove is:

Here's my (original) attempt. Could someone verify my proof is alright?

Note (Clément C.): As mentioned in the comments, this particular argument is faulty, since the "Lemma" used does not hold. (Specifically, it only holds for positive sequences (or negative sequences), but not those whose sign alternate.) A proof of convergence (or divergence) of the original series would be quite interesting.

Observe also that the alternating series test does not seem to apply here, as even with the Prime Number Theorem it is not obvious (and may be false) that the sequence $\left(\frac{n}{p_n}\right)_n$ is non-increasing. Moreover, it is not clear that the "usual" remedy for this (i.e., performing a Taylor series expansion of $\lvert a_n\rvert$ to get a constant number of terms which constitute, each by itself, non-increasing sequences; until a last term is reached which is the term of an absolutely convergent series) can be applied here, as such a series development appears to only give very slowly decreasing terms. (That is, reaching a term whose seriess absolutely convergent does not seem to happen within a constant number of terms).

May be it could have a chance of being solved using Cramér's conjecture for the gap $O(\ln^2 n) \geq g_n \geq 2$ (i am not sure since its not solved).

But this is clearly not sufficient to conclude, the sequence not being decreasing. There is a plot of the partial sums of the series, showing why it could converge, but at such a slow rate that we'd probably need super-strong versions of the Cramer conjecture on the prime gap to show it 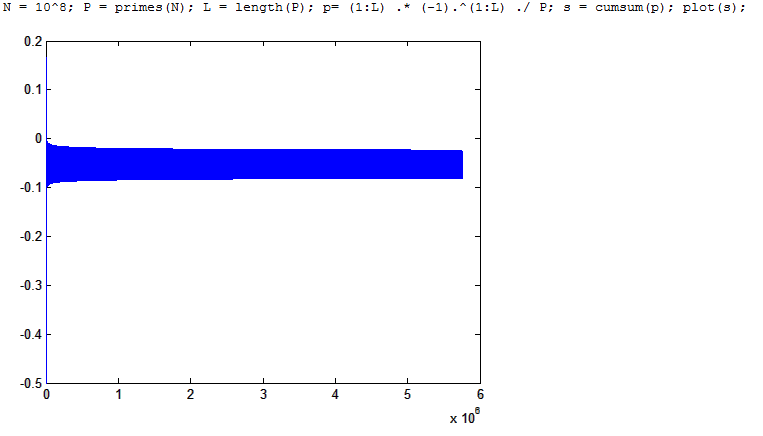 Not the answer you're looking for? Browse other questions tagged number-theory proof-verification prime-numbers or ask your own question.

5
Sum of alternating reciprocals of logarithm of 2,3,4…
1
What is the density of consecutive primes which have gaps too small or too large from the average ?