Given a set of digits, what is the biggest number we can make using exponentiation - numberphile noodle quiz

The question is motivated by a question on a can of number noodles. 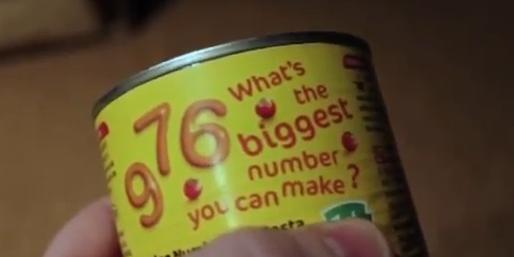 In this youtube video, username numberphile (who does enthusiastic number theory videos for the layman) presents the digis of his can and brings forward the following generalized question:

Given a set of digits from my noodle can, what's the biggest number you can make using only

So here my thoughts:

Generally, I'm given a multiset of digits and I can use up any of these together two form numbers greater than $9$. And each of the three operations is binary, i.e.

and only the last one isn't commutative and associative. The question seems to imply we can use bracketing as we like, so I won't bother about these.

I can decide the first two tasks simply by checking if the concatenation of digits is better than binary operation for accieving big numbers: Given $n+1$ digits $(d_0,d_1,d_2,...,d_n)$, their concatenation

gives us summands involving higher and higher powers of $10$.

i.e. $\text{con}$ is stronger than multiplication for any free digit.

However, checking some pairs of digits for the third operation

I can see no obvious pattern! The algorithm to construct the biggest number will depend on the values of the symbols. So my first question is this (the question in the video):

(c) Using concatenation and exponentiation, what is the biggest number you can make? How can you show that it is really is the maximum?

I guess that proof should be done in general, but here are the specific digits of the problem: 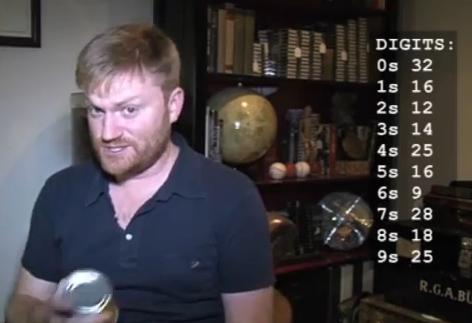 I'm just going to assume no available computer will be able to compute that absurd power, but I'd be interested in some of its characteristics nevertheless.

For each number $N$, there are a fixed number of possible bracketings, like e.g. $(a,((b,c),d))$, which determine the result, $a^{(b^c)^d}$ here. I guess the bracketing is a simple (downwards) tree graph where each node has eighter none or two (downwards) offspings. One should be able to count these.

The amount of of different numbers for the binary operation (exponentiation is of primary interest here) one can generate is limited by the quantity of number sets you can build using concatenation of digits and the number of braketings for each set size. How many different filled bracket structures can you have?

And much more difficult:

Taking into account that different such structures can end up in the same number: What is the quantity of different results you can have? Is there a workable method of working out the "kernel" of this construction?

As we deal with high number of digits here, the majority of results have relatively low Kolmogorov complexity. Given a certain operaton (e.g. exponentiation), the biggest number we can generate and the number of results we can have, can we conclude a pattern regarding the gap size between different biggest numbers as a function of the numbers of digits we use as input?

This is just a scketch of a solution:

Now the only thing left is understand how concatenate $0$s and $1$s, and what are the inner few steps, fixing these thing give an optimal solution (just exponentiate fromn smallest to biggest, until the last few steps).

For the inner few steps, if the biggest number that you have is bigger than the "decent" $x$, you already have a solution, otherwise few tries can be needed to found the optimal inner steps (eg. given three $2$, the optimal form is $2^{22}$ instead of $2^{2^2}$).

I suggest the following greedy strategy:

Not the answer you're looking for? Browse other questions tagged combinatorics elementary-number-theory arithmetic puzzle big-numbers or ask your own question.

11
How to calculate the number of decimal digits for a binary number?
7
Given $a,b$, what is the maximum number which can not be formed using $na + mb$?
1
Biggest consecutive block-repeating in a binary string
1
How many different numbers can you make with the following digits?
1
Given the following specific lottery conditions, what is the minimum number of tickets needed to win?
1
Formation of a 7 digit number using 3 digits with given condition
0
Biggest and lowest number below N that you can get multiplying two number of K and and L digits
2
How many numbers from given set of digits?
0
The number of five digit natural numbers which contains exactly two distinct digits?
1
Getting two different answers for the question: How many $5$-digit numbers chosen from the set $\{1, 2, 3, 4\}$ contain all the digits?