Essential singularity: Residue at $0$ or $\infty$?

All my doubts came from the following exercise:

find the singularities of the function in $\bar{\mathbb{C}}$ and specify their nature (removable, pole of order $N$, essential singularities) and the residue at these points.

Last I tried computing with Mathematica the series and the result and I got: 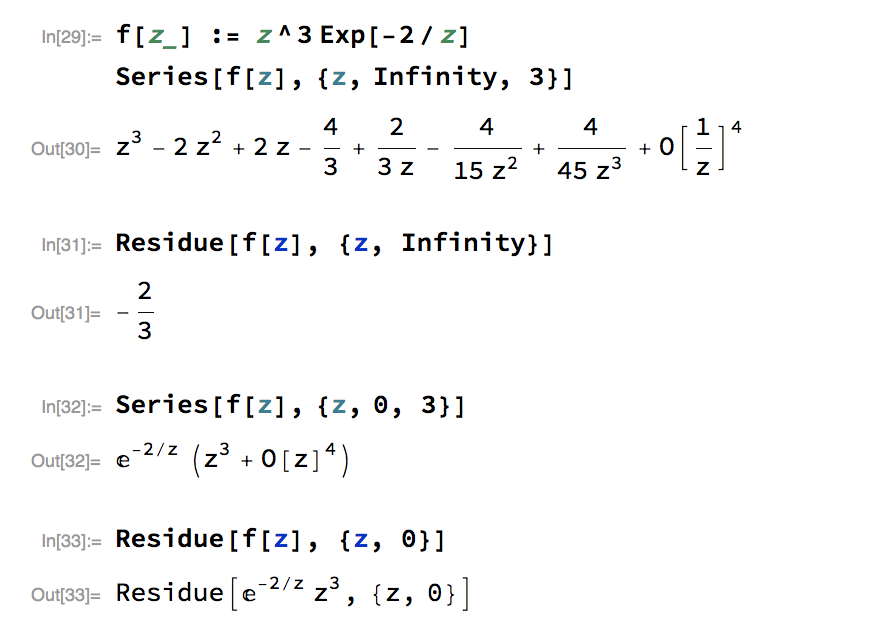 Basically Mathematica in $0$ is not computing results, while in $\infty$ it's giving me the same series that I thought I get in $0$, but the residue computed at $\infty$ is the same that I got with my calculations.

What's going on? Am I calculating the series in $\infty$ without knowing? And if it's so, how is it possible that the residue at $\infty$ is the opposite of the $c_{-1}$ at $\infty$?

What you did to compute the residue at $0$ is correct.

How exactly do you define the residue at $\infty$? A definition I'm working with is: $\DeclareMathOperator{\Res}{Res}$

A result which follows from this definition is:

Laurent series can't be about $\infty$; they are always about a finite complex number. They are power series, so that's the only thing that makes sense!

When you ask for the series at infinity, what you're telling Mathematica to do is to give you the series for which $\infty$ is in (or on the boundary of) the domain of convergence. Mathematica seems to default to picking 0 as the center when you ask this.

Regarding the series around zero.... I don't think Mathematica explicitly documents its semantics, but presumably what's going on here is that the series command intends to return a finite approximation. For example, something of the sort

The problem with your example is there aren't any finite approximations. The essential singularity means that you need all of the leading terms to get an approximation near $z=0$.

So, what Mathematica does is it instead factors out an analytic function expressing the essential singularity, and then gives a series approximation for what's leftover.

Not the answer you're looking for? Browse other questions tagged complex-analysis residue-calculus laurent-series singularity or ask your own question.