When is it possible to inscribe sphere in parallelogram pyramid?

I'm learning about basics of solid geometry connected with pyramids. I've solved some problems with tetrahedrons, regular pyramids etc. and now I'm trying to solve problem about quite unusual setting - pyramid with parallelogram in base (it can be any pyramid, the only requirement is that it has parallelogram in base). I'm wondering when is it possible to inscribe a sphere in it that touches all five faces. I've tried to imagine it, but my imagination is not that good.

In general, a sphere can be inscribed in a pyramid if the bisectors of the dihedral angles formed by its lateral faces all meet on the same line. This is always true, for any shape of the base.

To show an example, let's see what kind of pyramids with rectangular base admit an inscribed sphere. Suppose we have a rectangle $ABCD$ as base, with $AB=2b$ and $AD=2a$, and let vertex $V$ be at a distance $VH=h$ over the base plane, with its projection $H$ lying on a median axis of the rectangle, at a distance $OH=x$ from the rectangle center (see diagram below).

The condition that the bisectors of the dihedral angles formed by the lateral faces meet on the same line is satisfied if we can find a quadrilateral section of the pyramid where a circle can be inscribed, and perpendicular to the line joining vertex $V$ with the center of the circle.

In our case, as $AB\perp VM$ (where $M$ is the midpoint of $AB$), we can conveniently search such a section in the form of an isosceles trapezoid with bases $AB$ and $EF$, with $EF$ at a distance $FL=h'$ over the base. A circle can be inscribed in $ABEF$ if $AB+EF=2AF$, while the condition that the trapezoid is perpendicular to the line joining $V$ with the center of the circle is satisfied if $VG=VM$ ($G$ midpoint of $EF$). 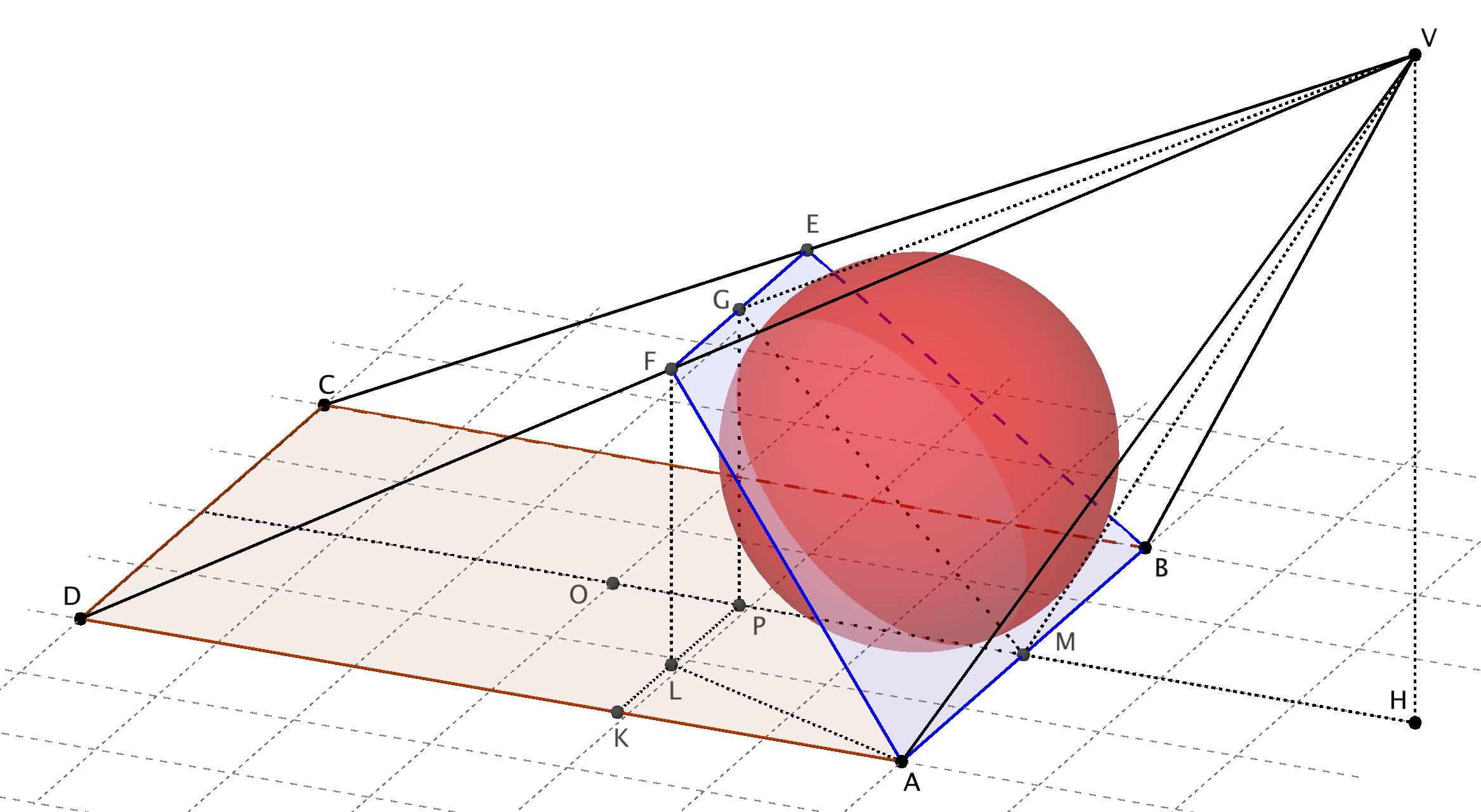 Of course I chose a particularly simple and symmetric setting, but this example should give an idea of how to handle more general cases.

In fact, your question is rather trivial: If the pyramid is non-degenerated, it is always possible to inscribe a sphere in it. More precisely, for every point that is inside the pyramid you can find infinitely many spheres that are centered in this point and are inside the pyramid.

A more interesting question would be if it is always possible to inscribe a sphere that touches all five faces of the pyramid. I think that this is not possible. In $\mathbb R^2$, there are parallelograms for which it is not even possible to inscribe a circle that touches every side of the parallelogram. My intuition tells me that the situation in $\mathbb R^3$ is even more complicated, but I may be wrong here.

Not the answer you're looking for? Browse other questions tagged geometry spheres solid-geometry or ask your own question.

2
When is it possible to inscribe sphere in parallelogram pyramid? Additional questions.

0
Right pyramid with a concave polygon as base?
3
How to calculate the volume of an arbitrary pyramid without calculus?
8
Tetrahedron packing in Cube
3
Canonical Pyramid Polynomials
2
Sum of areas of opposite faces in a parallelogram-based pyramid with an inscribed sphere
2
Intuitive demonstration of the formula giving the surface of a sphere.
2
When is it possible to inscribe sphere in parallelogram pyramid? Additional questions.