Intuition why a combined inscribed and circumscribed polygon converge faster to $\pi$?

I was playing around a little with approximating $\pi$ by calculating the perimeter of a regular polygon both inscribing and circumscribing a circle.

with $\pi_i(n)$ and $\pi_c(n)$ the approximation of $\pi$ from an inscribing and circumscribing polygon respectively.

But $\pi_i(n)$ and $\pi_c(n)$ are always a lower and upper bound respectively for $\pi$. Therefore I thought that taking the average should give a better result, which indeed reduced the error. However the rate at which the error gets smaller as $n$ increases was the same as the previous two. When I started using different weights I found the following expression gives the best result

Graphing the errors of these approximations gives: 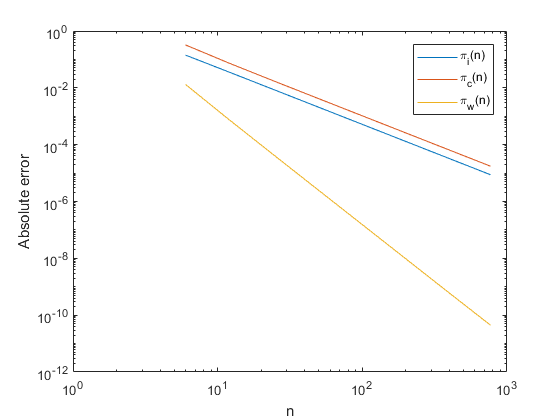 These converges rates can be explained by looking at the Taylor series of each expression. However I am curious if this could also be explained with pure geometry. 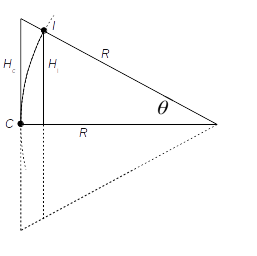 By symmetry, we can discuss the approximation of $\pi$ on an angular sector $\theta=\tfrac{2\pi}{2n}$ of the inscribing and circumscribing polygons (see the figure).

Denoting $H_i$ and $H_c$ the half-side of these polygons, \begin{align} H_i&=R\sin\theta\\ H_c&=R\tan\theta \end{align} Their length are related to the lower and upper approximations of $\pi$ by \begin{align} \pi_i(n)&=2n\frac{H_i}{R}\\ \pi_c(n)&=2n\frac{H_c}{R} \end{align} They approximate the length arc of circle $IC$, noted $S$, which would give the exact value of $\pi$. The question is then to find the value of the weight $\alpha$ which minimize the difference between the lengths of the arc and the weighted approximation: $\varepsilon=\alpha H_i+(1-\alpha)H_c-S$ for $n\to\infty$.

Not the answer you're looking for? Browse other questions tagged geometry approximation pi or ask your own question.

3
What does Spivak want me to do?
0
Which of the following are possible measures of the exterior angles of a polygon and how many sides does the polygon have: 90, 80, 75, 30, 46, 36, 2
6
Smallest circumscribed polygon around regular polygons
0
Prove that, for any polygon, taking all pair of adjacent angles, subtracting 180 from their sum, and adding all the results together equals $180(n-4)$
1
Why is the sum of all external angles in a convex polygon $360^\circ$ and not $720^\circ$?