Why are tangent circles entirely inside or outside the other?

I'm trying to formally show that if two circles $\Gamma$ and $\Gamma'$ are tangent at $A$, then $\Gamma'$ lies either entirely inside or entirely outside $\Gamma$. 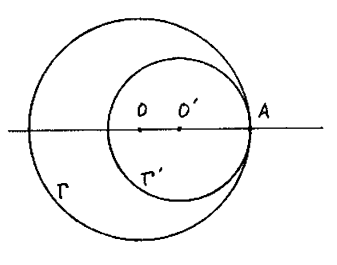 I'm not sure what axiomatization of Euclidean Geometry you're using, and what results you are considering as given at this point, but are there any reasons why you cannot use the triangle inequality to show that $OB<OO^{'}+O^{'}B$? Then since $O^{'}B=O^{'}A$, you would have that $OB<OA$. (You have claimed that I can take as given that $O$, $O^{'}$, and $A$ are colinear).

0
What would be the nature of tangent line when the point is inside, outside and on the circle?
6
Find circles that completely cover a polygon minimizing the amount of space covered outside the polygon
1
Find point inside circle but outside of n- other circles
2
Tangent to conic stays outside or between (elementary)
0
inscribed circles inside circle
0
Does the line connecting the centers of two externally tangent circles contain the point of tangency?
0
If a circle lies entirely inside another, but is not concentric with it, can their radical axis be closer to the smaller circle?