Why only orientation-preserving transformations are considered when integrating forms?

The volume form is known to be invariant under a change of coordinates $T$ with $\det(T)>0$, so consequently integral of forms are also invariant. But what happens when the change of coordinates has $\det(T)<0$? Is the integral invariant under transformations with negative determinant? In Calculus of one variable, when the determinant is negative one would just reverse the limit of integration, why we don't do the same when dealing with forms? In Calculus of multivariable, the absolute value of the determinant is taken, so I guess my question is related to why there's an absolute value there (is it put by hand or does it show up naturally?).

$\newcommand{\di}{\mathrm{d}} \newcommand{\de}{\partial}$ All kinds of coordinate transformations can be considered when integrating forms. The integral of an $n$-form over an $n$-dimensional submanifold is independent of any coordinates, so it's "invariant" no matter which coordinates we use and no matter their orientation. See below.

Sometimes people prefer to use only coordinates with the same orientation in order not to think about absolute values of determinants. Such absolute values appear in the coordinate transformation of a particular kind of forms. Typically, "volume form" are of that kind. 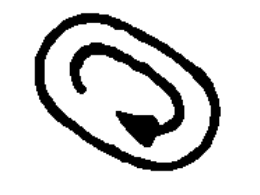 and of outer-oriented 2D submanifold in 3D space: 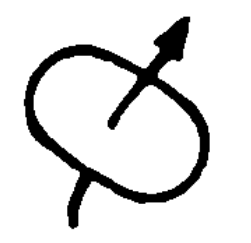 The first has a circulation sense on it; the second a flux direction through it. 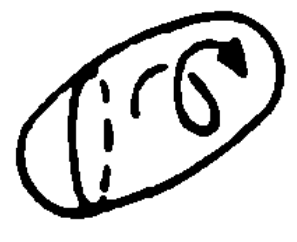 and of outer-oriented 3D submanifold in 3D space: 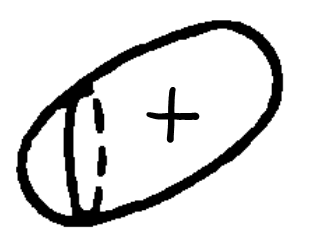 Many integrals typically considered in the sciences do not require an inner orientation (a screw-sense in the example above), but an outer orientation. For example, if we calculate the total mass in a region of space from the mass density given there, we don't care about any screw-senses in that region.

In the case of the Möbius strip, for example, imagine that a 2D mass density is defined on it – some parts have more mass, some have less mass. It's clear that we can ask what the total mass of the strip is, and we must be able to calculate it by integrating the mass density all over the strip. But wasn't the strip non-orientable? how is such an integral possible, then? It's possible because we're considering it as an outer-oriented manifold, and as such it has a well-defined "$+$" orientation. And we integrate an inner-oriented 2-form over it – the mass density – to get its total mass.

This is the standard kind of form discussed in most differential-geometry textbooks. It's also called an "even" form.

Its outer orientation at a point is the same as that determined by the coordinates if $\omega_{1\dotso n}>0$, and opposite otherwise.

Under a change of coordinates to $(x'_i)$ its new component is given by $$\omega'_{1\dotso n} = \omega_{1\dotso n}\; \det\tfrac{\de x_i}{\de x'_j}$$ without any absolute values for the determinant. From this formula it's clear that the outer orientation of $\omega$ at a point doesn't depend on the coordinate system. If we change to coordinates $(x'_{i})$ with orientation opposite to $(x_{i})$, we'll have $\det\tfrac{\de x_i}{\de x'_j}<0$, and this determinant in the above formula will automatically flip the sign of $\omega'_{1\dotso n}$, so that the outer orientation of $\omega$ is the same.

In fact the sign of the determinant in the expression above automatically takes care of the orientation of $C$. If in the integral above we had taken the absolute value, the integral would have been for the domain with orientation induced not by the map $F\colon U \to C$, but by the coordinates $(x_{i})$ -- an orientation we don't care about. If the two orientations coincided, that is if $\det\tfrac{\de F_i}{\de u_j}>0$, there'd be no problem. But if the two were opposite, $\det\tfrac{\de F_i}{\de u_j}<0$, we would need to put a minus sign in front of the integral if the determinant were taken in absolute value.

Inner-oriented forms are also called "odd" or "twisted" (see refs below), and they are related to tensor densities. Note that "volume elements" are typically inner-oriented forms, not standard, outer-oriented ones as those described above; see Marsden & Ratiu [2007] and de Rham [1984].

The inner orientation of $\omega$ at a point is given by the sign of $\omega_{1\dotso n}$.

From this formula it's clear that the inner orientation of $\omega$ at a point doesn't depend on the coordinate system, because the original sign of $\omega_{1\dotso n}$ is preserved.

The absolute value in the expression above takes care of the fact that the component of $\omega$ has a different transformation, and that the outer orientation of $C$ has nothing to do with the coordinates $(u_i)$ (which define an inner orientation instead). You can easily verify that changing coordinates gives the same result.

Not the answer you're looking for? Browse other questions tagged integration differential-geometry differential-forms change-of-basis or ask your own question.

6
The area form of a Riemannian surface
3
Confusion over the definition of a volume element
2
Orientation and the change of variables formula for integration
1
Multivariable Substitution Rule VS Pullback of Volume Forms
2
From Single-Variable Integration to Multivariable Integration: What Happened to the "Problem" of "Signed/Net Area"?
0
How are differential forms on $\mathbb{R}^n$ independent of coordinates?
0
The Determinant, Tensors, and Orientation
1
Matrix change of basis, versus vector
0
How can the components of the metric in one chart be used to construct an endomorphism with "the same" components?