I'm new with Maple and I'm trying to follow the tutorial about the 'CylindricalAlgebraicDecompose' command.

My question is probably very simple for anyone who knows how to use the program.

All I tried to do was to follow the following link and to get the same results as in the link (I added below the link and a screenshot from the link of the results I tried to get: 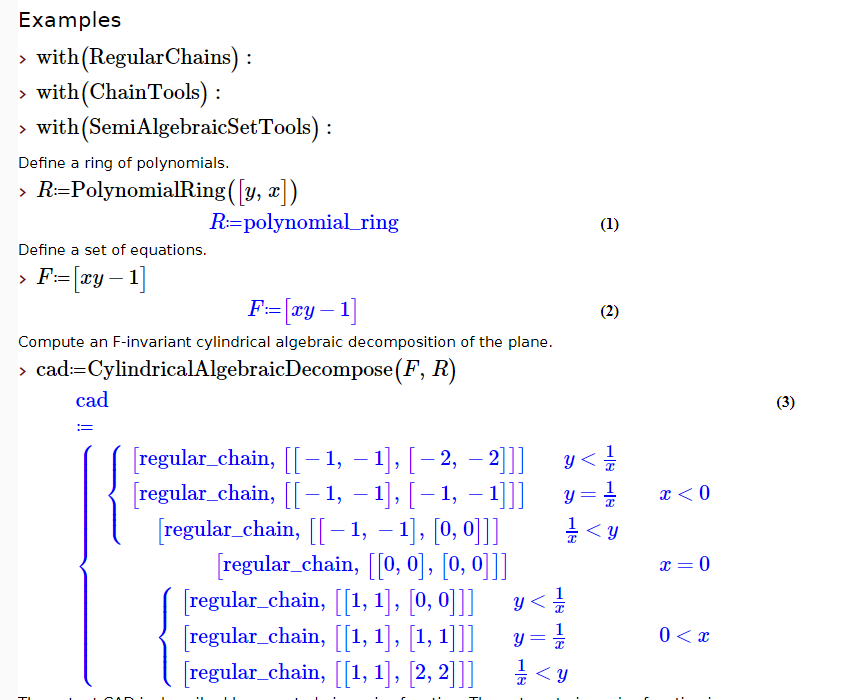 But this is what I actually got in my computer:

Can anyone tell me why I'm not getting the same results and what should I change in the commands?

Your problem is that you entered (in 2D Input mode),

where that contains the name xy instead of the product x*y.

In both 1D (plaintext) Maple Notation input mode as well as 2D Input mode you could enter it like,

with an explicit multiplication symbol.

In 2D Input mode you could also use a space between the names intead of the * symbol, which denotes the multiplication implicitly. That is what is being done in the actual Help page image you posted.

The visual cue that one has used such implicit multiplication in 2D Input mode is subtle -- a slight space between the letters x and y in this case.

Failure to recognize 2D Input implicit multiplication is a common problem, mostly because of the lack of visual cues.

If you have problems with 2D Input mode, and the Document interface, then you can change those to 1D Maple Notation and the Worksheet interface as a pair of preferences under the Tools->Options menubar item.

Not the answer you're looking for? Browse other questions tagged maple or ask your own question.

0
How can I get a list of large numbers in decimal form in maple?
0
How to load Maple package ??
4
Fourier transform of $\frac{\arctan(x)}{x}$
0
Working with Maple toolbox for Matlab
2
Writing out a Maple-integrated Function does not work as intended
3
Can commands in GAP be executed and results be used from another software, like MATLAB or Maple?