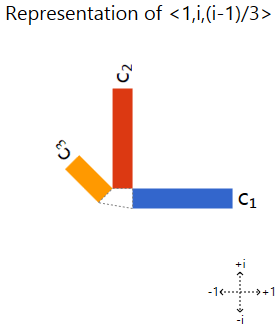 One can also directly show that a real matrix $A$ with complex eigenvalues describes a rotation (possibly followed by a rescaling) in the basis of the real and imaginary parts of the corresponding eigenvectors. More precisely:

In conclusion, the real and imaginary parts of the eigenvector corresponding to a complex eigenvalue span a two-dimensional plane which $A$ leaves invariant, and $A$ acts as a two-dimensional rotation matrix with respect to some basis chosen in this plane. More explicitly, we are saying that $$A = r P R(\theta) P^{-1},$$ where $R(\theta)\in\mathbf{SO}(2)$ represents the rotation by an angle $\theta$, and $P$ is the matrix whose columns are $\mathbf v_R$ and $\mathbf v_I$.

Not the answer you're looking for? Browse other questions tagged linear-algebra matrices eigenvalues-eigenvectors rotations geometric-interpretation or ask your own question.