Even counting square by square each one of the figures, I can't find where is the mistake or the problem.

The slope of those two triangles are not the same and therefore it creates a gap in diagonal area which is equal to the area of that little square. 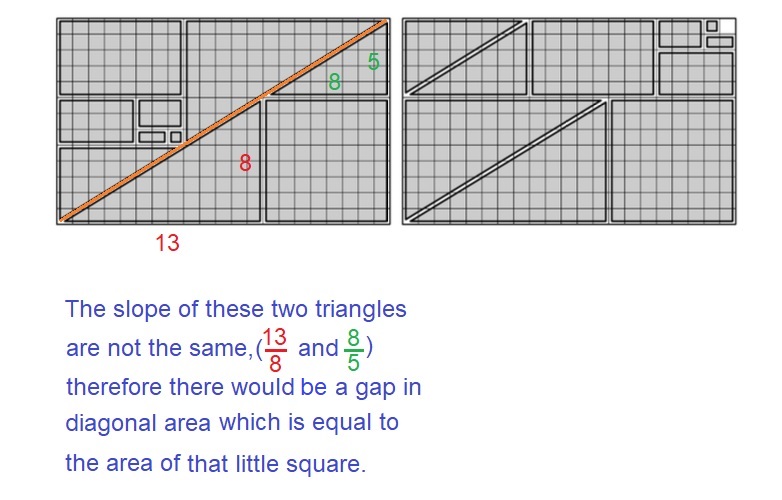 Note that the sides of the large rectangle are $13$ and $21$ which have no common factor. Therefore the diagonal of the large rectangle does not pass through any grid points. It follows that the points at which the two lower triangles and two upper triangles meet in the first dissection are in fact just off the hypotenuse, and the sides which look as though they track the hypotenuse in fact form a thin parallelogram of area $1$.

If you do the math, you'll find that the angle of the larger triangles is not the same of the smaller triangle, even though they look the same (indeed, thinking about the slope: the one has slope $\frac{13}{8}$, and the other $\frac{8}{5}$, which are almost the same, but not exactly the same. Hence, one figure will have a very slight overlap of the triangles, while the other will have a very slight gap between the triangles. Of course, by leaving a small space between the objects you don't notice that.

Another way of looking at this: look at the top largest triangle of the left figure. The sides are 13 and 8, and they make it look like it goes exactly through a gridline point when from the right angle point you go sideways 5 and down 5. Hence, they make oit look like the larger triangle is composed of a 5x5 square, and two smaller triangles with sides 3 and 5, and 5 and 8, respectively. But again, note that while $\frac{5}{3}$ and $\frac{8}{5}$ are almost the same, they are not exactly the same, so these two triangles would have a different slope. So, if the big triangle would really go through that point, it would not be a triangle at all! So the big triangle does not go exactly through that gridline point.

By this trick, you can get Infinite Chocolate

The left-hand dissection is fake. The large and small triangles don't really fit together because the slopes of their hypotenuses are slightly different.

Not the answer you're looking for? Browse other questions tagged geometry analytic-geometry triangles or ask your own question.

3
Find radius of the Smallest Circle that contains this figure
3
How to find the length of this geometry figure
5
The area problem!
0
In this figure find AC=x
2
In the following figure, prove that $AC$ bisects $GH$.
3
Is there a solution to this problem that doesn't involve too much analytic geometry?
2
Minimize distance between figures while satisfying some constraints
0
Forming Squares or Rectangles from a Group of Squares and/or Rectangles Problem
2
Construct a square given a point and two lines.
4
An equilateral triangle is drawn in a circle with one of its vertices on the diameter. What is $x$ in the figure?