How can the binomial theorem be proved? [duplicate]

So, I'm studying mathematics at a college level, and not very long ago I had a teacher tell us that the binomial theorem is as follows:

With virtually no form of proofing at all. Is there a way of proving this without doing basic crunch work and substituting in as many values as possible?

You can also prove it by induction:

which is clearly correct.

Now in the second sum, introduce $l=k+1$ to get

which concludes the proof.

Short answer is yes. Seeing as this is the grand total of exposure you have to the binomial theorem, I'll stick to a non-rigorous proof, but lets do as you did and start with the crunch work;

From here, you might notice that actually, the coefficients map Pascal's triangle: 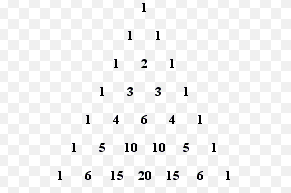 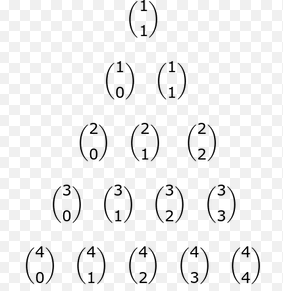 in which the rule of thumb is $\displaystyle {n \choose k}$, where $n$ is the row number, which also corresponds with the degree of the expansion, and $k$ is the position along the row, which also corresponds with the position of the term. Now, don't worry too much about the reliability of the triangle, as it was originally discovered as an array of known binomial coefficients by Blaise Pascal, and is hence therefore almost solely dedicated to identifying binomial coefficients.

So now we have the coefficients, $\displaystyle {n \choose k}$ and the variables with their degrees $\displaystyle a^{n-k}b^k$, and hence all that's left is to add all the terms together using the method of summation as follows:

which corresponds exactly to the given theorem.

I assume that you are given the definition

and want to see how the binomial theorem is proven from this definition.

You can compute the Taylor series for $f(x) = x^n$ around $x=a$. The derivatives of this function are:

It's not hard to see that

and consequently, the Taylor series about $x-a$ is

(aside: I am implicitly using the fact that $x^n$ is known to be an analytic function of $x$)

If $n$ is a nonnegative integer, we can simplify

and so the sum simplifies to

Incidentally, this formula also works when $n$ is an arbitrary complex number. If we define the (generalized) binomial coefficient to be

whenever $k$ is a nonnegative integer, then we still have the identity

The Binomial Theorem can be proved from Taylor's Series. I've been working on these proofs so I'll just include the Dropbox links for them. As far as real positive integers go :

If you are unfamiliar with the Maclaurin Series (it is a special case of Taylor Series), I've also included documents that will hopefully help with that.

Not the answer you're looking for? Browse other questions tagged combinatorics algebra-precalculus binomial-theorem or ask your own question.

7
Can the Binomial Theorem be proved probabilistically?
2
Solving a system of equations with natural numbers?
1
Proving the binomial coefficients by induction (half-done, but need help)
4
Expected value of max of three numbers
1
Number of possible arrangements of rings on a hand
1
How do I solve the chessboard problem?
3
How many palindromes are there in the range $0000$ to $9999$?
2
Sum with Binomial Coefficients to Floor Function