I'm not too familiar with formal analysis so I'm probably thinking about this all-wrong. I have looked at several posts on SE on big-O notation. The closest to my query seemed to be this one, but it didn't quite get at my difficulty...

My main difficulty, however, is reconciling this formal definition with the more wordy definition of "$f(x)\in O(g(x))$ means $f$ has a rate of growth that is smaller than or equal to that of $g$".

I was trying to figure out how these two definitions are equivalent, but was having some trouble with it. Going from the first to the second definition, I have say

but then I don't think there is anything more I can say. I was trying to show that the derivative (rate of growth) of $f$ must be less than that of $g$ but the problem is that, even though $f(a)\leq c(g(a))$ is the definition form my lectures holds (where x=a is included), I cannot say that $cg(x)-cg(a)\geq f(x)-f(a)$. And even a sketch shows that this need not be the case: 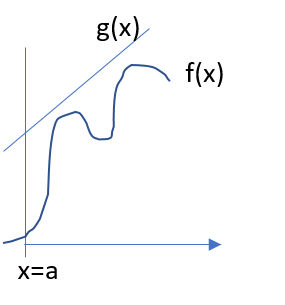 So then I thought that perhaps the definition with regards to the rate of change applied only to the case of $a=\infty$, but again I have trouble proving this because f could be wiggling around below g all the way up to infinity, so it is difficult to talk about gradients.

Perhaps I am thinking about this wrong and Big-O notation refers to approach on a global rather than local scale? So in places it can indeed be the case that the rate of growth of f exceeds that of g, but not overall or else f would eventually overtake g?

As in that example: When using the "rate of growth" language, we are probably thinking that both $f$ and $g$ go to $\infty$. So we are asking whether one of them goes to $\infty$ faster than the other.

Not the answer you're looking for? Browse other questions tagged real-analysis analysis limits asymptotics or ask your own question.

4
Little 'o' / Big 'O' Definitions
1
Big-theta notation
2
Does the big o notation always denotes the grow rate of the function?
4
What is the relationship between big O notation and the limits of functions?
3
Questions about Big-O notation
0
Dropping smaller terms in Big O notation
1
What does $n_0$ mean when describing Big-O notation?
1
Using the formal definition of big O notation, would f(x) not be O(g(x)) for nearly all functions of g(x)?