Minimal sphere around a polyhedron

I am writing about (convex) polyhedra (in 3-dimensional Euclidean space) and am trying to determine some symmetry groups. It would be very good to be able to say that every polyhedron has a unique sphere with minimal radius containing it. If this were true, then the center of this sphere would be preserved by the symmetries of the polyhedron (because they preserve distances) and these symmetries would be easier to determine (since they would have a fixed point).

Now, I have two related questions and I would appreciate also partial answers:

(1) Does such a unique minimal sphere always exist? Is there an appropriate restriction on the type of polyhedra considered that guarantees its existence?

(2) If such a sphere exists, it cannot, in general, touch all vertices of the polyhedron. So can the sphere be characterized in other ways? What kind of point is the center of this sphere?

Now, about the minimal sphere: for every compact $K$ there exists a sphere of smallest radius containing $K$ and such a sphere is unique. The existence is not that hard ( use a compactness argument). The uniqueness follows is proved like this: the intersection of two distinct spheres of radius $R$ is contained in a sphere of radius $< R$. Again, as you mentioned, every isometry of $K$ preserves the center of this sphere. If $K$ is convex then the center lies in $K$. For a general compact $K$ , the center of the minimal sphere lies in the convex hull of the intersection of the minimal sphere with $K$ ( thanks @Christian Blatter: for correcting an previous erronous statement).

Now, it is not true in general that $C_K$, the center of mass, is the center of the smallest sphere, as one can see already in the case of triangles, but that is the case if the group of isometries of $K$ is large enough ( if there exists only one point fixed by all the symmetries of $K$).

You can reason on the vertices alone, by convexity the edges and faces are wholly included in the minimal sphere.

For vertices in general position, the sphere touches exactly four of them. And the center is... the center of the circumscribed sphere. 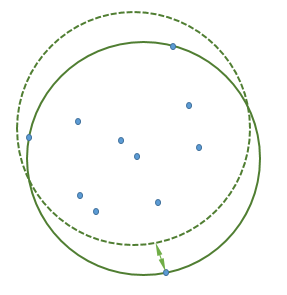 Not the answer you're looking for? Browse other questions tagged geometry euclidean-geometry polyhedra polytopes or ask your own question.

11
Chebyshev center = center of mass?
1
How to scale a polyhedron contained a 3-sphere?
2
convex polyhedron edge property
2
Classification of, Information Regarding Particular Family of Polyhedra:
0
Proving vertex-transitive polytopes can be circumscribed
2
Can a polyhedron, made solely of regular pentagons and regular hexagons, be made with an arbitrarily large number of hexagons?
4
Why are there nine regular polyhedra?
5
Can every polyhedron be inscribed in a sphere?
5
Why must an isotoxal polyhedron or tiling be isogonal or isohedral?
2
Polyhedron with faces that are not flat